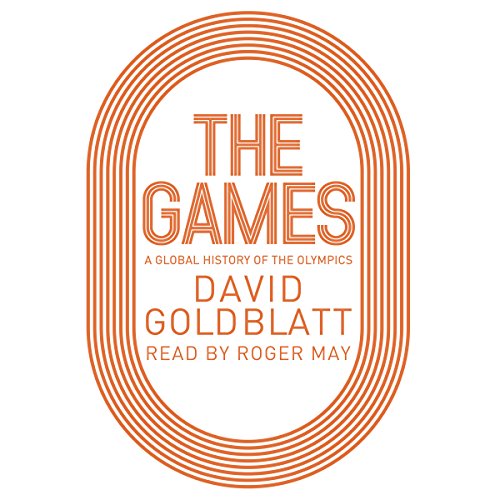 By: David Goldblatt
Narrated by: Roger May

The Olympic Games have become the single greatest festival of a universal and cosmopolitan humanity. Seventeen days of sporting competition watched and followed on every continent and in every country on the planet. Simply the greatest show on earth.

Yet when the modern games were inaugurated in Athens in 1896, the founders thought them a 'display of manly virtue', an athletic celebration of the kind of amateur gentleman who would rule the world. How was such a ritual invented? Why did it prosper, and how has it been so utterly transformed?

In The Games, David Goldblatt - winner of the 2015 William Hill Sports Book of the Year Award - takes on a breathtakingly ambitious search for the answers and brilliantly unravels the complex strands of this history. Beginning with the Olympics as a sporting sideshow at the great World's Fairs of the Belle Epoque and transformation into a global media spectacular care of Hollywood and the Nazi party, The Games shows how sport and the Olympics have been a battlefield in the global Cold War, a defining moment of epic social and economic change in host cities and countries and a theatre of resistance for women and athletes of colour once excluded from the show.

Illuminated with dazzling vignettes from over a century of Olympic completion, this stunningly researched history captures the excitement of sporting brilliance and the kaleidoscopic experience of the games. It shows us how this sporting spectacle has come to reflect the world we hope to inhabit and the one we actually live in.

What listeners say about The Games

The symbolisms of the Olympics, beyond just sports

I intended to read this book just before the 2016 Rio Olympics – when it was released. I ended up reading it just before the 2018 Winter Olympics began, finishing it just in time for the opening ceremony. But it feels rather appropriate - delayed starts, races against time, and “time (as well as cost) overruns”, have become increasingly common in Olympic host cities, as highlighted by David Goldblatt in his thorough and well researched “The Games – A global history of the Olympics”.
The book is not a dry or plain recounting of various events, winners, facts and stats. Instead, this is an opinionated and well-argued history of the Olympic movement, the socio-cultural and political backdrops of the various games, the different metaphors and symbolisms that they represented at various times. The sporting greats and achievements are recounted too – but those are not Goldblatt’s only focus.
In fact, those uncomfortable with being reminded of the corruption – and poor governance, political one-upmanship, petty bureaucratic squabbles, pompous officials, heavy handed government handling of the poor and homeless who come in the way of the construction projects - will find the book too critical and not celebratory enough. Sadly, corruption and mismanagement are a reality not just at the IOC, but also at world ruling bodies for football, athletics and volleyball, among others, as a strong of high profile scandals that have come to light in recent years show. But the author’s opinions are well supported by facts, and the blending and juxtaposition of the Games themselves with the backdrops and side-stories make for an engrossing read.
He starts with a brief history of the ancient Olympics and similar events that sporadically took place over the centuries, and of Baron de Coubertin, the French aristocrat whose passion to recreate the ancient games led to birth of the IOC and the modern Olympic movement. Goldblatt sees the history of the Games as one that’s intertwined with global power dynamics. While the first few Olympics struggled find a footing (the 1900, 1904 and 1908 Games were held as an adjunct to “World Trade Fairs” in those cities) and those even in the 1920s were small affairs, Berlin 1936 changed it all. Held as a showcase of the political ideology of Nazism and to directly serve as a form of state-directed global soft power, these were the first Games to have a purpose built gargantuan stadium, multi-sports Olympic Park, a new concept called Olympic torch relay and spruced city that was prepped to be an actor on the global stage.
The war that followed, and the post War austerity days meant a return to less showy Games in the 50’s, but from the 1960s, they again served as announcements of countries’ arrival on the global stage, such as Tokyo as a futuristically modern city in 1964, Mexico as an industrialized nation in 1968 and Rome 1960 and Germany 1972 as symbols of re-emergence from the post War aftermaths. Seoul 1988 and Beijing 2008 were similar. This period also coincided with the onset of the television age, and Olympics began the journey to being the multi-billion dollar spectacles that they now are. With the desire of host cities to be as much a star of the show came skyrocketing costs on grandiose projects, and corruption that usually goes with it. Montreal set a new record for the time with the builder-government nexus, something also very evident in the construction-linked corruption scandals washing over the entire political firmament in Brazil in the run up to Rio 2016.
The book also shows how the personalities of those heading the IOC also meshed with the kind of Games that were held – from the anti-Semite Avery Brundage who fended off some American calls to boycott the Berlin games, the genteel old-boy Lord Killanin to the pompous Juan Antonio Samaranch, who treated the IOC like his personal fiefdom – and accorded himself status equivalent to a Head of State, with similar security, mandatory presidential suites and usually met with presidents, kings and heads of states wherever he travelled.
Along with that, Goldblatt also has an eye for the delightful and the quirky, not just for the greatest. Thus, while the achievements of Michael Phelps, Michael Johnson, Usain Bolt, Olga Korbut and the Indian national hockey team are highlighted, he also finds space to highlight stories of human interest. How at the 1964 Tokyo Games the Sri Lankan runner Karunananda lagged by 4 laps when the race was won, and yet continued to finish the laps to a standing applause from the crowd – a celebration of the spirit, which also won him an audience with the Emperor. Or the fan mania at the same Games for swimming champion Don Schollander, who then featured in Japan’s English teaching books. Or the coach of the US ice hockey team that beat the Soviet Union in the 1980 Winter Games and then exclaimed to the President at a White House audience that “this proves our system is better than theirs”!
Baron de Coubertin had in mind an almost austere, almost spiritual celebration of sport as a character building activity and pastime. He did not really intend his creation to become a global bureaucracy and the global norm in sport. Nor did he envisage the Olympic Games to become a place for collective delirium, or the stage for battles of race, gender, class or international relations. But that’s what they have become.

Goldblatt is special. His books are exceptional exercises in research and evidence based insight. Like the narrator here but the man himself is a natural narrator and my one wish is that he would do this job himself.