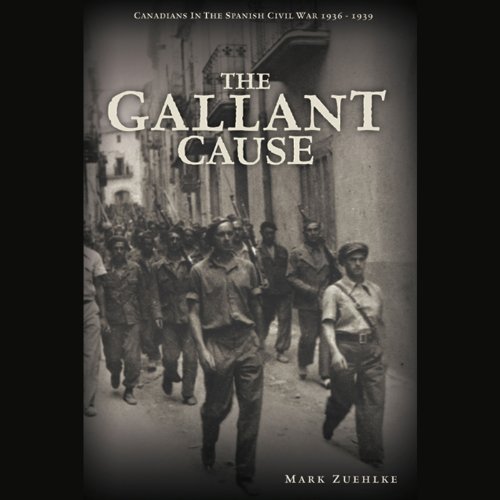 Actor Brian Holsopple’s deep, rich voice is perfectly paired with this important story about the bravery of 1,500 Canadian soldiers during the Spanish Civil War. In The Gallant Cause, author and military historian Mark Zuehlke spotlights the men who volunteered to fight alongside the Republicans; Zuehlke uses diaries and documented sources to weave an unforgettable narrative. The soldiers’ attempts to halt the spread of totalitarianism were not popular during the 1930s; many nations were siding with the fascist regimes in Germany and Italy, who supported the Spanish dictator Franco. This is a celebration of the Canadian veterans of war who joined the cause in hopes of defeating Franco’s troops.

At the outbreak of the Spanish Civil War on July 17, 1936, 42 thousand Internationals, comprised of Canadians, Americans, and Spaniards, fought together on the side of the Republicans who were trying to throw back fascist dictator General Franco’s troops, which included countless German and Italian soldiers. By October 29, 1938 though, only two thousand Internationals were able to gather for a speech requesting them to withdraw. Despite all their efforts, Spain wanted to continue on its own, hoping the war would become a Spanish affair once again.

Drawing on diaries and newly documented sources, Zuehlke offers a compelling account of the Canadian experience in Spain. It was not a popular war for Canada, with even the prime minister praising Hitler for his social and economic advances. Most world powers were aligning themselves with Italy and Germany, who supported Franco’s movement.

Along with allied troops, some 1,500 Canadians joined together in a valiant but doomed cause. This is the story of these brave Canadians, who like all veterans of war, deserve to have their story told and their experiences related, so that they will not be forgotten.

What listeners say about The Gallant Cause

A very interesting story of the war in Spain. I liked the way it included the versions of so many different people. The reader could not pronounce Norman Bethune's name.
I liked the book.

the communists are the good guys? if you buy that premise, you will like this book. it is very informative