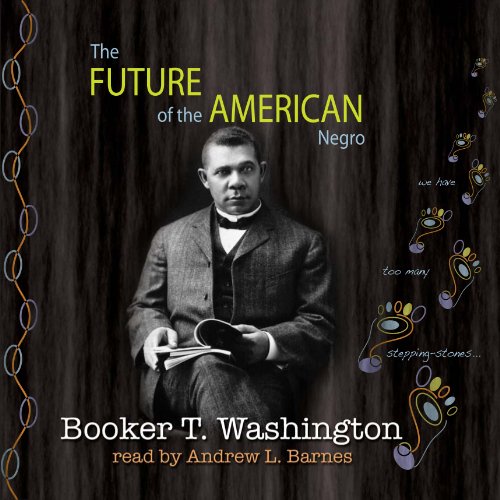 The Future of the American Negro

Booker Taliaferro Washington (1856-1915) was an African American political leader, educator, and author. He was one of the dominant figures in African American history in the United States from 1890 to1915. Born into slavery in Franklin County, Virginia, at the age of 9, he was freed and moved with his family to West Virginia, where he learned to read and write while working in manual labor jobs. He later trained as a teacher, and in 1881 was named the first leader of the Tuskegee Institute in Alabama.

The Future of the American Negro was written to put more definite and permanent form the ideas regarding the condition of the negro. Booker T. Washington, a prominent African American leader, educator, and author, articulates the importance of Industrial education. He emphasized the importance of the development of the Negro in hand and heart training, which would provide the solid foundation necessary to attain the highest form of citizenship.

This volume is the outgrowth of a series of articles written to enlighten people on the doctrine of industrial education that would address the mistakes of the reconstruction period. Booker T. Washington expresses arguments through sound reason in an impassioned plea to resolve the problems of increased crime, ignorance, discrimination, and debilitating debt crippling the black race. He substantiates his case with inspiring examples of former students of the Tuskegee Normal and Industrial Institute who overcame adversity to achieve their dreams.

Listeners will develop a greater understanding of the horrific outcomes of slavery, the colossal errors of the reconstruction period, the extreme levels of poverty and ignorance, the failures of government, and the instability of industry in the south. In the midst of these problems, Booker provides a remedy, which in many respects is still relevant to the future of the American Negro.

What listeners say about The Future of the American Negro

What a great message in this book and kudos to the narrator who made the listen enjoyable and interesting! This book contains a message from Booker T. Washington which was good then and is just as good now. Solid book and an easy five star rating.

This book is a prophetic word and I think if the black race were to use the principles laid out in Mr Washington's book, especially with regards to industrial education and moral education I think we would lift ourselves up to a better place in society. I thought that some of his solutions with regards to race relations and the disenfranchisement of blacks is naive ( I give the example of Black Wall Street) but overall the book was awesome and I enjoyed the narrator!

...which proved to be too optimistic about ending Jim Crow and getting equal voting rights for blacks in the US South. It should have been as easy as he expected, but it was not. This book is a beautiful listen.

The whole idea of opposing Booker T to Dubois has always puzzled me. They're simply 2 sides of the same coin.
In a white-dominated America the Booker T type black man was ( still is ) the only type allowed. He recognized it and tried to use his platform the elevate his people economically.
There is a genuine effort on his behalf to soften all radicals of all sides. His concerns about black men industrial training are still relevant today.

I like the clarity with which, Mr. Washington presents himself and his ideas. The things he says about the kind of education that people need versus the kind that they are getting is something that we really have going on a lot still, people are being told to get degrees for jobs that don't exist and then they have paperwork but no relevant education to be able to problem solve or practically apply their educations for work. there is obviously a lot more to this book but I always enjoy seeing the present in the past even if it reminds me that we aren't as far from some things as we like to pretend.

If you love history this is a great listen!

The reading was great and helped me imagin that I was listening to Booker T Washington. The advice was still relevant to today in some respects. This really helped me put things into a different context as in regards to the the American South at this time.

Great story and look back into time, and a good read for the re-emerging race issues that are happening in our major cities today.