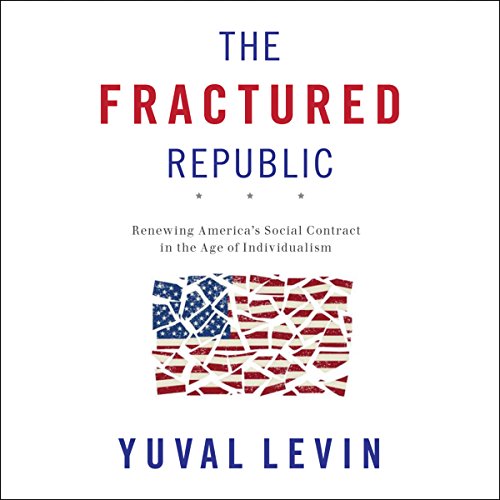 Americans today are frustrated and anxious. Our economy is sluggish and leaves workers insecure. Income inequality, cultural divisions, and political polarization increasingly pull us apart. Our governing institutions often seem paralyzed. And our politics has failed to rise to these challenges.

No wonder, then, that Americans - and the politicians who represent them - are overwhelmingly nostalgic for a better time. The left looks back to the middle of the 20th century, when unions were strong, large public programs promised to solve pressing social problems, and the movements for racial integration and sexual equality were advancing. The right looks back to the Reagan era, when deregulation and lower taxes spurred the economy, cultural traditionalism seemed resurgent, and America was confident and optimistic. Each side thinks returning to its golden age could solve America's problems.

In The Fractured Republic, Yuval Levin argues that this politics of nostalgia is failing 21st-century Americans. Both parties are blind to how America has changed over the past half century - as the large, consolidated institutions that once dominated our economy, politics, and culture have fragmented and become smaller, more diverse, and personalized. Individualism, dynamism, and liberalization have come at the cost of dwindling solidarity, cohesion, and social order. This has left us with more choices in every realm of life but less security, stability, and national unity.

Both our strengths and our weaknesses are therefore consequences of these changes. And the dysfunctions of our fragmented national life will need to be answered by the strengths of our decentralized, divers, dynamic nation.

Levin argues that this calls for a modernizing politics that avoids both radical individualism and a centralizing statism and instead revives the middle layers of society - families and communities, schools and churches, charities and associations, local governments and markets. Through them, we can achieve not a single solution to the problems of our age, but multiple and tailored answers fitted to the daunting range of challenges we face and suited to enable an American revival.

"[Yuval Levin] explains the illusory appeal of nostalgia-driven politics in the United States, the kind that Trump strokes in coarse, simplistic terms. More important, [Levin] offers a path forward for the American right after this campaign, whether it is adjusting to life in Trump's America or coping again with another electoral setback." ( Washington Post)
"Compelling... Yuval Levin has written an incisive and irenic critique of contemporary American society, together with a series of reflections that offer a way forward without trafficking in the false hope of 'solutions.' That he has done so in fewer than 250 pages of clear, well-organized prose ought to make the book famous for a generation. Maybe, in time, we can stop asking why the former days were better than these." ( Wall Street Journal)
"There are just a few essential reads if you want to understand the American social and political landscape today... Today, I'd add Yuval Levin's fantastic new book, The Fractured Republic... I learned something new on every page." (David Brooks New York Times)

What listeners say about The Fractured Republic

A strong challenge to the left/right conception of individualism and each sides sclorodic policy adgenda. narration could be better, but still a worthwhile listen.

What made the experience of listening to The Fractured Republic the most enjoyable?

Levin's diagnosis of our political and social disfunction being the result of Baby Boomer nostalgia for the exceptional post-WWII, mid-century decades and the centralized, consolidated consensus which seemed to serve as the underpinning of our collective prosperity and political comity is spot on. Despite his conservative biases, he admits to them and offers an evan-handed analysis of both sides: conservatives long for the moral consensus and social cohesion of the post-war period as well as the economic deregulation and religious right retrenchment championed by Reagan in 1981; liberals long for the corporatism, industrial policy, and social welfare programs of the New Deal days which reached their high-water mark under Johnson's Great Society in 1965. The cultural, social, corporate, and political consolidation and uniformity which allowed for both partisan platforms to exist has disintegrated. Levin argues for both sides to draw upon their historic political traditions (read Levin's previous work "The Great Debate" for an engaging primer on the early rift of Anglo-American liberalism between Burke's conservatism and Payne's progressivism for a greater fleshing out of these ideas) to navigate a new course which Levin terms subsidiarity: strengthening the mediating institutions standing between the autonomous individual and the State (families, religious congregations, civic organizations, charities, neighborhoods, local communities, etc.) which can better address the pressing social, cultural, and economic challenges and ameliorate their deleterious effects more effectively and efficiently. Levin makes the point that conservatives, though themselves beholden to their own brand of nostalgia, are closer to embracing subsidiarity than are Progressives who are increasingly enamored with Statism. Chapter 7 (in the audiobook) is my favorite section, although the entire volume is deserving of every thoughtful citizens earnest consideration.

The book outlined a great theory of where our country is heading politically. Well supported if not a little biased (something the author acknowledges right up front). The big issue was the narration. It was halting, adding pauses mid sentence which threw off comprehension of the sentence as a whole. The narrator seemed more concerned with the pronunciation of each individual word (you will hate hearing the word "diffusion" after this book) than with the concepts the book is trying to get across.

Started out strong but finished weak

The beginning of this book was good when dealing with the domination of American politics by using the lives of baby boomers as the yardstick. That part was very insightful. The drop off came when he started talking about ways to improve our dysfunctional parts of society. He basically went to the conservative well and repeated all of the traditional things we've heard for the past 40 years. He wants to limit the scope of the federal government, empower local institutions, create a market driven approach to entitlements... if you're reading this, you already know the standard conservative boilerplate.
I understand the book was mostly written before this election. The fact that Trump is the republican nominee shows the weakness of true conservatives. He also doesn't deal with the fact that the republicans are becoming the party of only white people. How can that possibly make for a winning future coalition? I'm not impressed by the second half at all.

Begins with a bang but deteriorates

The first half is informational regarding how we ended up where we are. The second half is bunch of new age libertarian ideology propaganda.