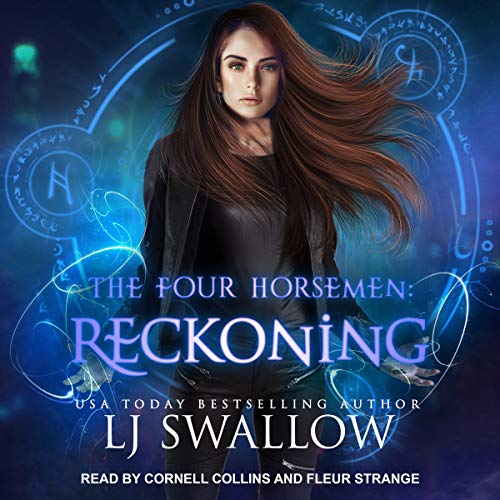 The book talks about Truth, Chaos, and Order. But what about Love?

Now the shocking truth about Vee's identity is revealed; the five are forced from to leave the UK in pursuit of the god threatening to end the world. But Chaos hasn't finished his games, yet. The countdown is on to stop the portals opening and to discover his whereabouts. The arrival of new allies sends shockwaves through the group when they discover Joss's theories are true. But with them comes new hope. And following one more stunning twist about Vee's identity, and her connection to them, the five discover their place in the world is much bigger than they realized.

In the midst of the storm swirling around them, the five grow closer as emotional barriers breakdown. Is their unshakeable bond enough to save everybody in the final battle with Chaos? Or will they be lost in their struggle to save the world?

What listeners say about The Four Horsemen: Reckoning

I have read a few reviews, And I would have to disagree with most of their comments, the story is outstanding, the development of the charactures is amazing, it is part of the story in it's entirety, the love sense are steamy though short.
The Narrator's are amazing the FMC narrator is obtuse at first but is expected from someone who hears everyone lie, the MC narrator is awesome I really enjoyed this book.