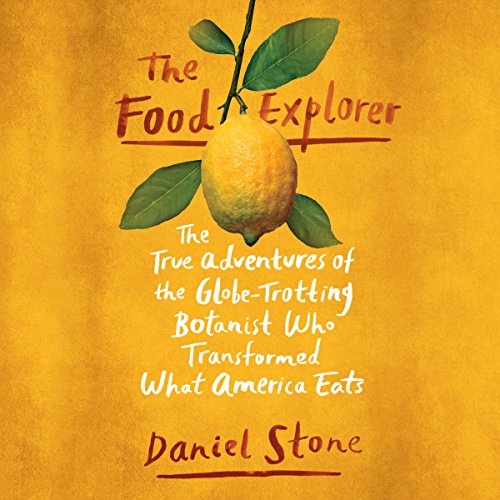 The true adventures of David Fairchild, a turn-of-the-century food explorer who traveled the globe and introduced diverse crops like avocados, mangoes, seedless grapes - and thousands more - to the American plate.

“A must-read for foodies.” (HelloGiggles)

In the 19th century, American meals were about subsistence, not enjoyment. But as a new century approached, appetites broadened, and David Fairchild, a young botanist with an insatiable lust to explore and experience the world, set out in search of foods that would enrich the American farmer and enchant the American eater.

Kale from Croatia, mangoes from India, and hops from Bavaria. Peaches from China, avocados from Chile, and pomegranates from Malta. Fairchild's finds weren't just limited to food: From Egypt he sent back a variety of cotton that revolutionized an industry, and via Japan he introduced the cherry blossom tree, forever brightening America's capital. Along the way, he was arrested, caught diseases, and bargained with island tribes. But his culinary ambition came during a formative era, and through him, America transformed into the most diverse food system ever created.

“Daniel Stone draws the reader into an intriguing, seductive world, rich with stories and surprises. The Food Explorer shows you the history and drama hidden in your fruit bowl. It’s a delicious piece of writing.” (Susan Orlean, New York Times best-selling author of The Orchid Thief and The Library Book)

“Mr. Stone is an amiable narrator who balances botany, culinary history, and travelogue with fast-paced adventure writing and a well-drawn cast of characters.” (The Wall Street Journal)

What listeners say about The Food Explorer

"The Food Explorer" is essentially a biography of David Fairchild's early career as an exploring botanist who founded the Department of Agriculture in the first half of the 1900s. Fairchild's exploits significantly contributed to the US's culinary interests in foods like kale, avocados, mangoes, and lemons, as well as Japanese cherry blossoms given to Washington, DC by the mayor of Tokyo. Some of this was quite interesting, such as how international exploration and trade suffered with the outbreak of World War I. Nevertheless, narrative structure was basically nonexistent and Daniel Stone's handling of serious social issues were extremely insensitive.

David Fairchild was able to visit so many continents in his lifetime because he was a shy, hard-working fellow who the philanthropist globe trotter Thomas Barbour Lathrop liked having along as a personal companion on his extensive luxury cruises. I loved the homosexual undertones to their relationship, and I'm glad that Lathrop's judgmental nature melted over time when Fairchild asserted himself more in the decision making on their trips. However, Stone was way too preoccupied with Fairchild's personal sensibilities and doesn't put any of the questionable things he and Lathrop did into context.

When island-hopping on a yacht, Fairchild is assigned a personal assistant (basically a servant) to wait on him wherever he goes, but it's OK because Fairchild was against slavery? What the heck? And then when Fairchild and Lathrop are in the Philippines during the Moro Rebellion, and the American military slaughters an entire village after one US soldier gets killed, Stone only says that Fairchild was upset and moved on to another island?! Stone is way too obsessed with Fairchild to properly discuss all the messed up US colonialism, elitism, and racism going on during this period of our history.

And the world didn't just have issues, but Fairchild himself as well. When his best man and pacifist entomologist friend withers away from depression in the Chinese countryside during WWI, and repeatedly reaches out to Fairchild about how miserable he is, Fairchild just sends him lists of more things for him to collect and writes something like, "I'm sure a man of your previously vigorous disposition will pull yourself together and toughen up." Stone spends only one sentence on how wrong Fairchild was in responding this way, saying something like, "It's so interesting how people back then didn't understand depression." The way Stone mentions wrongdoing off-hand like this is so shallow.

Don't even get me STARTED on how Stone confesses in the epilogue that he stole cherry blossom buds from a traditional tree in Okinawa! He wanted to "feel the rush" Fairchild must've felt when taking plants from other countries, so Stone circles the garden until the tree is left unattended, then sneaks by and cuts off 3 buds with scissors he brought with him. Then the narrative professes that somehow this is OK because Stone isn't a professional botanist, and the buds die after he tried to care for them in his kitchen back in the States. But he still keeps the dead buds on his table as "inspiration"? Seriously, what the f**k?!

Either make the book all about the food Fairchild found, or actually RESPECT all the messed up s**t that he was involved in during his life.

I'm not sure who I would recommend this to. Maybe extreme foodies who really want to know where certain American favorites came from? The colonialism and elitism are just so distracting in this BECAUSE the author simply doesn't address these facets of Fairchild's life. Basically, this book was a lesson on how NOT to write about issues like invasive species introduction and stealing culinary property from sovereign nations.

I enjoyed the book, but would have liked more detail about Fairchild's life and education. Also wanted to hear about how what he collected was propagated, maintained, and distributed by the USDA as well as how he got farmers and consumers to adopt them.

slow to start but fascinating

I've often wondered about the variety of food we eat, where it came from, what's the healthiest, are there more that we don't have here in the US? This gives.me a better idea of all those things. Yep, there's more, quinoa and kale are the healthiest, and it was brought here by a persistent scientist and explorer Fairchild. The book was slow to start for me; too much psychology and history of the benefactor Lathrop, and it seemed to jump around a bit, but by the end of Part II, it became more interesting. Definitely worth persevering.

No No Narration on a Yes Yes Book

Beautifully written and comprehensively researched, I was so looking forward to this book. Sadly, the author chose to read his own book and he is not a voice talent in any way. The narration to what should be an entertaining and intriguing book about food in the USA sadly sounds like a talented high school kid trying out for the school play. Advice to authors: talented authorship has nothing to do with voice work. Just don’t do it.

A nice wide-ranging story, that needed an editor

The information and stories about David Fairchild, his exploration, work, and life were detailed and interesting. To me, a plant and botany lover who has travelled a fair bit and knew many of the places and plants he cited, it offered a good historical perspective.

Frequently though, the author's writing, and his reading, were irritatingly weak. From paragraphs that were breathlessly all over the place or grammatically ambiguous, to others in which the author didn't read his own words as well as one would expect —eg, referring to 'renumerative' [sic] work. Both his writing and reading could've benefited from the help of a good editor/reviewer.

Those are my views of the book and author's major plusses and minuses. But there was also an unexamined statist undercurrent with respect to the putative benevolence, and necessity of Government with respect to agriculture and science, that I found disheartening and disconcerting. Perhaps Fairchild was a statist working for the government —that would hardly surprise; but the attitude with which the author related the myriad coercions by individuals in government felt like an implicit and uncritical recitation and acceptance of statist doctrine.

All in all a good book. With a good editor/reviewer, it might've been a very good one.

What an unexpected treat! Our book club chose this book and I thought it would be boring. But surprisingly it is packed full of interesting information on numerous facts. Great surprise.

A Must Read for Foodies

Did you ever wonder where all the culinary delights came from? They all came from one guy, David Fairchild. It turns out he's my greatest hero that I didn't know about. I also didn't know that you could have so much fun running around the earth looking for new plants. What a great way to make a living and what great adventures.

I enjoyed this book so much that I almost shed a tear when it ended. As we drove around Puerto Rico contemplating a farm of our own this was the perfect tale to inspire us. David Fairchild had an amazing life, And this book would have made him proud.

This is a neat look at American history from a unique perspective. I would recommend to history buffs or foodies alike

A thrilling story of a great explorer. spiced with fascinating tidbits and stories. highly recommended.