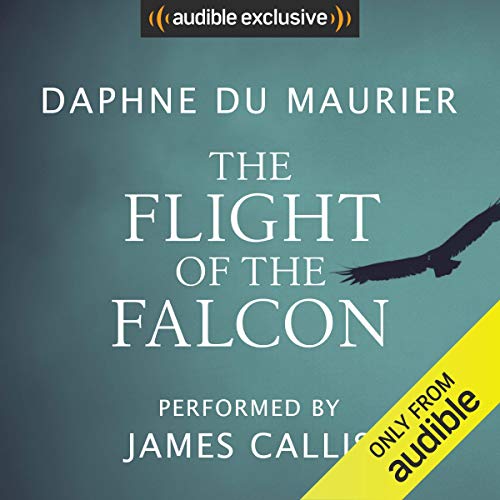 The Flight of the Falcon

The Flight of the Falcon

From the best-selling author of Rebecca comes this Audible Exclusive of Daphne du Maurier’s The Falcon. Narrated by James Callis, this menacing and dark story explores how a violent past can affect the present.

Armino Fabbio is a simple Italian courier until an old woman is murdered. He discovers that the woman was his family’s servant a long time ago and returns to his family home in Ruffano to investigate. However, his return home isn’t a happy one as he discovers that his birthplace is haunted by the ghost of his brother. The spectre of a sinister Duke, otherwise known as ‘The Falcon’ also resides in the house. But as dark family secrets and history begin to resurface, how will a small-time businessman cope, and what will he learn?

Daphne du Maurier (1907-1989) was a British writer whose work is still greatly appreciated to this day. Her novel Rebecca is probably her most famous piece of literature, but she also had substantial success with her short stories. Her popularity and prowess are evident by the fact that Alfred Hitchcock chose to adapt both Rebecca as well as her short story ‘The Birds’ into feature films.

James Callis is British actor and writer known for his roles in the Bridget Jones films and in the American TV series, Battlestar Galactica.

"[T]our guide Armino Fabbio has returned to his childhood home, now alcoholic and homeless, after the murder of an old family servant. There he finds his brother Aldo, supposedly killed during the war; Aldo in turn believed Armino and their mother had also been killed. Aldo, insane and vicious, undertakes a play about the founder of Ruffano, Duke Claudio, against a backdrop of political unrest and town and gown conflicts. It is a dark, harsh tale of good and evil, with family secrets unearthed amidst incest, murder, rape...this is not light listening. James Callis's reading is very good, with fine pacing and easily distinguishable voices." (Library Journal)

What listeners say about The Flight of the Falcon

a trip to Italy

Absolutely wonderful! like taking a trip to Italy
and living the story, The narrator made it deliciously Italian with hypnotic descriptions of the places and the characters. I loved it . twisted family secrets, unraveled with a grand finale.

Before I bought this product, I knew nothing about it save that it was written by Daphne Du Maurier, read by James Callis and set in Italy. This is uncharacteristically impulsive of me but I was rewarded with a fantastic, yet heartwarming, thriller.

For most of the book, I was convinced I knew the correct solution, only to have it exploded in the final few minutes. I have recently read Gone Girl and I would say that this book is far more gripping.

Beautiful writing and a gripping story

Du Maurier’s story writing craft and skill is superb. I was gripped from start to finish, entranced by the description and convinced by the characterisation. The performance of the narrator. I only wish I had the pleasure of discovering this novel again!

A dire, dated and laboured story of unconvincing melodrama. Dreadful narration which managed to be breakneck and boring at the same time. Wish I had not bothered.

I really enjoyed this, as I've done with most of the author's books. I listened to it over a few days decorating my son's room and it made the time go in very enjoyable. I was a bit miffed at the ending though!

I first read the book in the 1980s. This audiobook is one of the best I have listened too. It made me feel as though I was really in Italy. The narrator was brilliant. I loved the story and have listened to the book twice now.

Not my favourite read

Some dated and quite unpleasant scenes and attitudes, and plot far-fetched. I listened as it's set in fictionalised Urbino (Rufano) as I planned to visit.

Another masterpiece by Daphne! Many plot twist and turns and a story that is unique and unmatched.

The least engaging of du Maurier's tales I've read. Not helped by the poor acting. Most of the audio books have excellent actors reading but this one is dire. Rushing through as if he's bored, trying to "act" but all very wooden and cringeworthy. Waste of money!!