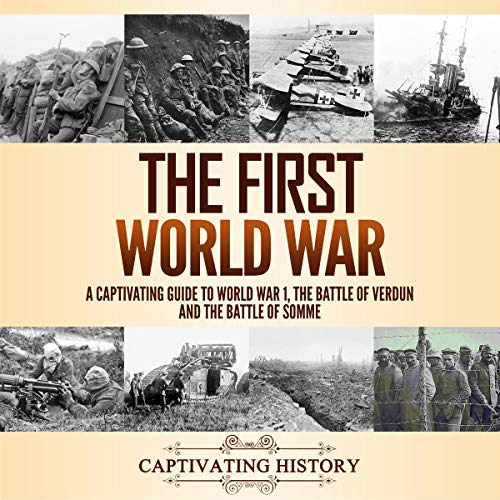 If you want to discover captivating stories of people and events of World War 1, then pay attention...

Three captivating manuscripts in one audiobook:

Some of the topics covered in part 2 of this audiobook include:

Some of the topics covered in part 3 of this audiobook include:

So if you want to learn more about the First World War, scroll up and click the "Add to Cart" button!

No, Gavrilo Princip was NOT lynched!

He was sentenced to 20 yrs of prison, and died from tuberculosis.
I'm astonished how such an easily-checked fact can appear erroneously in this book!
(The book claims that Princip was lynched)
If such a basic fact is wrong, and in the beginning, how can I trust the rest?

Combines the best of history books---top-quality content and highly informative. I'll be using it in the classroom.

Very fine exposition, the meticulous selection of material leaving the non-expert listener with neither too much nor too little;

An excellent one-volume history of a very important point in our history. I recommend this book.

Good book, but the listener should know something about the war before reading it. Not exactly for the casual history lover.

This program spent a lot of time about the parts of the war that have been ignored by most authors. Extremely well done in my opinion.

Superlatives can't describe how excellent this book is. In my opinion the best single-volume history of the Great War. I think a close second would be captivating history's First World War.

A Must Have Book

This should be a must-read for high school students. The book leaves out somethings that the video set discusses and points out. Truly a must-have to understanding the Balkans, Middle East, and today's modern world.

This is a top-notch overview of the first World War. It touches the political, economic, social and military aspects of World War One without becoming bogged down. It arrives at its conclusions quickly and cleanly.

I highly recommend this book especially if you are looking for a concise, complete history along with an insightful placement of events into surrounding histories. The breadth, impact, and lessons from this war are sad and astonishing.

Another excellent book by this author. This book is especially interesting because it not only covers the Western Front, with which most readers are probably familiar but also all of the other campaigns, especially in the East, which is little known today.

This book is an easy history read as an introduction to WWI. It is hard to realize that the pure exhaustion of the combatants, both materially and emotionally brought this war to an end. WWI was the ultimate waste of human life to that time in history and continues to take its toll on mankind today. Great read.

This author is good

As always, I was much impressed by how the author handled the complex sequence of events in the short compass of a book not intended to be a complete day to day, mini-battle to a mini-battle, detailed accounting of events.

It also details how the punishment meted out to the losers lead to resentment and to the Second World War. While it does provide some civilian overview, especially for Russia, it leaves much of the civilian details out.

Book provides a detailed history of WW I. It includes the pre-war power struggles and political intrigue that lead to the start of the war and the political changes in the governments after the war.

This book is more heavily focused on the military side of the war than the diplomatic, economic, or domestic politics. It makes an excellent addition to a fuller exploration of the war, its causes, and its long-term impact.

It has as much to do with politics, public behavior, religion, Kings, and Presidents as it has to do with soldiers. The author really outshines himself with this book..by all means, it is enjoyable, amazing history.

You will not find a much better narrative- a chronicle - on the First World War. If you are a history buff, grab this. It is not so much a war book.

This provided a solid understanding of The Great War's causes and how it changed the face of warfare, politics, and the direction of history.