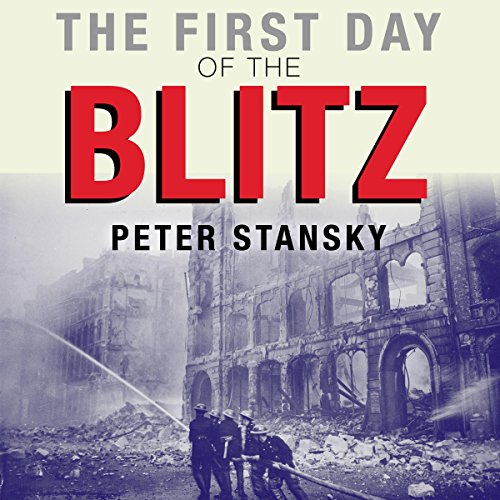 On September 7, 1940, the long-feared and anticipated attack by the German Luftwaffe plunged London into a cauldron of fire and devastation. This compelling audiobook recreates that day in all its horror, using rich archival sources and first-hand accounts, many never before published. Eminent historian Peter Stansky weaves together the stories of people who recorded their experiences of the opening hours of the Blitz. Then, exploring more deeply, the author examines what that critical day meant to the nation at the time, and what it came to mean in following years.

Much of the future of Britain was determined in the first twelve hours of bombing, Stansky contends. The Blitz set in motion a range of responses that contributed to ultimate victory over Germany and to a transformation of British society. The wave of terror, though designed to quash morale, instead inspired stoicism, courage, and a new camaraderie. The tragic London bombing can reveal much of relevance to our own violent times, Stansky concludes: both the effectiveness of modern terror and its ultimate failure are made powerfully clear by the events of September 7, 1940.

The book is published by Yale University Press.

"Stansky makes well-judged use of eyewitness accounts to highlight the reality behind the myth." (The Sunday Times)

“A vivid account of how Londoners withstood attack. Recent events have shown how that resilient spirit lives into our own day." (Literary Review)

"There is no shortage of books about the Blitz, but Peter Stansky's is up there with the best." (Time Out)

What listeners say about The First Day of the Blitz: September 7, 1940