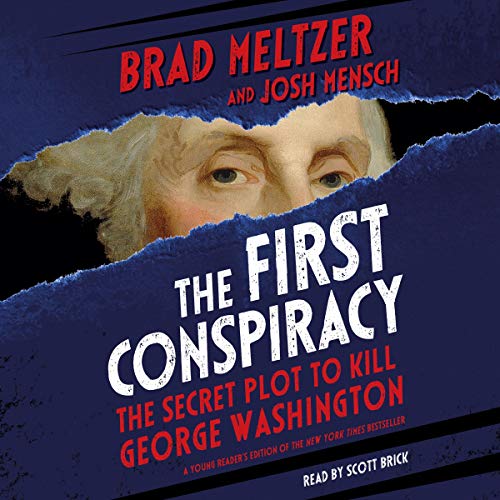 "[Narrator Scott Brick]...makes the pages come alive. He varies his volume during dramatic moments, at times almost whispering. He also varies his tone, enhancing the drama but never overpowering it.... This work is an excellent example of the perfect melding of text and narrator." (AudioFile Magazine on The First Conspiracy, Earphones Award Winner)

1776.
The early days of the Revolutionary War.

It supposedly began with Thomas Hickey, a private in the Continental Army, and New York governor William Tryon. In an astonishing power grab, they plotted to kill Hickey's boss: a man by the name of George Washington.

In the end, Hickey was caught, brought to trial, and found guilty. It would seem he became the first person in the new nation to be executed for treason.

But to this day, nobody knows for sure if this story is true. In The First Conspiracy, Brad Meltzer sheds light on the close-kept secrets and compelling details surrounding this story and exposes the history of how the assassination plot catalyzed the creation of the CIA and FBI.

This fascinating investigation offers young listeners an in-depth look at the facts and remaining questions that surround this contested historical event.

What listeners say about The First Conspiracy (Young Reader's Edition)

history lesson. So timely to reconnect with the vision and heroic efforts taken to birth the U.S.