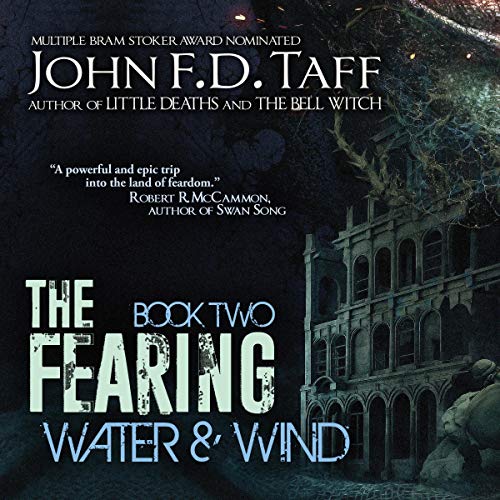 John F.D. Taff's epic apocalypse of terror, The Fearing, continues in the second book. A group of battle-worn seniors pick up the pieces of their ravaged lives and grapple with survival after the end of the world. And for the first time, they begin to notice an ominous pattern in the deluge of fears now roaming the earth.

Teenagers Kyle, Sarah, and Carli sift through the devastation of their lost lives to find anything resembling hope for a future. But when Carli goes missing, the stakes get higher as the search for her takes a diabolical turn.

And the enigmatic Adam retains his tight-fisted grip on his submissive minion Jelnik as a series of unspeakable horrors follow in their wake when the two men travel west toward their dark destiny.

“The Fearing isn’t only John F.D. Taff’s best book to date, it’s the kind you put on the shelf reserved for the ones that really did something to you, emotionally, intellectually, physically. A modern master at play.” (Josh Malerman, Bram Stoker Award-nominated author of The New York Times best-selling Bird Box)

“John F. D. Taff has rapidly become one of my favorite writers in the horror genre. His horror is grounded in our day-to-day lives, in our families, our work, our most private thoughts. His stories vibrate with emotion and life and his prose is cathartic, deeply satisfying, like popping the bubbles in bubble wrap.” (Ray Garton, grand master of horror and author of Live Girls and Ravenous)

What listeners say about The Fearing: Book Two

Good Continuation of Fire and Rain

This story picks up exactly where the last one left off and is pedal to the metal. Needless to say, these are not standalone books and are a cut-up story that you have to listen to in order. The only issue I had is that as the first book really setup the environment and had a lot of action, this just continues it along. This seemed to be the lull between the buildup and the climax, still great action, but not as impressive as the first book.

I really like where this story is going. I like the premise of the horrors everyone comes across and am desperate to know what is going on with Adam. My favorites are still Kyle, Sarah, and Carli, although this book really shakes up that dynamic. The writing is the same as the first book where the different characters are in different groups and don’t interact with each other. We even get some new members.

Linda Jones did a great job narrating. I continue to love her different character voices and emotion she put in to each. Jones definitely portrays the characters as I expect them to sound like.

Being the second part of a multi (I read 4) part epic it's a given that this was going to take the characters from the first one, raise the stakes, introduce a few others, solidify the characters and their motivations, and probably bring some of them together. It did all that in a wonderful 4 hour burst of story telling. Theories about the world were discussed and the groups basically came to a shared conclusion about what's going on and how it relates to the name of the series. And some of the groups start to accumulate together, as one mentioned in the story it felt like they were being herded or led. And the new characters are interesting as well as two individuals from very different circumstances find eachother in the wreckage of the world and start trying to keep themselves alive like the others, but there's something off about one of them so it leaves open the possibility of where that'll go in the end.

And of course there's plenty of action and creepiness with some pretty horrifying and affecting scenes. The author in tandem with the narrator do a solid job of bringing some things to life that probably shouldn't have been, and it's pretty awesome to behold.

I received the review code for this audiobook at my request and have voluntarily left this honest review.

I am loving this series. My only complaint is that I can’t read all of them back to back. This book advanced the development of many of the characters and further solidifies that Adam is going to to be an evil man. I can’t wait to see how his character develops by the end of the story. There is much more than meets the eyes with him. Book two really advances the dire circumstances of the world and its characters and how they are diving further and further into madness as the apocalyptic events progress.

Keep ‘em coming John F. D. Taff. While I got the audio for free for a review I have purchased both books and am waiting to get the next two. You should buy these books too. You will not regret it. Love this series.

I’ve listened so far to both the first two in this series and I really like it so far. The action starts right off with bang in very beginning and is nonstop throughout. The only thing I didn’t like is how short they are and each end with cliffhanger which drives me crazy if I’m not able to start the next one right away. But other than that no complaints for apocalyptic story it’s rather good and I’ve listened to a lot of them for comparison. I would definitely recommend it. I was given this audiobook for free in exchange for voluntary and honest review.

Excellent continuation of book one!

After listening to book one of the series "fire and rain" I was so excited to get the chance to listen to book two! This was an excellent continuation of the story.

We follow our characters on this terrifying ride of survival, all the while trying to figure out what even happened in the place. I am enjoying these books! The ideas are wonderfully different. Is it appcolypic? Is it the rapture? No one is sure what is happening, only one man seems to know, but he's not giving much away. He seems to have a secret mission he's on. Everyone else left are just trying to survive.

This one ended on another cliff hanger ugh!! Can't wait to get the next one to continue on!!

Narration is excellent! Easily kept me engaged with the story. Five stars over all!

The fear is spreading.

Water and Wind picks up where Fire and Rain left off, continuing the incredible tales of our handful of survivors as they struggle to make their way in a world where their most dreaded fears are all coming true. Excellent characters, great pacing, intense situations, and an excellent story will keep you reading/listening from start to finish. Linda Jones once again delivers an incredible performance, bringing the characters and world to life. I was given a free review copy of this audiobook at my request and have voluntarily left this review.

Book Two sees the introduction of a new character; Reverend Mark. And with him comes one of the creepiest scenes in the story so far, involving a young boy named Dom. I won’t say anything about what happens but it proves the author can do small, fear-inducing, character-driven horror as well as the big imaginative set pieces that launched the narrative in book one.

The mystery of what’s happened to the world starts to become clearer. Adam is a vessel for all the world’s fears and the vessel is full. It has spilled out into the world.
Mark meets a girl. Monday. She’s going to be important.

If you’re reading this review I’m assuming you’ve read book one and are wondering if you should continue. Continue fellow reader, continue. Even if it’s just to get angry at Carli, the traitorous little bi-…
Great narration from Linda again.

Obligatory reviewer disclaimer - I was given this free review copy audiobook at my request and have voluntarily left this review.