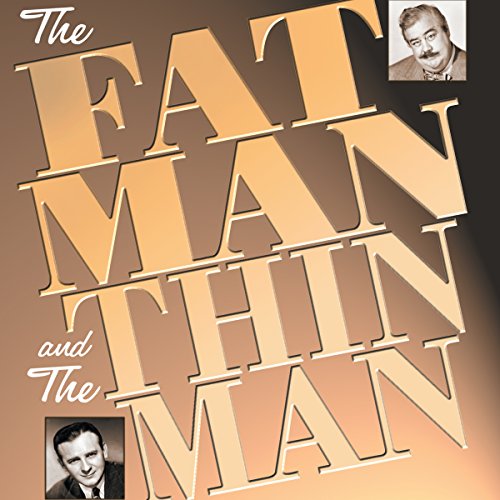 The Fat Man and the Thin Man

J. Scott Smart stars as "The Fat Man", Brad Runyon, the stout-but-stalwart investigator who was first conceived as an arch villain in Hammett's classic novel The Maltese Falcon. Charismatic and captivating, Runyon has a way with the ladies, in spite of his 237 pounds. Nick Charles, "The Thin Man", was played on radio by William Powell, Les Damon and Les Tremayne. Cases seem to fall in to Nick's lap...often dropped there by his wife, Nora (played by Myrna Loy and Claudia Morgan). This sophisticated married couple share as many laughs as thrills in this highly enjoyable show. This four-hour collection includes 7 digitally restored and remastered broadcasts.

What listeners say about The Fat Man and the Thin Man

It is hard to write a review of this...

It’s difficult to say whether these recordings were good or bad. At first I enjoyed hearing entertainment in a time when radio was still a huge part of comedy and theater. And comparing it today with the “brought to you by....” along with other things that haven’t changed. However I did not make it all the way through because the clapping and Orchestra we’re a little disrupting to the flow of the shows. But that is coming from someone not born in a generation for whom these broadcasts were great entertainment that the whole family would sit and listen to and enjoy being the audience along with the live audience and the other actors present during the show. I’m sure this is incredibly nostalgic for some people and in someways very educational for me. In the end though I am returning it as it just never hit the sweet spot. That is why I’m giving it three stars, simply because it is what it is, nothing great and nothing bad.