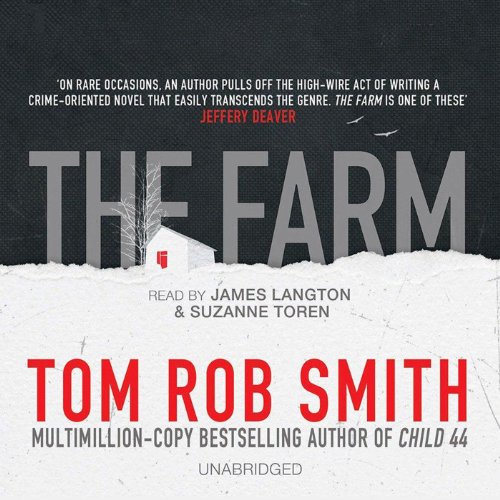 If you refuse to believe me, I will no longer consider you my son...

Daniel believed that his parents were enjoying a peaceful retirement on a remote farm in Sweden, the country of his mother's birth. But with a single phone call, everything changes.

Your mother... she's not well, his father tells him. She's been imagining things - terrible, terrible things. In fact, she has been committed to a mental hospital.

Before Daniel can board a plane to Sweden, his mother calls: Everything that man has told you is a lie. I'm not mad... I need the police... Meet me at Heathrow.

Daniel is immediately caught between his parents - whom to believe, whom to trust? He becomes his mother's unwilling judge and jury. Presented with a horrific crime, a conspiracy that implicates his own father, Daniel must examine the evidence and decide for himself: Who is telling the truth? And he has secrets of his own that for too long he has kept hidden...

What listeners say about The Farm

oh my god. couldn't finish this one.
The mother tries to convince her son that she is not crazy, by talking for hours on hours about a picnic and potato salad.
after 4 hours with this book, i must say that she is crazy, and so am i if i wont tern it off.

I'm only half-way through and I'm totally gripped by this novel! It's suspenseful and intelligent, and if it continues like this it will be one of my favourite audiobooks. The performances are brilliant too. Got to get back to it!

This book is set partly in London, but the mystery unfolds in a remote rural location in Sweden. It is a very absorbing listen, a two handed narration with many unexpected twists. The descriptive writing is skilful, creating a claustrophobic and uneasy backdrop to the narrative. The characters are distinctive and the plot is clever - it is rarely clear what is real and what imagined.
The voices are excellent and believable, - a really important factor in a book about credibility and doubt.

Where does The Farm rank among all the audiobooks you’ve listened to so far?

The story was simple, but the way it was told was really captivating, one of the best this year

Right from the start not knowing who to trust had me instantly drawn in and captivated, needing to read more to confirm or dismiss my own reasonings and assumptions.

Have you listened to any of James Langton and Suzanne Toren ’s other performances? How does this one compare?

My first experience, but will seek out more. Not normally a fan of multiple narrators, but it did work well.

The beginning kicks of nicly and sets the tone, the book simply builds from there.

Enjoyable, but seemed to lack something.

I enjoyed this book, but not as much as I was expecting. It felt as if it was leading somewhere that it simply didn't reach unfortunately. I can't think of anything specific to criticize it other than the fact I felt baffled by some of the character motivations and their actions in places, although this is perhaps explained a little as the story develops... I'm not sure and I'm being a little too abstract.

Overall, a good story and a pleasant read, but nothing exceptional

I've read all Tom Rob Smith,s other books and have found them atmospheric, intriguing, fast paced and involving. This is awful, in fact I don't really know how I got through it. The bulk of the book is a monologue by a woman clearly suffering from paranoia, who is a very, very annoying character, read in a very annoying manner, possibly on purpose. The main problem is that this is a very simple story, which moves at a snails pace and has one, minor, twist at the end. A complete waste of time.

Yes, it was worth listening to. It had a nice pace and some good suspense,

I wouldn't have changed the story because it was fairly enjoyable anyway, but I had expected it to be even better as it was recommended to me by a friend who raved about it. Maybe I would have enjoyed it more without inflated expectations?

Which character – as performed by James Langton and Suzanne Toren – was your favourite?

The character of the adopted daughter was very well written. I could see her very clearly.

Do you think The Farm needs a follow-up book? Why or why not?

I can think of a few ways it could go forward to another book, so yes, and I would probably buy it too.

As an avid crime reader, I was looking forward to a gripping read, especially due to the pre-publishing blurb, eg; "Chilling, hypnotic and thoroughly compelling. You will not read a better thriller this year" or "Another first-class, must-read crime novel". This was in no way a crime novel, nor was it chilling, hypnotic or compelling! I am usually not one to write bad reviews on things, but after just finishing this book, which is anticlimactic and goes out with what one could only describe as a whimper, I had to write my thoughts. If you are expecting a crime novel - this isn't one. The most part of the book is taken up with the main character Tilde's recounting her 'evidence' of 'crimes' to her son. This evidence (a long and convoluted airy fairy rant) did not make you empathetic to Tilde's situation. Apparently the book's point is to have you guessing throughout whether she was telling the truth .... or not. Without wanting to give the plot away to anyone else who wants to read the book, I did not find her 'evidence' interesting or in anyway proving that something sinister was going on.

Also, I didn't actually LIKE any of the characters in the book ... not one of them! Therefore I could not empathise one way or the other with anyone. In the end, I couldn't care less whether Tilde was losing her mind or not, sadly.

The book is also quite long and I felt completely cheated by the ending - it was wishy-washy to say the least and did not resolve any of the issues that the book was about. Probably the most disappointing book I have listened to from audible so far. I can't say who would enjoy it. I did not.

What could Tom Rob Smith have done to make this a more enjoyable book for you?

To resolve whether the main character was losing her mind ... or not. Whether crimes HAD been committed ..... or not. Everything was left dangling and very unsatisfactory.

Would you be willing to try another one of James Langton and Suzanne Toren ’s performances?

No. The male reader was terrible! Literally sounding like he was 'reading out of a book' I know that sound a bit facetious, but if you compare his reading to the way, say, Sean Barrett or Hugh Lee 'dramatises' their readings there is absolutely no comparison. The female reader was OK, but often sounded like she was reading out a child's story book to a child at bedtime.

Not really. I feel a bit cheated spending x amount of hours on such an unfulfilling read.

Only that the brilliant publicity for this title gave me a very different expectation from what I actually 'read'.

A wonderful, complex, story that unfolds slowly. Tom Rob Smith turns his story-telling from state to individual and it's wonderful.

Fabulous story brought expertly to life. Gripping from the start and right through. Loved it.