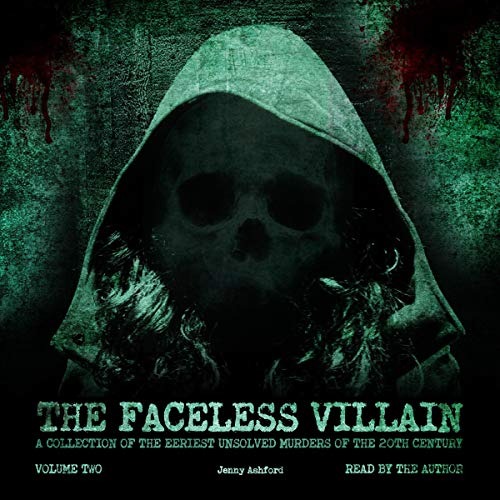 The Faceless Villain: A Collection of the Eeriest Unsolved Murders of the 20th Century: Volume Two

What is it about these unsolved murders that still fascinates us long after the cases have gone cold? Is it simply that we enjoy being able to come up with our own theories about what happened to the unfortunate victims? Or are we intrigued by the terrifying possibility that the killers are still out there somewhere?

The Faceless Villain: Volume Two is the second in a three-volume series that explores the most mysterious and disturbing unsolved murders of the 20th century. This volume is comprised of the years 1960 through 1979, and includes all of the best known cases of the period, as well as many more lesser-known murders, all presented in a compelling chronological narrative that takes the reader on a grisly journey through the blood-soaked avenues of mid-20th century crime.

What listeners say about The Faceless Villain: A Collection of the Eeriest Unsolved Murders of the 20th Century: Volume Two

Jenny Ashford is a great researcher and writer. Fans of her fiction or "13 O'Clock" will enjoy this one. All at once listening to this book seems like a cross between a "true crime" expose, stories being told around a campfire or a chat with a friend.

This second volume in the anthology is as informative as it is unnerving. The substantial increase in unsolved cases of this time period highlights more an increase in historical data than it does an increase in crime or violence. Like the first volume this edition flows very quickly. You will need a greater attention span then for that of a Dan Brown novel but, it's packaged in fascinating digestible chunks. If you listened to the first volume sound quality and narration are noticeably improved.

Well worth all 17 hours!

The reason I read true crime stories, I now realize, is for the release and sense of restored balance that comes with the eventual capture of the perpetrator. Listening to this endless list of horrible murders provides no such revelation, only the sense that there are untold numbers of sick, sadistic creeps out there. How have I lived this long without encountering some misogynistic psycho? Quit with only 30 more pointless, depressing minutes to go. I’ve had enough.

Book itself was good with plenty of intriguing cases and good information. However, the author is the one reading and she is not good. She sounds robotic and idk, something about her monotone and inflection-less narration kind of makes the subject matter less interesting and harder to stay focused on. Excellent writer...but get a different narrator.

Pretty sure author doesn’t have a future in narration

To anyone who reads this- if you find the author/narrator’s voice insufferably fast, give it a try on .75 speed; still annoying but tolerable enough to finish the book.

Peace, love, and an astounding amount of murder.

This book did nothing to curtail my paranoia that any stranger I pass could be a murderer.

It's a pretty stunning record of how murder investigations have changed over the years. With the advances in dna technology pretty soon you won't be able to write a book like this.

Made the last 3 days at work fly by.

WOW! Dont listen to it alone!

Thank you so much....Well done! You rocked it! Please dont stop. Makes my commute so much better!

The narrator spoke to fast, inflected strangely on words and the whole thing flowed as one run on sentance. It was one case to the next to the next with small transitions you could miss. Not impressed.

The narrator seems to be in a hurry. Monotonous voice is just irritating. Next time, why not hire a professional narrator?

This book is essential if you're into Unsolved Crimes, or even crime in general.
Clearly, the book has been researched,planned and written extremely well.

This is certainly a book where 5/5 looks as though it is under rating It.

I look forward to Volume 3.

A great mix of well known and some more obscure cases. The author's podcast '13 O'clock' is a great companion to this work.