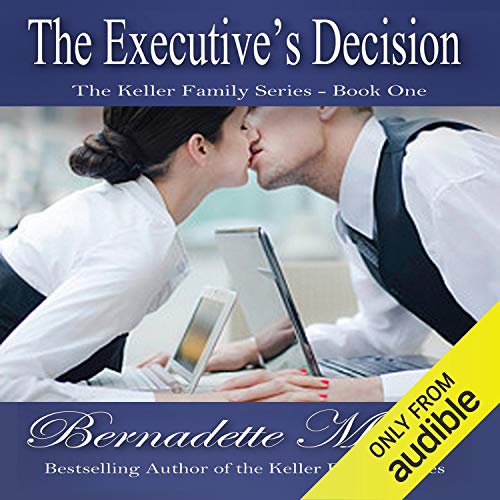 Regan Keller fell in love with a wealthy and powerful man once. He was her boss. When that turbulent relationship ended, she swore she'd never again date someone she worked with. That was before she literally fell into her new boss's lap.

Zachary Benson is the head of a successful empire and used to getting what he wants in the boardroom and outside of it - and what he wants is Regan Keller. He's determined to convince Regan that even though he's her boss, they can share a life together.

However, when Regan's past threatens to destroy the architectural firm Zach has invested his entire career in, he has to make an executive decision whether to choose his business or fight for the woman he loves.

What listeners say about The Executive's Decision

Fun story that moves along at good pace.

How a woman faced with the dilemma of possibly repeating a life mistake finally figures out what her next move should be.

Excellent narration really brings this story to life. Her clarity makes it easy for even older ears like mine to easily understand the words and she adds the right amount of emotion to bring the characters to life. Great job by Gale Cruz who is obviously a gifted narrator. I'd like to hear that contralto voice in the music industry.

What if your biggest mistake led also your greatest success?

I may listen to this story again after my wife is done hearing it.

Romance happens when you least expect it!

Where does The Executive's Decision rank among all the audiobooks you’ve listened to so far?

My first audio book and I loved it!

A fun and romantic story and Gale Cruz is a gifted narrator. Loved all the passion and humor intertwined with family dynamics. This book may have hooked me on audio!

What did you love best about The Executive's Decision?

I spend many hours in the car, and audio books can make the ride bearable. This one had a really good story line, and I thought the narrator did a wonderful job of making the characters come alive. The story, and the narrator, both held my interest and actually made me reluctant to get out of the car, even after 2 1/2 hours in traffic! I couldn't wait to hear the rest.

I'm going to look for more works from this author, and more audio books from this narrator. A great combination!

If you could sum up The Executive's Decision in three words, what would they be?

Even though it was predictable, it was well written.

Would you listen to another book narrated by Gale Cruz?

Gale Cruz, while having a wonderful voice, doesn't have many "characters". Don't let this stop you. She reads very well. It's just sometimes a tiny bit confusing wondering whose talking. She does not change pitch when a male is talking. (I'm not sure that I would change that)

Good but not great start to the series...

This was a good story. I liked Zach and I liked Regan most of the time but she had her moments. The story was enjoyable but pretty much what I expected. This is the first story I've read by this author and based off this I may consider trying more of her work in the future.

Regan is a nice woman that ran into some trouble and is just recovering from it. She works as an administrative assistant but in her last job, she was sucked in by her boss, a handsome and powerful man who abused her, lied to her and then almost killed her. Regan recovered and is ready to move on with her life, including starting a new job.

Zach is a good guy and runs his family's business as best as he can and since he's a smart guy he does pretty well at it. His mother has tried to set him up with women but they're never the right one so he puts them off and concentrates on his work.

Regan is on her way to her first day of work and already things aren't going well. Her car broke down so she had to grab a bus and it rained and she didn't have an umbrella. She ends up on the bus, soaked and having to stand because it's so crowded. A bump ends her up in the lap of a very handsome man. Regan is rather freaked by this and tries to get up but without success. The man (Zach) tries to put her at ease and convinces her to finish the ride where she is. When he finds out where she's going to be working he invites her to lunch at a hot dog cart outside her building and she surprises herself by accepting. You have to understand that because of the trauma she went through with the last man she was involved with she has some rather irrational fears running through her head and is constantly having to tell herself she's being paranoid and can move on with her life. So when she accepts the lunch date she surprises herself and doesn't know if she'll actually go. Her new boss doesn't show up that morning and Regan gets trained by the lady she's replacing. She decides to go to lunch and they have a very nice lunch...the problem is that she still doesn't know his name. When she gets back from lunch and finds out her lunch date is her boss she freaks and almost quits right there. Zach convinces her to stay but Regan is very adamant that they can be nothing more than business associates.

Zach isn't too thrilled to be relegated to just a boss and he has trouble pushing thoughts of Regan out of his mind. He wants to explore more with her and tries to figure out how to get her to accept something more. The problem is that since he doesn't know about her past he doesn't realized just what he's working with or how hard it'll be to get her to accept him. They work together well, even when they're keeping things strictly business but it's obvious that they both feel an attraction to each other. Zach is frustrated by the fact that Regan won't consider giving him a chance and Regan is letting her fear ride her and tries to keep Zach at arms length. Obviously, Zach breaks through to Regan eventually but it's a constant struggle for him to gain ground with Regan because of her past. Regan isn't very open about her past and gives Zach the bare essentials but holds back the rest thinking he won't accept her if her knew. Zach tries to be patient with her because he loves her and doesn't want to chase her off but it's hard for him. Things escalate between them and Regan starts to come around to seeing a future with Zach but there is some drama before the end as Regan's Ex comes back into her life (briefly) and Regan takes the coward's way out. Zach manages to pull things out in the end though and he and Regan end the story starting their HEA.

Overall, this was a good story but it was rather predictable and there was a loose ends or 2 that didn't get tied up at the end that left me wondering. I liked Zach as the hero and had no complaints about him. Regan was a good heroine in some ways but overall her refusing to tell Zach the whole truth and then her actions at the end really disappointed me. Still, I was thankful that Zach pulled things out and gave us a happy ending.

* note - The narrator did an alright job but there were a few times when I had trouble telling who said a line as the men's voices weren't always real distinctive from each other.

The story line of this book was decent but I absolutely could not stand listening to the narrator read this book to me. It was like listening to a love story being read to first graders. Horrible!

The narrator ruined the book.

Would you try another book from Bernadette Marie and/or Gale Cruz?

I liked the writing. I couldn't stand the narrating. The tone, inflection, and emotion was all off. I could have found a better narrator by grabbing the first person I found on the street.

Would you recommend The Executive's Decision to your friends? Why or why not?

I'll tell them to read the book. It looked like this narrator is lined up for the next one in the series so I won't be bothering with the audio book if that is the case. I'm not particularly picky either.