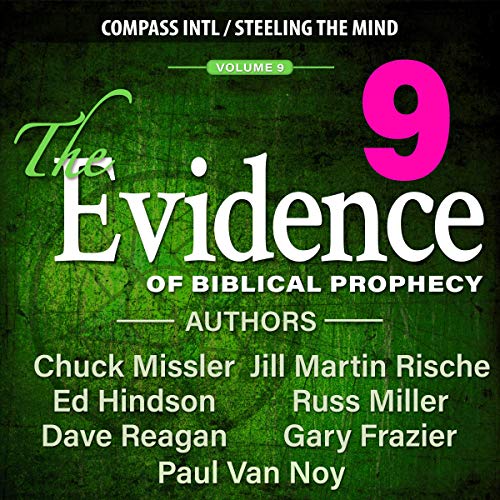 The Evidence of Biblical Prophecy, Vol. 9

Chapter One - "Israel, Muslims & the Last Days" by Chuck Missler. Now you can make sense of the Arab/Israeli conflict.

Chapter Two - "The Battle for Israel!" by Ed Hindson. God says Israel is the apple of His eye, chosen from all the peoples of the earth for His purposes. Those who support Israel will be blessed, those who don't, won't.

Chapter Three - "The Miracle of the Messianic Jew" by Dave Reagan. Some 80 percent of Christians believe that the Church is now the recipient of God's original promises to Israel. But is that in Scripture?

Chapter Four - "When All Hell Breaks Loose" by Jill Martin Rische. Growing up with the dynamic Bible teacher Walter Martin as her dad, Jill naturally learned a lot about the importance of good solid Biblical research. So what happens when the restrainer is removed, when God whisks us out of here? Not good, and you'll sure be glad we're gone!

Chapter Five - "The Implications of Living in the Days" of Noah by Russ Miller. The Bible says that the time just before rapture will be just like the time before the world-wide flood. We know a lot about the world just before God shut the door, so what are the implications for us today?

Chapter Six - "Israel in Bible Prophecy" by Gary Frazier. A boatload of fascinating information that will change the way you read the newspaper.

Chapter Seven - "Characteristics of the Tribulation" by Paul Van Noy. The tribulation will be a mess, worse than you can ever imagine! A great beginning-to-end expose of the time between rapture and the second coming.

What listeners say about The Evidence of Biblical Prophecy, Vol. 9