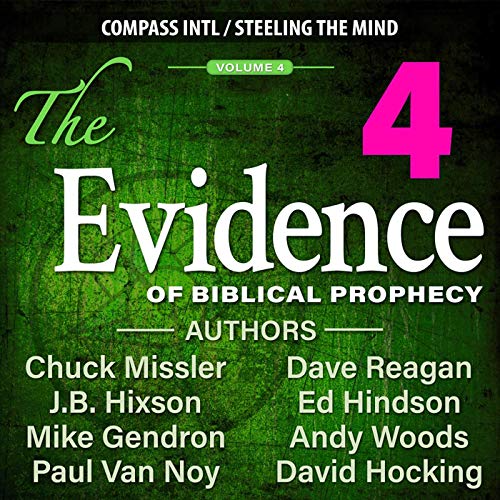 The Evidence of Biblical Prophecy Vol. 4

Eight great chapters of topics related to Bible prophecy reveal how close we are to the end times!

Chapter one: "The Best of Chuck Missler" by Chuck Missler - Chuck has over eight million awesome Bible studies in circulation worldwide. And we've edited together the best of the best into one hour of non-stop, slam dunk, off-the-charts comments that'll have you listening to scripture like nobody's business!

Chapter two: "Why Jesus is Pre-Trib" by Dave Reagan - Some 80-85 percent of Christians in the world do not believe in a future pre-tribulational rapture of true believers. Yet Jesus himself taught this truth. Dave shows the ridiculous doctrinal inconsistencies of believing anything but a mass removal of believers just prior to the coming tribulation.

Chapter three: "The Imminency of Rapture" by J. B. Hixson - This is a Bible prophecy lover's consummate study. J. B. walks us through the necessity of holding dearly to the doctrine of imminency.

Chapter four: "The Believer's Exciting Future!" by Ed Hindson - With all that's going on in the world, this will be a stand-up-and-yell presentation meant to keep you looking up, not down!

Chapter five: "Satan in Bible Prophecy" by Mike Gendron - Mike covers several fascinating future events including when Satan's thrown to the Earth and takes over the body of the dead world leader.

Chapter six: "Seven Irrefutable Reasons You Can Trust Pre-Trib Rapture Position" by Andy Woods - Are you looking for Jesus or the anti-Christ? Andy uses tons of scripture to expose the nonsensical mid, post, and a-mill eschatological positions.

Chapter seven: "The Incredible Effects of Rapture" by Paul Van Noy - A great study of what happens to Christians, and non-Christians, at the moment of rapture.

Chapter eight: "Why Jesus Is Premillennial" by David Hocking - One of the biggest hoaxes in the history of the Church Age is the blasphemy called a-millennial teaching.

What listeners say about The Evidence of Biblical Prophecy Vol. 4