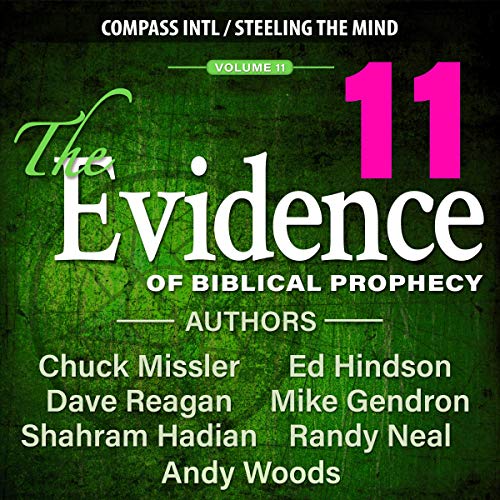 The Evidence of Biblical Prophecy, Vol. 11

Chapter one - "The Relentless March of Global Government" by Chuck Missler

Chapter two - "Get Excited: Jesus Is Coming!" by Dave Reagan

Outlining all that's going on that points to the soon arrival of our Lord and Savior, Dave will get dead men excited about the soon return of Jesus to a non-expecting and unprepared world.

Shahram explains what is going on around the world from a Biblical perspective. And it's shocking!

Chapter four - "In Defense of Israel" by Ed Hindson

If you want to really know what's going on in the world, watch Israel! So goes Israel, so goes the world.

The Bible has a plethora of verses describing what the world will be like just before the Rapture, and Mike delves into them all. You'll be amazed at these 2,000-3,000-year-old sobering prophecies about the times in which we live.

Chapter six - "Israel: Why Her Fight Is Our Fight" by Randy Neal

One of the most important reasons the United States has been allowed to prosper is to be able to defend Israel as God gathers her people back to their homeland. If that defense ever falters...oh, what a mess!

Chapter seven - "Is 2 Thessalonians 2 Referring to Apostasy or Rapture?" by Andy Woods

While most Bible scholars teach that 2 Thes 2 is referring to a "falling away" that will happen at the end of the age, Andy walks us through a different, yet Scripturally sound interpretation.

What listeners say about The Evidence of Biblical Prophecy, Vol. 11