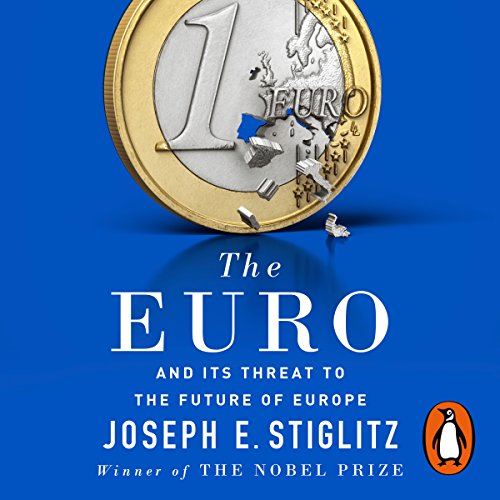 And Its Threat to the Future of Europe
By: Joseph Stiglitz
Narrated by: Mike Fitzpatrick
Length: 13 hrs and 28 mins
Categories: Business, Commerce & Economy
3.0 out of 5 stars 3.0 (1 rating)

Penguin presents the unabridged downloadable audiobook edition of The Euro: And Its Threat to the Future of Europe by Joseph Stiglitz, read by Mike Fitzpatrick.

From Nobel Prize-winning economist and best-selling author Joseph Stiglitz, author of Globalization and Its Discontents, this is the essential audio guide to the future of Europe.

Solidarity and prosperity fostered by economic integration: this principle has underpinned the European project from the start, and the establishment of a common currency was supposed to be its most audacious and tangible achievement. Since 2008, however, the European Union has ricocheted between stagnation and crisis. The inability of the Eurozone to match the recovery in the USA and UK has exposed its governing structures, institutions and policies as dysfunctional and called into question the viability of a common currency shared by such different economies as Germany and Greece.

Designed to bring the European Union closer together, the euro has actually done the opposite: after nearly a decade without growth, unity has been replaced with dissent and enlargements with prospective exits. Joseph Stiglitz argues that Europe's stagnation and bleak outlook are a direct result of the fundamental flaws inherent in the euro project - economic integration outpacing political integration with a structure that promotes divergence rather than convergence.

Money relentlessly leaves the weaker member states and goes to the strong, with debt accumulating in a few ill-favoured countries. The question, then, is: Can the euro be saved? Laying bare the European Central Bank's misguided inflation-only mandate and explaining why austerity has condemned Europe to unending stagnation, Stiglitz outlines the fundamental reforms necessary to the structure of the Eurozone and the policies imposed on the member countries suffering the most. But the same lack of sufficient political solidarity that led to the creation of a flawed euro 20 years ago suggests that these reforms are unlikely to be adopted.

Hoping to avoid the huge costs associated with current policies, Stiglitz proposes two other alternatives: a well-managed end to the common currency or a bold new system dubbed 'the flexible euro'.

This important audiobook, by one of the world's leading economists, addresses the euro crisis on a bigger intellectual scale than any predecessor.

What listeners say about The Euro

The EC and ECB has a lot to learn from Stiglitz

The author succeeds in explaining the major flaws in the Euro project, the requirements for a functioning common currency area and the mistakes made in managing the Euro crisis. The author concludes with a way forward. While many valid arguments are presented and the author convincingly argues for more stabilisers and solidarity in the Eurozone, the evidence presented is clearly biased. For example, Sweden is as non-Euro EU member presented as counterfactual and has outperformed the Eurozone, while the other spends little time on Denmark which as non-Euro member has done worse than the Eurozone). Other facts mentioned are just not true. The author picks from the hundred of measures suggested(or according to the author forced upon Greece) two to make his case, but fails to get the facts straight: according to the author policy was forced upon Greece to benefit Dutch diary producers, but inspecting the facts shows that there is no presence of these companies on the Greece market. Some of the way forward, such as the banking union is already partly implemented, while other parts are just political or practical impossibilities. The book seems to consist out of a set of independent essays, which makes that there is a lot of overlap, i.a. repetition, between the chapters. Despite some of the concerns mentioned above, I enjoyed the book, as it stimulates us to think more about how to restructure the Euro project.

The Truth about the Euro

Revelations from start to finish and this book should be interesting to anyone who asked the question what happens after we leave Europe.

I have read other book for Joseph Stieglitz and despite. Disagreement I respect his point of view but with this one was edited very badly with a lot of repetition and miss order I do disagree with many idea in the book but the author ideas have been presented very bad in here to make the book so long and repetition !!

A little too Left wing

Stieglitz is clearly an accomplished economist but I feel his views are presented in a very unbalanced way. This work is a treatise in the limitations of the single currency of the euro. This is clearly done and done well but there is a consistent left wing ideology throughout. Although I am fine with reading this, I had expected something a little more balanced.
But servers purpose of understanding a little more of the single currency.
The afterward on Brexit was particularly good - although it would have been better if this could have been reworked throughout.
The conclusions are reasonable.