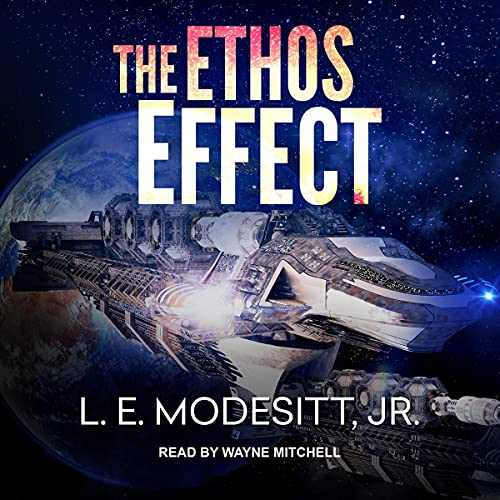 Set two centuries later, after the events of The Parafaith War, Commander Van C. Albert, the resourceful officer who once defeated a larger enemy ship, indirectly caused the loss of a civilian liner. Cleared by the board of inquiry but an embarrassment to the high command, he finds himself in dead-end assignments.

Seriously wounded foiling an assassination, Van awakes from a coma to find that he's been decorated, promoted, and summarily retired. Looking for new employment, Van will find that a simple piloting job turns him into a point man in a conflict that will shake the worlds.

What listeners say about The Ethos Effect

I like the premise of the book, but it is not up to the standards of quality I expect from Modesitt. For example, the romantic interest ended up basically being a few thousand words of content describing several meals, one request for data, and almost nothing else. That one information request that moved the story forward could have easily been provided via another source, without describing several meals. As I said, it feels to me like this book lacked a critical editor.