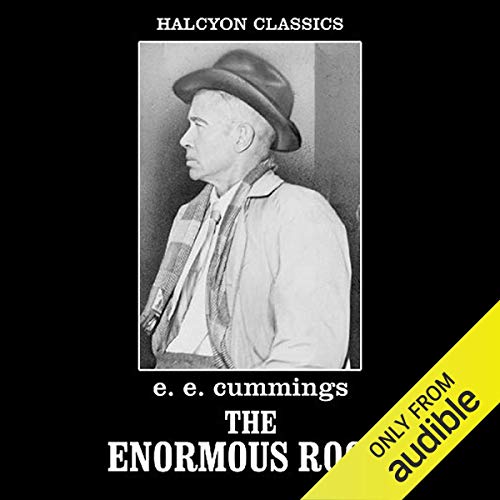 Narrator Ken Kliban gives a definitive performance of e. e. Cummings' autobiographical novel about his temporary imprisonment in France during World War I for supporting his friend's anti-war statements. Kliban perfectly captures Cummings' mixture of intellectualism and wit as he describes the people he meets and the absurd situations he finds himself in during his four-month incarceration. The other characters are also vividly embellished with accents and mannerisms that make them stand out, and listeners will feel as though they know these people from real life.

The Enormous Room is a 1922 autobiographical novel by the poet and novelist E. E. Cummings about his temporary imprisonment in France during World War I.

Drawing on his experiences in France as a volunteer ambulance-driver, Cummings recounts the series of mistakes that led to his arrest and imprisonment for treason. This edition restores much of the original manuscript.

What listeners say about The Enormous Room

I chose this book to read as part of my reading about world war one. Edward Estlin Cummings is a well known poet and artist of the 20th Century. This book "The Enormous Room" was published in 1922. Cummings enlisted in 1917 to serve in the Norton-Harjes Ambulance Corp along with some of his friends. The book tells about his and William Slater Brown's arrest by the French Military on suspicion of espionage and undesirable activities. The charges came about from a letter Brown wrote home. Apparently there was a problem with an over zealous censor translating from English to French. They were held in several jails then held 31/2 months in a concentration camp at Depot de Triage in La Ferte-Mace Orne, Normandy. They were never charged, or had a trial, just put into prison. I found it interesting that Cummings did not get angry or upset. He looked on the episode as an adventure and was fascinated to meet so many different types of people from so many countries. He tried to learn different languages and as much about the people as possible. They were all confined it a giant room most were like him held without trial or charges. He said some were guilty most were not. He finally was released when his father went to President Wilson to seek his help. After he was released and returned to the U.S. in January 1918 he was drafted into the U.S. Army and served in the 12th Division. After the war he lived in France for a few years and fell in love with Paris, he never let the experience make him bitter about France or it's people. The book is up beat and Cummings since of humor comes through with his description and names he gives various people. I shall have to read some of his poetry, I only have vague memories of them from school. If you are interested in history this book would interest you. Ken Kliban did a great job narrating the book with all the French words.

The Prose of Panopticons

It struck me at the time as intensely interesting that, in the case of a certain type of human being, the more cruel are the miseries inflicted upon him the more cruel does he become toward anyone who is so unfortunate as to be weaker or more miserable than himself."
― E.E. Cummings, The Enormous Room

Prison Literature as a genre is fascinating. Like war literature, there is this gap between those who have actually lived in prison and their experiences and those who imagine. Certainly the job of the fiction writer is to explore spaces unknown to most, and perhaps unknown even to the author. Science Fiction is filled with writing that follows that pattern. However, from the several novels I've read by authors who have actually been in prison (like books written by those who have actually fought in war), the experience seems to create an almost surreal or absurd view of things. E.E. Cummings who was incarcerated by the French during WWI because of letters written by his friend, portrays this absurdity of confinement in this novel, and just as Dostoevsky does in Notes from a Dead House or Solzhenitsyn does in One Day in the Life of Ivan Denisovich. I could continue the list with works by Paul Bunyan, Cervantes, Marque de Sade, Chester Himes, O. Henry, Jack London, Jean Genet, Oscar Wilde, etc. I could also include the political writing and books by Napoleon, Hitler, Malcom X, Mussolini, etc.

Obviously, the political tracts written in prison (or even the religious tracts too) deserve a lot of attention, but 'The Enormous Room' has more in common with Kafka and the modernists than it does with any protest writing. It is the attempt by the trapped artist to create something from an experience. It is a scratch to explain, a scribble to remember, a set of words meant to make sense of the absurdity of the cell. This isn't a perfect book and I will be the first to admit I prefer E.E. Cummings poetry to his prose. But it is also an important marker. It is a novel that shows just how warped even good systems can get during war, and just how pleasant some captives really are. In many ways Cummings wasn't writing to right some wrong, or to expose some evil. He seemed to treat his experience in France as almost an illness, a temporary convalescence that served as a puparium. It wasn't an obvious transformation. He didn't walk in an innocent and exit an artist, but it seemed to be a vector of growth, an accelerant toward the artist.

As I write this I also think there is a natural pull of artist and prison. Does that seem harsh? Prisons represent the ultimate impulse to control for conformity. It is natural that this impulse seeks out and grabs the artist; the ultimate non-conformist. Society is always trying to keep the artist in check, and when the odd, the aberrant, the avante-garde appears too far ahead, too dangerous for the masses, it is often easier for society to just lock the odd up. I don't think this is likely to ever change. There will always be conflict between Pan and Panopticon.

As Skilled as His Poetry. Masterful.

e.e. cummings is a brilliant poet, and in The Enormous Room he shows his mastery of non-fiction prose as he recounts his imprisonment by French authorities during the first world war.

A very good book for a student of French language.

Save your money. Pass on this story.

Would you try another book from E. E. Cummings and/or Ken Kliban?

What could E. E. Cummings have done to make this a more enjoyable book for you?

This story lacked any drama. Like watching paint dry.

Who would you have cast as narrator instead of Ken Kliban?

Narrator did an OK job. He didn't have much to work.

Audio of the 1922 version not approved by author

This audio is quite well performed and gets the ironic tone of Cummings's WW1 imprisonment told as a bit of a lark very well. Purchasers should be aware that this appears to be the text of the 1922 edition, which omitted some quite long passages from the 'fair copy' text of the manuscript and translates many of the French passages into English. The author called these 'stupidities' in a letter to his father, but I suspect most listeners will not mind them and may even prefer this version as more comprehensible.

As usual, I like to separate comment on the quality of the work from my rating of the quality of the recording, which is a 4-star performance. The work itself is interesting insofar as telling of a strange (and outrageous) miscarriage of justice, but becomes quickly repetitive and is rather long for what it achieves. One might say that the boredom replicates that of being imprisoned for an unclear offence and an indeterminate length of time and thus is a modernist replication of medium as message, but that might not be enough interest to hold many listeners.