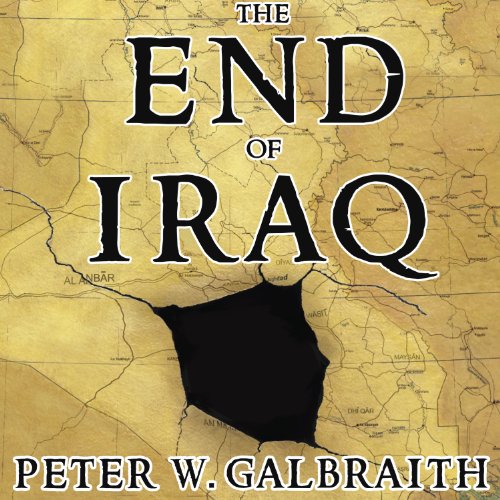 The End of Iraq

The End of Iraq

The End of Iraq: How American Incompetence Created a War Without End is a thorough account of America's war on Iraq and the consequences of this military involvement. Alan Sklar's performance accentuates the gravity of the subject. Sklar's sober tone and the steadiness of his voice make it easy for the audience to trust the content presented herein. In The End of Iraq Galbraith examines the factions within Iraq's population and explains how these divisions impede America's exit from the region. This is a well-researched and engaging audio, full of essential information for Americans interested in foreign policy.

The United States invaded Iraq with grand ambitions to bring it democracy and thereby transform the Middle East. Instead, Iraq has disintegrated into three constituent components: a pro-western Kurdistan in the north, an Iran-dominated Shiite entity in the south, and a chaotic Sunni Arab region in the center. The country is plagued by insurgency and is in the opening phases of a potentially catastrophic civil war.

George W. Bush broke up Iraq when he ordered its invasion in 2003. The United States not only removed Saddam Hussein, it also smashed and later dissolved the institutions by which Iraq's Sunni Arab minority ruled the country: its army, its security services, and the Baath Party. With these institutions gone and irreplaceable, the basis of an Iraqi state has disappeared.

The End of Iraq describes the administration's strategic miscalculations behind the war as well as the blunders of the American occupation. There was the failure to understand the intensity of the ethnic and religious divisions in Iraq. This was followed by incoherent and inconsistent strategies for governing, the failure to spend money for reconstruction, the misguided effort to create a national army and police, and then the turning over of the country's management to Republican political loyalists rather than qualified professionals. As a matter of morality, Peter W. Galbraith writes, the Kurds of Iraq are no less entitled to independence than are Lithuanians, Croatians, or Palestinians. And if the country's majority Shiites want to run their own affairs, or even have their own state, on what democratic principle should they be denied?

What listeners say about The End of Iraq

I enjoyed this volume tremendously. The author made a very convincing case and detailed outline of how and why the Republican plans for Iraq never succeeded from the outset. The book however, degenerated from contemporary history to a polemnical memoir, which is a pitfall for all contemporary histories, the event has yet to condense. I enjoyed this book nonetheless, the author is very knowledgeable about the political, historical and ethnic dynamic in Iraq.

Currently sitting in Baghdad, Iraq with my platoon of Soldiers, I began wondering the deeper, non-personal reasons why I was in my current situation. The title to this book is no lie, as seen by the endless stream of nauseating facts laid out by Peter Galbraith. Every sentence leaves you wishing the book would end sooner, not because of lack of literary talent, but simply due to the almost criminal decisions being made by our leadership. Although not much for a plot, be prepared to be pummeled with well-organized facts describing how each decision led to an outcome, reshaped the battlefield, and was followed by another disastrous decision. Stepping away from the always biased media, Peter Galbraith gives the first complete, organized, intelligent, behind the political scenes view of where this country is, how it got there, and where it is heading. This book is a must read for Soldiers, politicians, and any citizen who is wondering where 23% of America's budget goes every year.