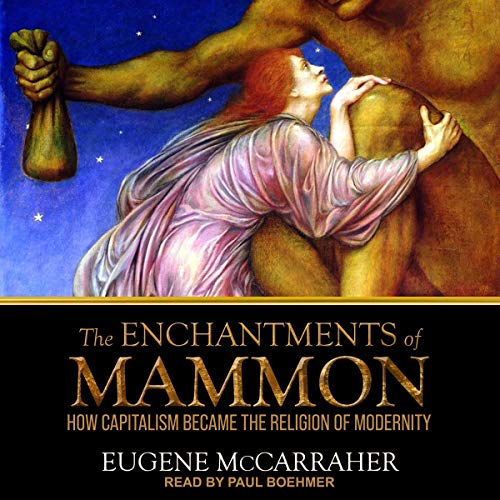 The Enchantments of Mammon

If socialists and Wall Street bankers can agree on anything, it is the extreme rationalism of capital. Ignoring the motive force of the spirit, capitalism rejects the awe-inspiring divine for the economics of supply and demand.

Eugene McCarraher challenges this conventional view. Capitalism, he argues, is full of sacrament, whether or not it is acknowledged. Capitalist enchantment first flowered in the fields and factories of England and was brought to America by Puritans and evangelicals whose doctrine made ample room for industry and profit. Later, the corporation was mystically animated with human personhood, to preside over the Fordist endeavor to build a heavenly city of mechanized production and communion. By the 21st century, capitalism has become thoroughly enchanted by the neoliberal deification of "the market".

The Enchantments of Mammon looks not to Marx and progressivism but to 19th-century Romantics for salvation. The Romantic imagination favors craft, the commons, and sensitivity to natural wonder. It promotes labor that, for the sake of the person, combines reason, creativity, and mutual aid. In this impassioned challenge, McCarraher makes the case that capitalism has hijacked and redirected our intrinsic longing for divinity - and urges us to break its hold on our souls.

What listeners say about The Enchantments of Mammon

McCarraher brings a lot of history into this book. I found it very engaging. The only drawback was the narrator switching into different accents. It was unexpected and distracting. I’m sure on my second or third time through, I probably won’t even notice it...

A world not disenchanted, but enchanted by capital.

Well done analysis of capitalist enchantment, less valuable suggestions for changing the world. Needs more explanation of imperialism and greater understanding of Debs. The artisanal world the author wants is, I think, the result Marx wanted. But it can’t be the answer to how we get there.