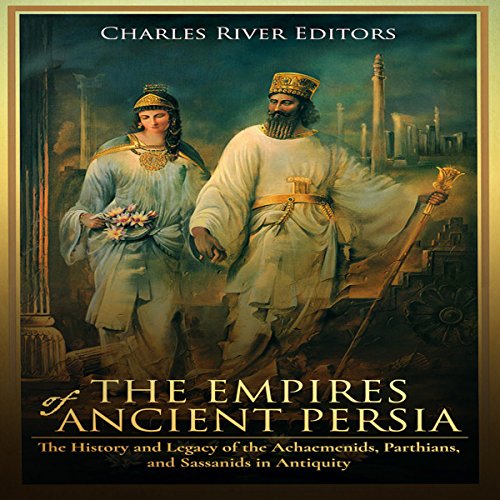 The Empires of Ancient Persia

Lying in the middle of a plain in modern day Iran is a forgotten ancient city: Persepolis. Built two and a half thousand years ago, it was known in its day as the richest city under the sun. Persepolis was the capital of Achaemenid Persian Empire, the largest empire the world had ever seen, but after its destruction, it was largely forgotten for nearly 2,000 years, and the lives and achievements of those who built it were almost entirely erased from history. Alexander the Great’s troops razed the city to the ground in a drunken riot to celebrate the conquest of the capital, after which time and sand buried it for centuries.

It was not until the excavations of the 1930s that many of the relics, reliefs, and clay tablets that offer so much information about Persian life could be studied for the first time. Through archaeological remains, ancient texts, and work by a new generation of historians, a picture can today be built of this remarkable civilization and their capital city. Although the city had been destroyed, the legacy of the Persians survived, even as they mostly remain an enigma to the West and are not nearly as well understood as the Greeks, Romans, or Egyptians. In a sense, the Achaemenid Persian Empire holds some of the most enduring mysteries of ancient civilization.

The Parthian people created an empire that lasted almost 500 years, from the mid-3rd century BCE until 224 CE, and it stretched from the Euphrates River in the west to Central Asia and the borders of Bactria in the east (Brosius 2010, 83). In fact, the expansive empire challenged the Romans on numerous occasions for supremacy in the Near East, created the first sustainable link between the peoples of Europe and East Asia, and followed a religion that many consider to be the oldest form of monotheism in the world; but despite these accomplishments the Parthians are often overlooked in favor of the Achaemenid and Sassanid Persians who came before and after them respectively, not to mention the Romans themselves. Although the Parthians may not get top billing in most popular histories of the period, they left an indelible mark on the world that cannot be overstated.

During the first half of the 1st millennium CE, an empire arose in Persia that extended its power and influence to Mesopotamia in the east, Arabia in the south, the Caucasus Mountains in the north, and as far east as India. This empire, known alternatively as the Sasanian Empire or Sassanid Empire, was the last of three great dynasties in Persia—the Achaemenid and the Parthian being the first two dynasties—before the rise of Islam. In fact, many scholars consider the Sasanian Empire to be the last great empire of the ancient Near East because once it had been obliterated, Islam became the standard religion of the region, ushering in the Middle Ages.

What listeners say about The Empires of Ancient Persia

Would you listen to The Empires of Ancient Persia again? Why?

This is exactly the kind of introduction to Persian history I've been looking for. It's very accessible. I'm only part way through, but it's got great information clearly expressed.

I'm finding the narration very problematic. While the narrator is very clear in enunciation, there are no pauses for ends of paragraphs, which makes some of the content seem to leap around. The pauses at the ends of sentences are very short, again making some of the content blur together. I think I'm more frustrated because it could have been a great narration with a little room to breathe. It feels like this is possibly an advanced computer voice, a narrator who is rushing to get through the book, or the editors got carried away in eliminating pauses.

I have to agree with the other reviewer, why is almost 40% of this book about the Greeks? don't get me wrong, it's interesting and I appreciate learning this aspect of history. What I was looking for is to learn about a different culture, instead the author was unable break out of his geocentric worldview and somehow navigated the book back towards Western civilizations. Unfortunate and disappointing.

Try to understand all of history

I’m working on Mesopotamia area and surrounding history. What’s up, can’t find Armenian History in “detail” in the period of 50ad-late 100’s ad. Anyone who knows the scoop

A history of Greece or of Persia?

This books spends a majority of the time on the Greco Persian Wars which is infuriatingly misleading. It gives a play by play of that conflcit and passes over the details of the Achamaenid expansion and gives only 2 hours between the Parthians and the Sassanids. I should have expected this, when has the West ever written a decent book on Iranian history that is widely available to the public. This has increased my own determination to write a better and more relevant book on Iranian history. This book may be only useful for noobs.