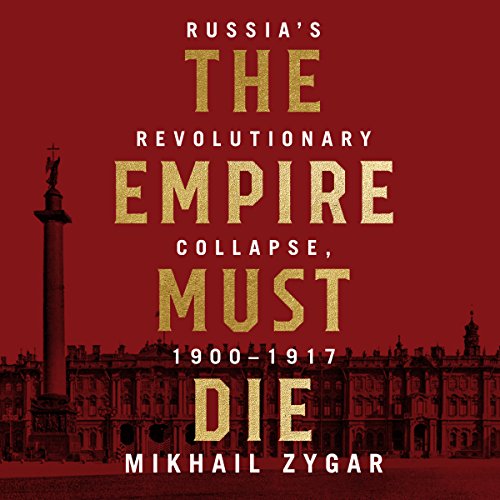 The Empire Must Die

The window between two equally stifling autocracies - the imperial family and the communists - was open only briefly, in the last couple of years of the 19th century until the end of WWI, by which time the revolution was in full fury.

From the last years of Tolstoy until the death of the Tsar and his family, however, Russia experimented with liberalism and cultural openness. In Europe, the Ballet Russe was the height of chic. Novelists and playwrights blossomed, political ideas were swapped in coffee houses, and St. Petersburg felt briefly like Vienna or Paris. The state, however, couldn't tolerate such experimentation against the backdrop of a catastrophic war and a failing economy. The autocrats moved in and the liberals were overwhelmed. This story seems to have strangely prescient echoes of the present.

What listeners say about The Empire Must Die

An excellent look at an interesting history.

A documentary format, if you will, through old diary and other forms to look on those interesting and dark days. Narration by Simon Vance is excellent as always, a narrator I love to hear, among many others, American and British.

Have to agree with boring review

This book is VERY boring. And I seek out long novels- many of them historical- that would be considered boring by the typical reader. Simon Vance is great; one of my favorite narrators. I just can’t even explain the tedium.

This was a decent history book.

This book was done well. It has a good ratio of data-to-anecdote. Your won't get lost in the weeds too much with repetitive listing of dates and people, but that info is included where relevant.

It will give you a good grounding on how the stage was set for the Communist regime of early 20th century.

OMG This Is Boring

I have listened intently to many long audio books about history, things that would make other people fall asleep at the wheel. I love them. But this is a boring book. It has the occasional interest tidbit. But waiting for those is agonizing. I really wanted to like it.

An excellent & very interesting account of the Russian Revolution & the atmosphere of the late Russian empire written by a distinguished contemporary Russian, Mikhail Zygar, one of the many experts interviewed in the Putin Files, available on youtube. Beware though, this book is unavoidably complicated! Here are chapter titles from the printed book. Sadly Audible doesnt provide them. And there are several audio chapters per actual chapter.

Ch. 1 Leo Tolstoy becomes a symbol of the fight against the regime and the main ideologist of the opposition
Ch. 2 Sergei Witte fails to stop Russia from invading China and seizing Beijing
Ch. 3 Jews go on the war path: Mikhail Gotz and Gregory Gershuni create the most powerful opposition party in Russia
Ch. 4 Liberals come into fashion: Peter Struve and Pavel Milyukov become the most popular politicians in the country

Ch. 5 Empress Alexandra and Dowager Empress Maria argue over who will be mistress of the palace and of Russia
Ch. 6 Russia gets a new leader of popular protest: his name is Georgy Gapon
Ch. 7 Black-Hundreder Alexander Dubrovin creates the first Russian party of the state, and oppositioner Maxim Gorky asks the West to stop funding Russia
Ch. 8 Pyotr Stolypin and Dmitriy Trepov suggest two different ways of reforming Russia

Ch. 9 Art fan Sergei Diaghilev and religious fanatic Sergei Trufanov (Iliodor) try to stay independent from the state and even use it to their advantage
Ch. 10 Millionaires Alexander Guchkov and Pavel Ryabushinsky try to engage big business in managing the country
Ch. 11 Grigory Rasputin becomes the most powerful kleptocrat and the most hated pacifist in Russia
Ch. 12 There is a second leader of popular protest in Russia: his name is Alexander Kerensky

Ch. 13 Irakli Tsereteli tries to turn Russia into a parliamentary democracy and Vladimir Lenin stands in his way
Ch. 14 Leon Trotsky and Lev Kamenev don’t wish for a Bolshevik revolt anymore, since they believe it to be completely unnecessary

This is a superbly dynamic retelling of the years leading up to the October Revolution. As a historian I was wary of how a journalist might use the sources. I couldn't have been more wrong. His researches and interpretation have produced a vivid, exciting, and truly memorable illumination of the time by focusing on the personal experiences of many of the main characters directly involved in how the changing pattern of events played out.

This is a really interesting and important story about a true turning point in history. The narrator does a good work but as a audio book it's kind of a tough bite to chew. Loads of names, places and other things, mainly of Russian origin, made it (for me) sometimes hard to follow all the, albeit interesting, characters and story arch's.

An excellent and broad account of the Tsarist collapse, the individual events that unfolded around it and the contributing factors toward it. Lots of involvement from many key players helps to build quite a story which is well worth the listen.

Better than the old song Lenin Bolshevik Romanov narrow band Revolution history... There was a wider landscape... a lot more people and many more incidents than we are generally told about. Much appreciated.

to the history of the world's worst man made catastrophe. for the last 30 years I have been a scholar of Russian history and this book contextualized the most extraordinary event.

doubly relevant today, when the evil of Bolshevism appears to have been consciously forgotten.