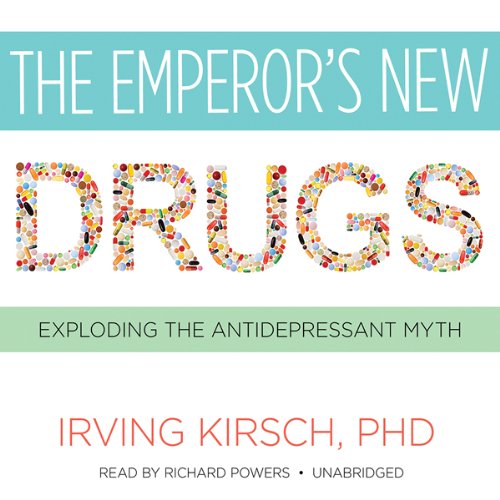 Irving Kirsch has the world doubting the efficacy of antidepressants. Do they work, or are they no better than placebos? Like his colleagues, Kirsch spent years referring patients to psychiatrists to have their depression treated with drugs. Eventually, however, he decided to investigate for himself just how effective the drugs actually were.

With 15 years of research, Kirsch demonstrates that what everyone “knew” about antidepressants is wrong; what the medical community considered a cornerstone of psychiatric treatment is little more than a faulty consensus. But The Emperor’s New Drugs does more than just criticize: it offers a path society can follow to stop popping pills and start proper treatment.

“[Kirsch’s] case that the drugs’ benefits are due to placebo and enhanced placebo effect is fascinating and demands urgent research…Clearly, it’s time for a big rethink of what constitutes mental illness and about how to treat it.” ( New Scientist)
“ The Emperor’s New Drugs absolutely dismantles the case for antidepressants as a pharmacologically effective treatment.” ( Psychology Today)
“[A] spare, remarkably engrossing book…Kirsch is a faithful proponent of the scientific method, and his voice therefore brings a welcome objectivity to a subject often swayed by anecdotes, emotions, or…self-interest.” ( New York Review of Books)

What listeners say about The Emperor’s New Drugs

I am weaning off of ssri's and have replaced them with 5htp, L tyrosine and lots of other vitamins and I'm thriving. never again!

Anyone in or near depression needs this book to make an educated decision about treatment!

I’m ambivalent about this book.

When I started reading this book, I found it very illuminating. I recognize that there is a placebo and nocebo effect and I find them very interesting. But had no idea that they were so strong, particularly with psychogenic drugs. So I did find many of the doctor’s findings to be quite thought-provoking and I think going forward, psychiatry would be well advised not to dispense psychotropic medications so easily and as the only line of treatment. Clearly talk therapy and CBT along with exercise and nutrition and good sleep hygiene and socializing are part of an overall package for relieving depression.

BUT I believe that Dr. Kirsch went overboard by "throwing the baby out with the bath." He made it sound like nobody needed antidepressants. He also did not fully to my satisfaction distinguish between psychotic and nonpsychotic events and depression meds for bipolar episodes and lesser depressive episodes. I find it very hard to believe that anybody who is psychotic is going to react to a placebo just like placebos are NOT going to cure anybody's blindness or cancer.

My fear about this book is that people who need medication for severe PTSD or disabling depression will think that they can throw their meds out and that their meds are bad for them. I would be the first to agree that psychotropic meds, especially antipsychotics, can have nasty side effects but often enough they are lifesavers and I do think we have made progress in the last 50 years. And Dr. Kirsch has ignored this. I hope people with mental health issues who are currently on meds that may not be working will take his advice with a very large grain of salt.

much of psychiatry is psedoscience

not just showed how the psychiatric industry works on flimsy scinetific evidence and without proper understanding but brings to light how the pharma industry in general uses biased, self interest funded, even weighted studies to get by what it wants.

it was fine, but could have been half as long

some of the data and information was interesting but repetitive. I didn't feel the case was presented as firmly as the closing implied and there were some audio hiccups where the narrator read the same line twice.

I wish everyone interested in mental health and working in that field would read this book!

A book about placebo, with a focus on antidepressants

Interesting and a must if you’re on or thinking about taking antidepressants. But more of a scientific analysis of placebo than anything

even better than expected

I was familiar with antidepressants, but this book was still incredibly revealing. So many little things that are not seen to a casual observer. I thoroughly enjoyed the book and learned to ask better questions.

This is a well presented review of key Mental Health treatment research. The Author spends a significant part of the book explaining in detail the Placebo Effect and its history / Evidence.

A good book with some very valid points and evidence, Now get some Excersise and CBT!

Note that you should NOT stop taking antidepressants as a result of listening to this if you take them without consulting your doctor first, partly because there can be withdrawal symptoms. This warning is included within the work itself.

The work provides pretty compelling arguments for the point of view that antidepressant medications are about as effective as placebos.

I would say that this is a useful listen if you suffer from depression or have somebody close to you who suffers from depression who you wish to help, but you should be careful how you use the information. The end goal is, of course, to get better, and drugs do help with that goal. Other therapies could provide similar or better results without side effects.

The narrator references figures that have not been included with the audio version of this book. Perhaps that's something audible can correct.

Great insights, but depression not a disease?

This book has some great insights and puts into perspective some of the very damaging practices used to 'evaluate,' drug efficacy. My one issue with both the book and author are that in spite of this insight he seems to be under the impression that depression is not actually a disease. Nor are there any suggestions for actual effective treatments for depression.

Good - as far as it goes

Would you try another book written by Irving Kirsch or narrated by Richard Powers?

Would you recommend The Emperor's New Drugs to your friends? Why or why not?

Not particularly. I can see why this book and supporting arguments cause controversy in the field.
He does make an excellent case about the limits of placebo studies where the side effects of the drug in question are conspicuous (i.e. you can't run a good double blind trial of antidepressants: the presence - or not - of tell-tale side effects means that people can tell whether they've been given the actual drug or the placebo).

But - this isn't the same as disproving that antidepressants, in particular, have an effect. He questions the 'brain chemical' theory of depression based just on the placebo argument, but this is quite insufficient. For example, illegal drugs such as MDMA have a mood enhancing effect clearly brought about by changes in brain chemicals (and neurotransmitters in particular). There does seem a relationship between brain chemicals and depression, and whilst it may not be well understood, the author seems to be saying that the whole theory is plain wrong, and that neurotransmitters have nothing to do with depression.

The book would be better as a critique of placebo studies in general rather than one of antidepressants in particular, but this wouldn't sell as many books.