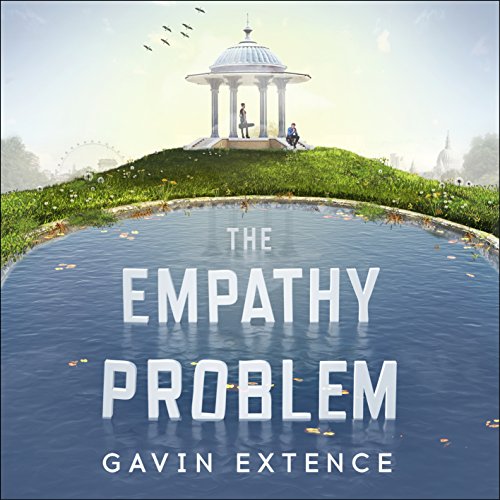 Driven by money, power and success, Gabriel has worked ruthlessly to get to the very top of the banking game. He's not going to let the inconvenience of a terminal brain tumour get in his way. But the tumour has other ideas. As it grows, it appears to be doing strange things to Gabriel's personality. Whether he likes it or not, he seems to be becoming less selfish, less mercenary, less unlikeable. Once he could dismiss the rest of humanity as irrelevant. Now he's not so sure.

Women in particular are becoming worryingly three-dimensional. And none more so than Caitlin, the unremarkable girl he sees busking on the steps of St Paul's Cathedral. When she plays her violin, Gabriel could almost believe that he has a soul.... But as each day that passes brings him closer to his last, has time run out for second chances?

Best-selling author Gavin Extence pushes the envelope again with another thought-provoking and funny novel about the surprises, good and bad, that life can throw at us.

What listeners say about The Empathy Problem

15 out of 10 if I could. Equally as good as the author's 1st book. Interesting story lines merged into one. Poignant & again made me audibly laugh quite a bit, even though there was tragedy. I hope Extence is writing a 4th book by now. I will be buying all of this author's works as soon as they are released. For me I found His 1st book was exceedingly good; it was excellent. His 2nd book very good & for me this 3rd book was again excellent. Hope he uses the same narrator for his 4th. I love the narrator's delivery too.

This may the story of an unpleasant man dying from a brain tumour, but please don’t be put off by the subject matter because this is enthralling. Gavin Extence uses a hedge fund manager as a modern day bogeyman and creates a redemption story that is as powerful as it is believable. The story covers big themes such as the nature of evil, the restorative power of love and whether people can really change their natures to become a better person. Along with this is a very satisfying story of revenge and reconciliation, all told with humour and style. I particularly enjoyed the backdrop of the London Occupy camp in Paternoster Square. I was working in London at the time and I can vouch for the absolute authenticity of the events described.
The narrator, Jack Hawkins is perfect for the material.
I read the Alex Woods book and thought this one was possibly even better. Gavin Extence is a brilliant and fresh voice in the literary world and I really look forward to reading more from him. My only regret is that I have now finished listening to this fantastic story and will find it very hard to follow this up with another book.

The story is good, deep, meaningful and thought provoking. The setting is modern bringing to the fore events which happened during the financial crash whilst touching upon subjects which affect us all.
A book which leaves you thinking long after it's been read.
The narration is also excellent.

Much more than chic lit


I am surprised like another reviewer that this is classed as chic lit.

This book had a lot of soul and will be with me for a few days.

Jack Hawkins delivery was exemplary his voice and delivery were perfect.

Mr Extence writing of the glut and greed of capitalism from the people who work in that environment was spot on. He wove a great story on an emotional level of the evil, and subsequent comeuppance to do things right.

Well done think, I will have a look to see what else he has written.

Life affirming without being sentimental

I devowered this book over a couple of days. The narrative and the excellent narration make this a superb experience.

Young hedge fund manager tries to ignore his brain tumour and carry-on making money. The fact that he is lonely and leads a loveless life becomes apparent and he doesn't know whether his increasing interest in the occupy camp, just outside his place of work, is natural or due to his tumour.

The novel is more than the sum of the plot. It has it all - subterfuge, revenge, possible redemption and an increasing love for the protagonist as he learns feel empathy (and more) for others. All is achieved without sentimentality or hectoring - quite an achievement!

keep going it will be worth it

found the beginning hard going and nearly gave up but the second half was very good .the only other thing I did not like was that each chapter was so short , it interrupted the flow a bit as each chapter number was stated .

It took longer to get into this book

I really like the writing of Gavin Extence, but it did take me longer to get into this book than the Alex Woods, i think that was because I didn't immediately like the main character. But I did enjoy it, and will probably read it again, I also became fond of Gabriel. (The main character)
This author seems to have a different perspective on life and has a lovely way of writing.

I do have one criticism........ The narrator pronounces reMUNeration as reNUMeration ..... This is a frequent mistake by many narrators and it does irritate! Apart from that, I thought he did a superb job!

Okay, but a bit clunky

I thought this started off well but I got a bit tired of the laborious format. I was interested in the characters and the plot but found myself raising my eyebrows skywards at times. The plot is a very good idea but I found the writing lacked any great flair and I was quite glad when it finished.

What a brilliant book m. Hooked me in from the beginning and thoroughly enjoyable through to a satisfying end. First I have read by this author, but just downloaded two more :)

Absolutely give this a thumbs up. I laughed, cried and loved every word. Please listen to this book. You will change your perspective on life , money and love.