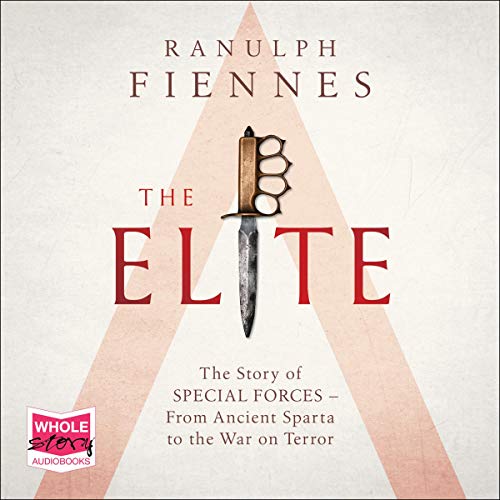 Five thousand years of military history. The best elite unites that have fought across the globe. Their story told by acclaimed adventurer and ex-SAS officer Ranulph Fiennes.

Throughout human history the art of warfare has evolved into many forms across numerous theatres, gradually becoming more sophisticated and strategised as the centuries have progressed. From the Spartans of ancient Greece with their code of valour fighting to the last man to the US Navy SEALs who operate using the latest technology of the 21st century.

Across the vast array of military campaigns and battles one can see that the majority of organised armies have been comprised of enlisted men who would have their basic training. As time progressed all countries saw the need to also have units that were the 'best of the best', that would be fit and strong and enjoy the best training and weaponry available. These elite units would be deployed to achieve extremely tough objectives, to guard a valuable fortification or person or to act as a barrier in a crisis. The term 'elite' is the ultimate accolade and one to which only the toughest would try to aspire to: undergoing intensive and harsh physical training and ultimately sacrificing themselves for the given objective.

Ranulph Fiennes himself served in Britain's toughest formation, the SAS. Since his military days he has won acclaim as an extraordinary brave and resourceful Arctic adventurer. It is fitting that he now looks back across 5,000 years of military history to pinpoint and celebrate the best elite units that served and fought across the globe.

What listeners say about The Elite

Every interesting , full of information that pertain today and yesterday and lesson repeated but not learned

Many of the reviews on the web have been unfair and very harsh in regards to this book. It is true that Ranulph Fiennes includes his own accomplishments in many of the chapters of the book. But honestly, he has so much experience that it provides a very personal take on what the special forces have to go through, from ancient to current day warfare. He's experienced the extremes in every way imaginable. This book is stacked full of knowledge that is mind-blowing.

Now the first few chapters are a bit slow, as some of the ancient battle information is a bit mundane. But it quickly speeds up, and Fiennes knowledge comes to the forefront. And then it is completely riveting.

Peter Noble always does a superb job narrating whatever he undertakes. This is no exception. It's a pleasure to listen to him.

Not a good book - great narrator though! - just stories of so-called military elites (obviously in the opinion of the author) with some basic historical errors, and far too many links to the authors own service with the RS of Oman's forces. We've heard it before, you never cease to remind us in every book. I really will have to stop buying his books but I always think, 'perhaps this one might be better?'

Arrogant & self obsessed, nearly an autobiography

So, I bought this expecting an in depth development of elite forces. What I listened to was a narcissistic dabbling that was used as a vehicle for the author to talk about himself. With regards to the history element there's not much here that wouldn't find in a Wikipedia entry. It's also debatable about what he considers "elite" to be. He glorifies Cromwellian reform measures as elite instead of maybe picking an interesting elite unit like say the Rhodesians! As for the narcissistic writing..every chapter has a tenuous link to something vaugely similar he did himself. I didnt purchase a book on military elites to continuously hear about Fiennes polar expositions! Yes Fiennes is an impressive explorer but if I wanted to listen to those stories I'd have purchased that book!

enjoyed this book from start to finish would recommend this even if you don't like the military.

This is an historical recount of some little known battles and the elite forces at that time. It is a fascinating read punctuated with anecdotes from Ranulph’s own unique adventures.
A worthy addition to any military history collection.

A worthwhile listen. A good historical and well informed narrative. Some good anecdotes and the story built its self well.

A good timeline of heroic deeds

A book about killers really, lots of mentions of the authors own family including himself, and tales of murderous daring across the world.