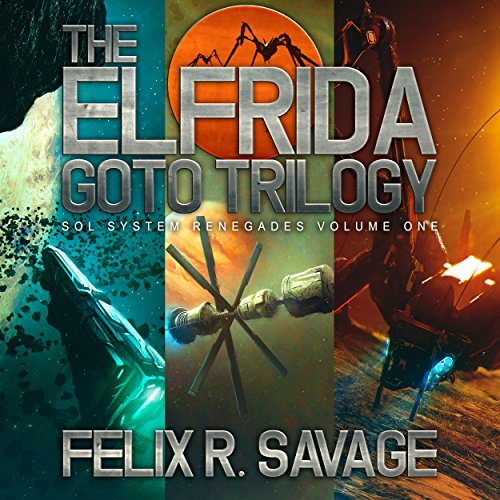 The year is 2285. Humanity is losing its grip on the colonized solar system. Genocidal AI terrorists ravage far-flung colonies, and the UN bureaucracy is seemingly determined to seize defeat from the jaws of victory.

Elfrida Goto, a Space Corps agent, is responsible for protecting vulnerable space colonists. But a ruthless conspiracy interferes, determined to use her for their own criminal purposes. Her career in ruins, Elfrida confronts the deadly forces threatening the solar system with nothing but courage, her sense of humor, a few good friends, and a sword that isn't even hers.

Trapped on a dying space station, stranded in the asteroid belt, and racing across the searing dayside of Mercury, the battle accelerates to a terrifying climax. Elfrida has one last chance to save humanity. But first she'll have to save herself.

What listeners say about The Elfrida Goto Trilogy

I first rated this book really poorly. Then I fell in love with it after I got through Book 3. Book 1 and 2 were not great, but it gets there.

This series is kind of a runner up to Expanse. Not as well defined, but certainly some of the author's best work. The characters are great. The last few books have been amazing and hilarious.

Bad luck is interesting when the star is competent

Make the main character competent. The premise of the book is interesting, you have someone that goes from place to place, and everywhere she goes interesting things happen. However, she never actually solves the problems, and always seems to be the dumbest person around. Like another reviewer has said it is almost dumb luck she survives.

I feel like the narrator did a good job for 90% of the book. However, I was really frustrated by the lack of attention to detail on Japanese words. Many times the narrator would give an attempt to pronounce European languages with accuracy, but not Japanese.

I feel like the author should have spent a couple of hours talking to a Japanese person that teaches Japanese so they cold learn to pronounce words properly. I am not sure how many times a cringed at pronunciation, and a few times was confused about what the word was.

There are some interesting things about the universe that really intrigue me. Main one being the communication the author has incorporated how we communicate today via text with emoji's and projected that into the future a possible way we communicate. Not solely the means of communication, but how we do now as a new forms of punctuation. Was an interesting interpretation.

I also found the religion aspect very interesting because the author goes a different way with it. He still brings in like most sci-fi, that religion is antiquated and a problem for humanity, however, he introduces the character to it and while she is not religious it does influence her in positive ways. I am not describing my observations very well, but it was interesting twist in how a sci-fi author works with religion.

I got the sense the author spent more time on universe building than character and plot development because the universe is very interesting.

The series where things just kind of work out in the end.

The setting is of particular interest in the trilogy where the author makes some interesting assumptions on social networking, communication, as well as some great ideas for a space faring humankind future (The unironic use of emojis mid sentence or as punctuation, as another reviewer has stated, is odd at times but generally feels right with the setting). I feel the author also did a great job filling out the world the story takes place in: you'll have yourself wondering about your own theories regarding cerrain conspiracies or other happenings, perhaps even taking sides on issues brought up.
However, this title severely lacks in the lead character department. Elfrida Goto, our main heroine, is merely just along for the ride for most of the three novels (she gets a bit more action in the second novel, my preferred one of the three) and does nothing of no real importance until the plot seems to demand her to do something. Otherwise, she just lollygags about from one plotpoint to the other as just a mere vehicle to tell the story.
While this isn't necessarily a bad thing, I as the audience just feel a disconnect as I would want the lead to take some kind of initiative or to be in the wrong place at the wrong time. Instead I often have to wait until the end for her to make any meaningful contribution to the plot. Which is terribly wasted potential, as the world set up in the trilogy is already worth expanding on in many areas; Elfrida just doesn't do much to expand on that world.

The author's story line is OK, but his language was horrible. He uses sex like a weapon. It was not to my taste.