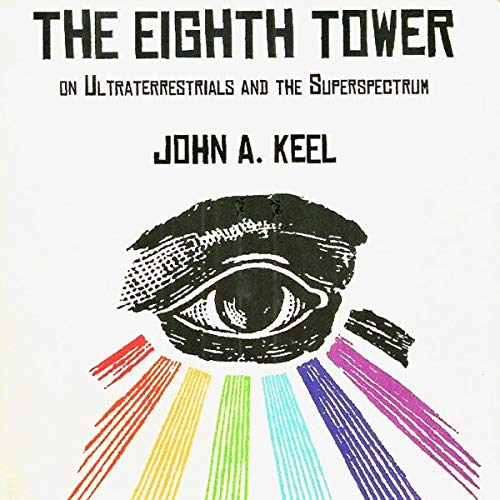 On Ultraterrestrials and the Superspectrum
By: John A. Keel
Narrated by: Michael Hacker
Length: 9 hrs and 23 mins
Categories: Non-fiction, Unexplained Phenomena
5 out of 5 stars 5.0 (1 rating)

By: John A. Keel
Narrated by: Michael Hacker

Is there a single intelligent force behind all religious, occult, and UFO phenomena?

Strange manifestations have haunted humans since prehistoric times. Beams of light, voices from the heavens, the "little people", gods and devils, ghosts and monsters, and UFOs have all had a prominent place in our history and legends. In this dark work, John Keel explores these phenomena, and in doing so, reveals the shocking truth about our present position and future destiny in the cosmic scheme of things.

Are we pawns in a celestial game?

In the Orient, there is a story told of the seven towers. These citadels, well hidden from mankind, are occupied by groups of Satanists who are chanting the world to ruin. Perhaps this is just a story; perhaps there is some truth behind it. But what if there is yet another tower, a tower not of good or evil but of infinite power? What if all our destinies are controlled by this cosmic force for its own mysterious purposes? And what if UFOs and other paranormal manifestations are merely tools being used to manipulate us and guide us toward the cosmic role we are fated to play? Perhaps, after all, we are not independent beings but are instead the creations and slaves of the eighth tower.

I enjoyed the book in fits and starts. Overall the concepts and theories were compelling up to a point. It jumped between conjecture and testimony, which made it difficult to follow at times. It explained a lot felt like it had many gaps in his suppositions. As far as aesthetics, the narrator used too many funny voices.

Sarcastic and sardonic, Keel berates ufologists, religious nuts, and all manner of believers in favor for his his theories about the super spectrum. He’s views on the future are strikingly accurate in some regards, but still he’s theories about humans being biological robots offer something just as ridiculous and outrageous as little green men and big foot. I like the devil theory angle, but I waffle at his determinist ideas about human existence.

There is something SINISTER about Michael Hacker’s voice. I found it difficult to separate Mr. Keel’s viewpoint and intentions for this book (generally a skeptical take on religious and UFO mythologies meant to encourage people to be wary of getting too deep into phenomena that are (still) not well understood) from Mr. Hacker’s sneering and paranoid tone. His is a compelling voice and commands attention but it just felt mismatched to the nature of the text.

That being said, highly recommended for fans of the paranormal, historians of American religion and the occult, etc.

Don't let it offend your beliefs

It is interesting to note how old this book is. Toward the end of the book, it did cause me a little distress because the book has made assertions that seem to contradict assertions in prior chapters. Suffice to say, you must understand what the author is attempting to do here. Then you will see it is not intending to offend your sensibilities and understanding of the world. It may seem a bit preachy and I am being kind. Truth is with another narrator the result might have been different. Remember, listening to audio books confronts your own inner voice you have when reading anything, so a voice that comes at you differently can be offensive and crude. After listening, it ended as I expected and I was not disappointed. After listening to many and reading far more on UFO's, ancient cultures and ultra-terrestrials, this book was a good addition to that list, but this is NOT the first book I would recommend on the subject. I would say however, that this book is a great way to END research on the topic(s).

Poor predictions from the 70's

A lot of strong opinions that didn't pan out. Very little worth gleaning here today.

Read/listen to something else

The are a lot of claims the author poses as “fact,” but are mere conjecture. There is no support for his claims nor details to at least provide background.
The book honestly gave me a headache - to which honestly I can’t say definitively whether it was the narrator or the content in the book itself. I love books that cover this type of stuff, but this one disappointed me heavily.

Funhouse mirrors of conjecture without a strong support of thesis. More disnfo then info.

this book is not based on fact at all.

so I welcome healthy skepticism however anyone stating that Jesus Christ never existed because of a lack of documentation amongst many other false claims stated in this book has not done their homework. definitely a biased perspective from a closed mind. what a disappointment!