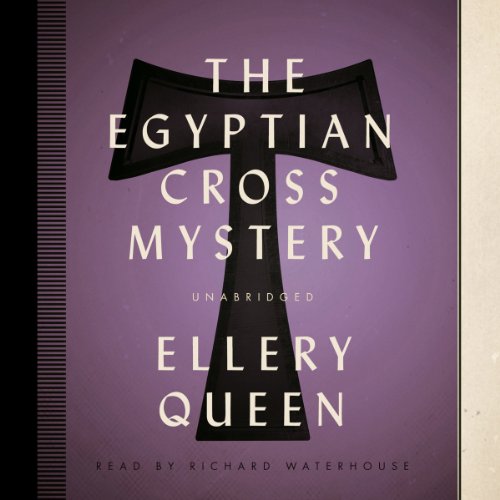 The Queens are intrigued when a grisly murder mars a small town's Christmas.

It's Christmas in Chicago, and Detective Richard Queen is enjoying a busman's holiday at a conference on gangland violence - but his son, amateur sleuth Ellery, is bored silly. Until, that is, Ellery reads of an unusual killing in rural Arroyo, West Virginia. A schoolmaster has been found beheaded and crucified. Ellery hustles his father into his roadster and heads east, since there is nothing he'd like better for Christmas than a juicy, gruesome puzzle.

When the Queens arrive in Arroyo, they learn that the victim was an eccentric atheist, but not the sort to make enemies. What initially looks to be the work of a sadistic cult turns out to be something far more sinister. In the months ahead, more victims will turn up all over the world - all killed in the same horrifying manner. It will take several bodies before Ellery divines the clue that unlocks the mystery of the Christmas crucifixion.

What listeners say about The Egyptian Cross Mystery

Long and winding - but not suspenseful

I always love the Queens and their cast of peculiar characters but this one (true to life perhaps but bad for fiction) went nowhere forever. Hard to convey the author's frustration and perplexity without confounding the reader who has much less dedication. On the up side, I had plenty of time and tedium to pick out clues and rethink the facts, throw away buckets of herrings, and was still surprised by the ending.

an adequate entry in the series

It's an all right story but plays too fast & cute with the business with the story title. Other than the story title it was a fine mystery. You can see why they got away from the beginning title gadget McGuffin.

Compared to the previous four books, I found The Egyptian Cross Mystery to be more convoluted and less satisfying. While there were the usual Ellery touches, the final plot seemed rather contrived and padded. I won't post any spoilers, just that it wasn't bad, but it wasn't as good as the previous books. The narration was very good and pleasant to listen to.

how come this says optional, if required?

Quirky, intricate, just enough horror. (I think I put it succuntly enough not to need 20 words!)

Some books keep me awake at night. This old war horse with its mechanical, grade school narration had the reverse effect. It is the cure for insomnia.

The story was long but had plenty of twists and turns. Like getting all the clues!

Very Bloody for an Ellery Queen

The Ellery Queen stories are getting more gorey as the series goes on. Some of the "conclusions" drawn from the evidence are a little thin. Overall, it still had a nice way of twisting and turning at the very end.