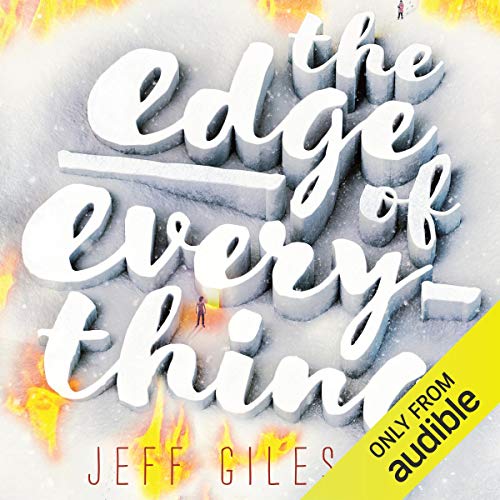 The Edge of Everything

Every day Zoe struggles to keep going. The cruel winter took her father's life and left her angry and broken-hearted. As she carries her little brother through a snowstorm that could kill him in minutes, her only thought is finding shelter. The cabin beyond the woods is far from the place of safety she hoped it would be, but it is there that she meets a man whose muscular body marked with strange and primitive tattoos hints at an extraordinary story. He has the power to light up the lake, and with it Zoe's world.

Zoe calls the stranger X. He is a bounty hunter, tormented by the evils of his victims that course through his veins. X has never felt anything but hate, until he meets Zoe. She shows him what his heart is really for, and if they can find a way to be together, just maybe his pain can help Zoe forget her own.

This high-stakes, heart-pounding romance will leave the listener breathless for this breakout new series and its sequel.

"Giles beautifully captures the breathless, visceral, and instant attraction between Zoe and X.... A rich and satisfying read on multiple levels." ( Booklist)

What listeners say about The Edge of Everything

a meh type of story.

not really a memorable story. good read if bored. aimed at young girls more than anything with the sappy love story. the brother was more annoying than anything. the story said the kid had adhd but acted like he had mild autism.

I completely loved this book. Zoe and X are both strong characters and I love their interactions. The plot is a bit predictable. But I didn't care. The audio narration was well done, with each of the characters having a distinct voice. Plus some nerdy humor. And a satisfying ending with a cliff-hanger that has me wanted the second book right now!
4.5 Stars.

The Edge of Bored to Tears

What was most disappointing about Jeff Giles’s story?

This book is Twilight's younger, less adorable brother. If you want insta-love, a discount Edward Cullens (but with the same amount of brooding), and a slow descent into a could-have-been amazing story, this book is for you.

YES! She was so monotone, I found myself zoning out.