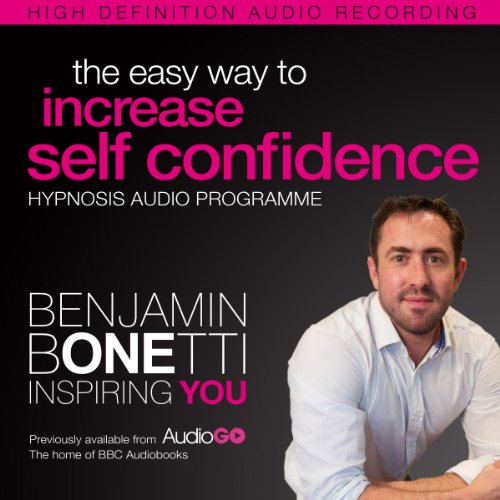 The Easy Way to Increase Self Confidence with Hypnosis

This download offers an easy way to unlock feelings of self-assurance, enabling you to be strong, assertive and poised in any situation. Benjamin Bonetti is one of the world's bestselling hypnotherapists. His advanced hypnotic technique sends positive messages to your subconscious so you can accomplish your goals. Powerful affirmations and visualizations encourage change to happen naturally. Through hypnosis, you can release negative emotions and develop a life of positivity and wellbeing. Relax, listen, and discover a new, confident you.

Now Includes: Increase Self Confidence with Hypnosis Audio and a complimentary PDF Chapter of Benjamin’s 2013 Bestselling Book How To Change Your Life.

About Benjamin: Using the three pillars of success, Benjamin Bonetti, bestselling self-help author and hypnotherapist, helps people, through fitness, well-being and nutrition, become a better version of themselves. Benjamin’s no-nonsense and practical advice has been regarded as refreshing and inspiring within the arena of self –development.

He utilises hypnosis and Neuro-linguistic Programming to change thinking patterns and inspires others to take massive action, through a number of tools designed to change the mind-set.

Ex Military - Benjamin has appeared in a number of magazines, radio and TV features as the “Celebrity Secret Weapon”, including; The Sun, BBC Radio, Metro Magazine, The Irish Times, Friday Magazine, Bookish, HR Grapevine, Diets In Shape, Slim At Home, Decision Business Magazine, The Gulf News, The Best You, Celebrity Wife Swap, Latest 7 Magazine and is the “preferred” A-List Coach for International Celebrities.

Some of Benjamin’s sessions repeated themselves, not this one! I love how thorough and positive this recording is. I would pair this with Abraham Hicks manifestation techniques. These recordings have helped my anxiety to go down tremendously! The world would be a better place if we all went to bed listening to this. Thank you Benjamin Bonetti!

I always feel better after I listen to this. His voice is very soothing. I don't know what the actual content of this audio book says because it puts me to sleep so quickly.