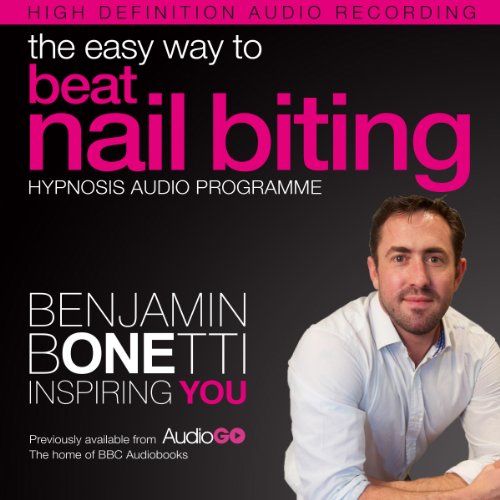 The Easy Way to Beat Nail Biting with Hypnosis

"After having enough of my husband biting his nails for the last 10 years I managed to convince him to have a go at Hypnosis! After just 2 weeks he has completely stopped, thank you Mr Bonetti you have made a real difference to his life."

Relax, control anxiety, and develop the confidence to put nail biting behind you with the help of this download. Benjamin Bonetti is one of the world's bestselling hypnotherapists. His advanced hypnotic technique sends positive messages to your subconscious so you can accomplish your goals. Powerful affirmations and visualisations encourage change to happen naturally. Through hypnosis, learn to let go of negative habits, and develop stronger, more beautiful nails.

Now Includes: Beat Nail Biting with Hypnosis Audio and a complimentary PDF Chapter of Benjamin’s 2013 Bestselling Book How To Change Your Life.

About Benjamin: Using the three pillars of success, Benjamin Bonetti, bestselling self-help author and hypnotherapist, helps people, through fitness, well-being and nutrition, become a better version of themselves. Benjamin’s no-nonsense and practical advice has been regarded as refreshing and inspiring within the arena of self –development.

He utilises hypnosis and Neuro-linguistic Programming to change thinking patterns and inspires others to take massive action, through a number of tools designed to change the mind-set.Recommended Weight Loss Audio for 2014 by the Metro Magazine.

This is a game changer. Not only does this title send me to sleep quickly but I have drastically reduced my nail biting, particularly in response to stressful situations. Highly recommend as a first step towards eradicating nail biting and unsightly hands.

It helped me a lot.

I’m struggling with nail biting for as long as I can remember, and this audiobook helped me a lot to get over it. Of course, you need to listening frequently. It’s been approximately 4 months now, no big willingness to biting. Today I have to listening to it just once a week or twice a month. Thanks!