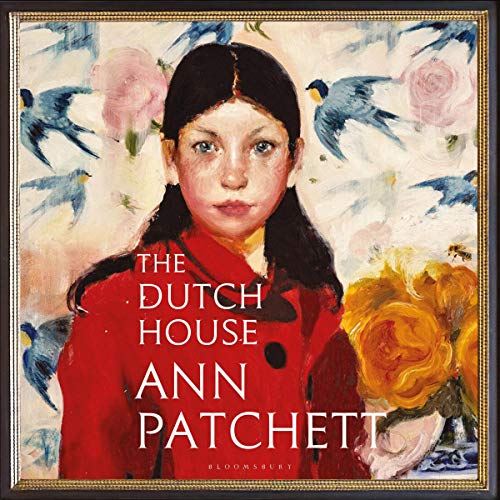 Bloomsbury presents the audiobook edition of The Dutch House by Ann Patchett, read by Tom Hanks.

An unforgettably powerful new novel of the indelible bond between two siblings, the house of their childhood and a past that will not let them go - from the number one New York Times best-selling author of Commonwealth and Bel Canto.

'Do you think it’s possible to ever see the past as it actually was?’ I asked my sister. We were sitting in her car, parked in front of the Dutch House in the broad daylight of early summer.

Danny Conroy grows up in the Dutch House, a lavish mansion. Though his father is distant and his mother is absent, Danny has his beloved sister Maeve: Maeve, with her wall of black hair, her wit, her brilliance. Life is coherent, played out under the watchful eyes of the house’s former owners in the frames of their oil paintings. Then one day their father brings Andrea home.

Though they cannot know it, her arrival to the Dutch House sows the seed of the defining loss of Danny and Maeve’s lives. The siblings are drawn back time and again to the place they can never enter, knocking in vain on the locked door of the past. For behind the mystery of their own exile is that of their mother’s: an absence more powerful than any presence they have known.

Told with Ann Patchett’s inimitable blend of humour, rage and heartbreak, The Dutch House is a dark fairy tale and story of a paradise lost; of the powerful bonds of place and time that magnetise and repel us for our whole lives.

"The book of the autumn. The American author of Commonwealth (brilliant) and Bel Canto (even better) releases perhaps her finest novel yet." (Sunday Times)

"The buzz around The Dutch House is totally justified. Her best yet, which is saying something." (John Boyne)

I thoroughly enjoyed the intelligence and wit of these siblings. Beautifully written and narrated. Really worth a read

Tom Hanks voice just brings something so special to the narration. What a beautiful told by a fabulous voice. Thoroughly enjoyed this.

in the end I loved this book. first I found it hard to engage. the main character was not easy to approach and the back and forth in time made it hard to keep track. even though Tom Hanks read the story nicely, it is a book I should have read myself, to have better access to characters and plot.

Not sure what the story is?

It had a beginning, a middle and end of sorts, but if you ask me for one line on what this story is.....I couldn't really say, it just meanders like a stream. Listening to Tom Hank's voice was probably my favourite part of this audio book.

A special book by an author with perfect command of her craft, her narrative, her characters and the magic she spins.
Just loved everything about the journey.

The story by Ann Patchett was perfect, and equal if not better than previously written books. It was bittersweet and full of love and longing. The narration and performance by Tom Hanks was full of drama, emotion and wry humour. Thank you, both of you, for this truly amazing experience.

This was such a beautifully written novel, beautifully read and produced. An unexpected and marvellous gift of a story.

Superb performance by Tom Hanks, read like a play!

I loved every minute of The Dutch House. Engaged from the get-go and Tom Hanks was the perfect choice to narrate! I could not put it down. The poetic details and observatories, the rivalry of characters and the Dutch house itself. Every chapter weaves through Danny’s and his sister Maeve’s memoirs, questioning a nostalgic picture of their family dynasty. A compelling story, pleasurable listening with great humour. I highly recommend it.

Everything about this book is brilliant - the story, the characters, the narrator (Tom Hanks is sooo good!). Loved listening to this one, it had me alternately laughing and crying. Highly recommend!!!

I can’t recommend this enough- a beautiful story read with such understanding of each character . Tom Hanks takes us into the world of the Conways and I was so sad when it ended . What a treat that was .

Comfortable Angst of The Bourgeoisie

Tom Hanks' reading makes this listen very compelling, and for the first two thirds of the book I was completely drawn in, enjoying the meandering explorations of family dynamics and memories, but by the last third I found myself not caring about any of the characters; it's just all so comfortable, even the tragedies feel comfortable and glossed over, as if nothing is at stake. Not completely satisfying novel,

Fabulous book, skillfully read by Tom Hanks. Our ears are in great hands with such an experienced actor.

A novel in which no more than life unfolds, and I was completely hooked from beginning to end. Tom Hanks’s performance is thoughtful and subtle, and the book is just magnificent. I highly recommend this.

The Ditch house was a wonderful family saga that was funny, sad and full of insights about family relationships. Beautifully read by Tom Hanks who showed a deep understanding of the characters he spoke about and for. Thoroughly enjoyed this thoughtful story.

A masterpiece of words and audio

What a beautiful book, written masterfully by Ann Patchett and read with exquisite nuances by Tom Hanks. An unusual story full of wonderful characters, touchingly and poignantly brought to life by the reader, a truly beautiful book. It deserves 5 stars from top to bottom. I will listen to it again and again.

A wonderful journey of how life can twist and turn. I would love to be able to go through this house as it is described so beautifully. I struggled as a mum to come to terms of some of the events and the impact it would and could have on young children and how these choices follow through a life time. WONDERFUL narration.

I wanted to fall in love with this book but I just didn't. There are some beautiful descriptions in places, and interesting observations, but they are not enough to carry the story. In terms of narration, Tom Hanks does a good job most of the time, yet on occasions his tone of voice and inflection is bizarre and leaves you feeling: did he really mean to say it like that? Surely not. I think one day soon the trend for sprawling and underwhelming fiction will come to an abrupt end. People will realise the Emporer has no clothes on, but that day has not arrived yet! The Dutch House kind of feels like a pastiche of The Goldfinch and A Little Life. I recommend you read it if only for the description of Andrea standing in front of the fireplace, because that is brilliant.

Lyrical analysis of the effect the substitution of a mother with a glorious art- museum-like home on a morally brave boy and girl, left to the mercy of their impenetrable father and avaricious step mother. The waves of cause and effect wash over the psyches of the pair throughout their lives affecting every nook and crany of their behaviour, attitudes and family life. Extremely beautiful and loving portrait of their unbreakable sibling bond and the invisible umbilical chord calling them back to the house inexplicably and repeatedly in search of their lost childhood.

This is such a beautiful book about life.....its simplicity and its intricacies.
I loved it and it was beautifully read by Tom Hanks

Story just rolls along, utterly glorious writing. Love Ann Patchett and loved the reading by Tom Hanks, just could have let it carry on and on!

I found this story difficult to keep track on. The narration was excellent and that kept me going till the end. The characters annoyed me which didn't help my enjoyment. I would not recommend this book.

A poignant tale of family dynamics ,loss and recrimination.
I never failed to feel for the children that were Maeve and Danny even when they were adults .
This book held me in its sway completely .
What a joy to have Tom Hanks whispering in your ear at bedtime !

Can you forgive her?

As a good novel should, The Dutch House, Anne Patchett's first novel for 3 years, keeps you thinking once it has finished. It could even benefit from a second listening to pick up all the nuanced clues evident from the start, the significance of which is appreciated only towards the end.

The Dutch House itself is in some ways the main character. The massive 1920s villa with its marble Vermeer-like checked floors, vast rooms, Delft decorations and vast rooms is acquired by Cyril Conroy in 1946 when the Dutch owners go bankrupt leaving behind the house, crammed with its treasures. By the end of the novel, generations have grown, and the hosue remains as powerful as ever.

Brimming with pride, Cyril displays the mansion to his new wife, Elna. She hates it, can't bear the willing house servants, the children's nanny, the opulence of it. Apparently saintly and ascetic, she abandons her children, Danny and his adored elder sister Maeve to devote herself to serving the poor in India.The children believe she is dead.

Cyril brings a woman into the household: Andrea, an avaricious young woman who, like Cyril, dislikes children. Cyril marries her, not because he loves her, but because she 'lingered like a virus' and he hadn't the strength to get rid of her. As the subsequent complex sagas of Danny and Maeve unfold in multi-layered realism, the fairy tale elements become more obvious: the wicked stepmother; the forbidding house of mysteries; a lost mother. Other themes are also explored, most importantly the complex contradictory quality of sainthood (why are saints never saints to their families?), and of the possibiloty of restoration and forgiveness.

The ending takes the fairy tale element too far, I think - just too neat and unlikely - the realism suddenly vanishes. But overall this is a satisfyingly deep excursion into the adult life-paths of children blighted by the mis-judgements and errors of others.

The story is told by Danny Conroy and Tom Hanks makes a very good, convincing job of sounding wholly. real.

If you're looking for the perfect listen on audible this is it. A family drama following the lives of brother and sister Danny and Mauve, The Dutch House is an interesting tale that'll keep you hooked. The pace of the story is just right, the main characters are likeable and throughout I wanted to know what would happen next for them. I'd definitely recommend The Dutch House as a good read generally, but Tom Hanks is an absolutely outstanding narrator so definitely get the audible copy if you can. I wanted to return and listen again and again, he really does make it for me. It's my favourite book on audible - high praise indeed!

What a beautiful book!

I didn’t want it to finish, not sure if Tom Hanks narration added to this listen or made it!
Going to miss the characters, loved it!

Another cracking novel from Ann Patchett. Excellent narration from Tom Hanks, captivating, couldn't get enough of it.