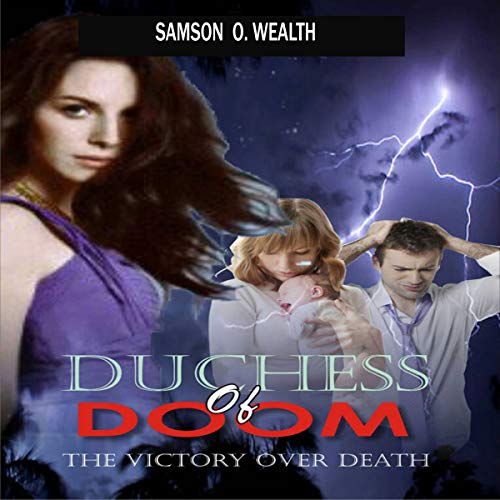 The Duchess of Doom

As a young, successful businesswoman, Katrina eventually fell in love with Marcus Peterson, an accountant in one of the well-established companies in Mexico. Their love reached the moon, and they decided to tie the knot and finally get married.

After three years of blissful wedlock, Katrina finally gave birth to a child. It was a bouncing baby boy. But something devastating happened: The child died mysteriously on his first birthday. This was the beginning of a different life for the Petersons.

After the loss of her first son, Katrina suspected everyone around her, excluding Marcus. She had known Marcus to be a loving and caring husbands for years. He is too good to have a hand in the mysterious death of their son.

But Katrina made up her mind to relocate out of Mexico to the US to give birth to her second child. She must ensure this one lives to see the day, even if it means leaving Marcus behind. Her hunters can't get her in the US; she’s too far away from their grip (she thought).

Little did she know that the powers trailing her can't be restricted by changing locations.

Just like prey, Katrina was hunted at every side. Her enemies were bent on making her life a living hell. Who is stalking her? No one could tell. And who is going to save her family from this mysterious disaster?

Find out more in this audiobook.

About the author: Samson O. Wealth is a passionate and creative Christian writer and also the outreach coordinator of Christian Corps Fellowship Int. He writes short stories about regular people in extraordinary situations and aims to let the world know through his writing that there is more to the spiritual world than the physical.

His writing unveils deep secrets and plans of the devil against humanity. He is also the author of other Christian books that revealed deep mysteries of how to efficiently run the Christian race and live righteously, even in this very end time.

What listeners say about The Duchess of Doom