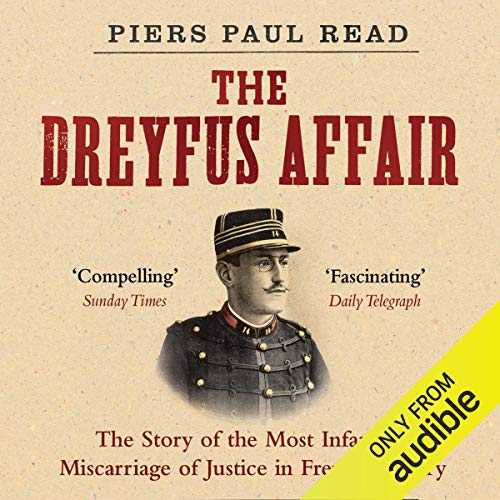 July 20, 1894: The German Military Attache in Paris, Colonel Maximillien von Schwarzkoppen received a visit from a seedy-looking middle-aged Frenchman who would not give his name. He told Schwarzkoppen that he was a French army officer serving on the General Staff; that he was in desperate need of money; and was therefore prepared to sell military secrets to the Germans.

Captain Alfred Dreyfus, then aged 35, was a high-flying career artillery officer. Shy, reserved, sometimes awkward, but intelligent and ambitious, Dreyfus had everything he might have hoped for: a wife, two enchanting children, plenty of money, and a post on the General Staff. However, Dreyfus' rise in the army had not made him friends. Many of them came from the impoverished Catholic aristocracy and disliked Dreyfus because he was rich, bourgeois and, above all, a Jew.

On October 13, Captain Dreyfus was summoned by the General de Boisdeffre to the Ministry of War. Despite minimal evidence against him he was placed under arrest for the crime of high treason. Not long afterward Dreyfus was incarcerated on Devil's Island.

But how did an innocent man come to be convicted? And why was he kept locked up for so long?

The Dreyfus Affair uniquely combines a fast-moving mystery story with a snapshot of France at a moment of great social flux and cultural richness - the Belle Epoque, the Impressionists, novelists such as Flaubert, Zola, the Goncourts, Proust. It is a key to an understanding of later history; the Holocaust and Zionism: the virulent anti-Semitism of the anti-Dreyfusards and the decision that the Jews must have a state of their own.

What listeners say about The Dreyfus Affair

Gripping look at an important moment in history

This was a very interesting and in-depth look at the Dreyfus Affair. The author explains in detail the historical, social and political context in which the event took place. The roots of the affair trace back to the schism between the traditionalists and secularists in the French Revolution, and Dreyfus became a pawn between these competing forces. Very balanced in presenting the thoughts and motives of those on both sides of the issue, and very moving in describing Dreyfus's imprisonment. A fascinating look at how an injustice could both be perpetrated by those with noble motives and how decisions become self-perpetuating.

Interesting history, but as dry as the Sahara

I've heard a bit about the Dreyfus Affair but never really had a chance to study it in depth. So I decided to gamble a credit on this offering.

The background and context (history of Antisemitism in France, French history after Napoleon) and the background were useful but long and perhaps could have been shortened somewhat. The actual story (Dreyfus' situation, his arrest, the evidence against him, the periodic debates over Dreyfus, how Esterhazy was unmasked and the aftermath) is interesting, but every so often gets broken up with long-winded background material.

I think the writing could be better (maybe a few edits to trim about 10% would liven things up, and maybe a little less scholarly in tone) but the real problem with this book is the narration. David Pevenser is a plodding, slow-pace reader who sounds like he's expecting the listener to be taking notes. I changed the playback speed to 1.25x on my Audible app for some of it, and it improved. Also, I'm not an expert in French, but I suspect his accent is less "Left Bank" and more "US High School."

In summary: Not loving it and definitely not good with the narration.

I was unable to get past the second chapter--Mr. Pevsner is a very stilted reader of English, and he completely butchers the French language. The combination of these two issues led me to return the audio book and buy a print copy, because I really want to read this book!

Breathtaking story, both from the human and the historical perspective. Some listeners complained about the narration; it didn't bother me so much. It is slow, but I played it at x1.2 speed and it was fine. The French pronunciation apparently isn't great, but if you don't speak French I guess you can't tell. The story is very detailed, I had to listen twice to get all the different characters and their roles. But it was not boring for a moment.

Addresses us as though we were a public meeting

Maybe, if you can stand being read to in the pompous, ponderous, portentous manner of this narrator.

Don't know. Couldn't get beyond Chapter 1.

Tone down the narrator or choose someone different.

Was The Dreyfus Affair worth the listening time?

Not for me. And it was expensive, too.

A story surprisingly relevant in our times.

The parallels between the conspiracies of then and now are unnerving. Je suis un Dreyfusard!

Its a very important story with lots of twists and turns over a period of many years. Sometimes I found myself getting bored with the intricacies but there's no doubt as to the significance of the events it covers.

Dreyfus has to be the character one has most sympathy for

Yes. I found the pronunciation of the French names extremely annoying. If you are going to have an American voice please ensure they can pronounce the locations and names correctly.

Did The Dreyfus Affair inspire you to do anything?

Yes. read more books about the period in French history

Had hoped to be able to hang on long enough to get an impression of the writer’s take on Dreyfus. Far too much explanation of why French Catholics might have been touchy, from the Revolution on; even though French Protestants had already been massacred or had fled abroad, with significant damage to the economy.
I can’t tolerate any longer the narrator’s bored, flat voice or his utter refusal to pronounce French names in any recognisable form.