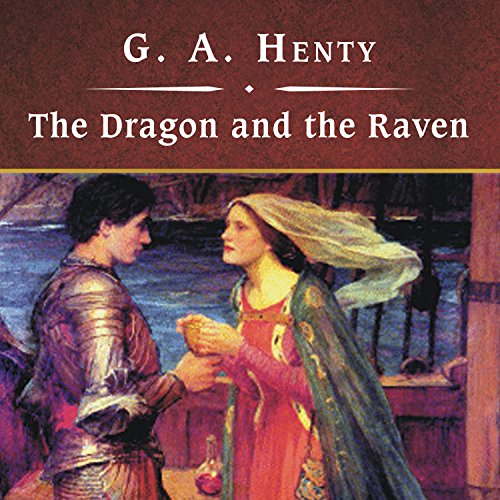 The Dragon and the Raven

Master of adventure G. A. Henty enraptures and enchants with this chronicle of Thane Edmund’s daring defense of king and country against the Danish conquest. Set in the ninth-century English kingdom of Wessex, The Dragon and the Raven follows Edmund, a soldier, strategist, and trusted consort to King Alfred, as he chases the savage usurpers from his homeland and across the European continent. Performer John Bolen’s granular but fluid baritone perfectly captures the battle-cry bellows of Henty’s rugged warrior. Edmund enlists a unit of brave soldiers with whom he sets forth into the heart of Danish territory aboard his sturdy ship, the Dragon. Employing death-defying hit-and-run tactics, Edmund courts fame, fortune, and romance.

In a time of chaos and Viking onslaught, Alfred the untested Saxon king must fight to save his ravished land. The tale unfurls through the eyes of a young thane, Edmond, who becomes Alfred's friend and mightiest warrior. When Danes over run the land and the Saxons capitulate, this young knight trains and leads a devoted corps of pike-men to recapture the kingdom.

On his adventures Edmond is captured by the Pagan Danes, raises the siege of Paris, meets the Pope and still finds time to fall in love. Henty successfully weaves this plot of intrigue and suspense into the fabric of true history.

What listeners say about The Dragon and the Raven

I was eager to listen to this book, as Henty seemed a fascinating and perhaps unjustly forgotten author. However, the reader, John Bolen, who reads most of the books from Tantor Media, is a very, very poor reader. Leaden, wooden, ponderous. Feeble attempts to do accents. His attempts at differentiating characters are often down right silly. So, I have abandoned this book, as I have other books he has read, like The Yellow Claw, the Sea Hawk, The Black Tulip. This is especially frustrating, as Tantor has one of the more interesting catalogs of relatively obscure classic fiction.

My advice: Stay away from anything read by John Bolen.

I was fascinated by the history in this book as little is written (in fiction) on this subject. But the reading was extremely weird. The characters were these warrior and viking types and they all sounded like sissies! I think I would have enjoyed this book a lot more if the reader was better.

I should have listened and not listened

There have only been three audiobooks that I've failed to complete out of over 200 titles, so it's not like I'm picky, but the narration of this book is so poor that I couldn't get through the first chapter. One of the other reviewers warned us, but I thought that the sample wasn't intolerable and I wanted to hear the story. Unfortunately, I should have listened to the other reviewer and saved myself the price of this book. It would have been better listening to a machine read it because then we wouldn't have had to hear the narrator's abysmal attempt at accents and voicing different characters. Please, before you disregard this review, ask yourself if you can stand listening to seven hours of his voice and then choose wisely.

I love Henty. My 13-year-old XBox-360-fanatic loves Henty, and that's saying something! HOWEVER, that said, I must agree that the narrator could have been better chosen.

This was another great adventure by Henty. I had a hard time stopping the story. The history was also very interesting. I did need to look at a map to better picture the different location.

I thought this was a very good book if you are interested in this period of history. It's a good look inside the life and times of the early British kingdoms, and their battles and adventures with the Vikings

I have enjoyed this story but this particular rendition by Bolen, while better than the other offered by Audible, is not great. I find his rendition of a Danish accent annoying and distracting.

One of my favorite historical fiction books of all time!!!👍🏻👍🏻👍🏻

This book is amazing! The voice of John Bolen is pure gold. If you like griping adventure and stirring romance and friendship this is the book for you.👌👌👌

I love G. A. Henty's books. His books are filled with accurate historical knowledge along with fiction to make it interesting. I have a really hard time with the narrator John Boland. I can't stand his accents and the rhythm of his diction but Henty's authorship shines through anyway.

My ten yo liked the characters, but complained to me all the time about the narrating! Finally I listened to it with him and I must say that I have to agree with him.