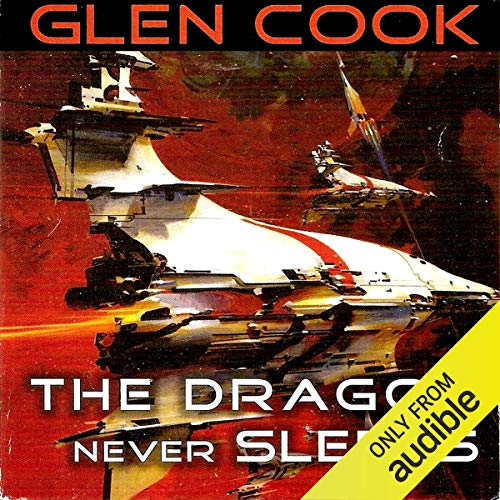 For four thousand years, the Guardships have ruled Canon Space - immortal ships with an immortal crew, dealing swiftly and harshly with any mercantile houses or alien races that threaten the status quo.But now the House Tregesser has an edge: a force from outside Canon Space offers them the resources to throw off Guardship rule. This precipitates an avalanche of unexpected outcomes, including the emergence of Kez Maefele, one of the few remaining generals of the Ku Warrior race-the only race to ever seriously threaten Guardship hegemony. Kez Maefele and a motley group of aliens, biological constructs, an scheming aristocrats find themselves at the center of the conflict. Maefele must chose which side he will support: the Guardships, who defeated and destroyed his race, or the unknown forces outside Canon Space that promise more death and destruction.

If you could sum up The Dragon Never Sleeps in three words, what would they be?

I couldn't stop listening to it.

this is a book that doesn't leave you with an "average feeling". you hate it or you are fascinated by it. This is a very interesting and complex world Glen Cook knows how to build. Everything is in different shades of color and has its own reasons for acting. Plus this is a self contained structured story : a beginning and an end that goes with it. .
The read gives it more depth as it had the power of the voice. I seldom comment on books but really this read is outstanding.

I think this is the single most complicated book I've ever read. On the third reading I might catch most everything. I will do that in a couple years. The first time I read this book was two years ago.

This book was a great big disappointment, Story line very confusing, Mr.Cooper's narration was good. but the material he had to read was,well lets just say. I was lost within 5 minutes.

The Narrator made this story too difficult to follow. I should have tried a sample first. Mostly, Cook writes a good story, however, with this presentation who could tell.

This is a very interesting world and it is a pity it is a stand alone. I enjoyed the story and the rich universe Cook created. The narration is another matter. I do not know what would make anyone think overly heavy accents (and not good ones at that) would be a good idea. If you can stand it this book is worth the listen. If I had it to do over I'd have bought the paper version.