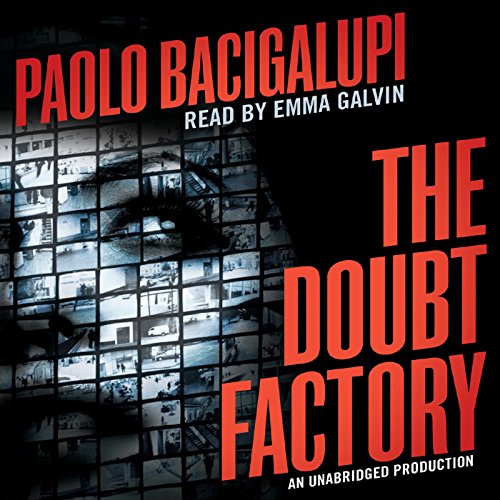 In this contemporary thriller, National Book Award Finalist and New York Times best-selling author Paolo Bacigalupi explores the timely issue of how public information is distorted for monetary gain, and how those who exploit it must be stopped.

Everything Alix knows about her life is a lie. At least that's what a mysterious young man who's stalking her keeps saying. But then she begins investigating the disturbing claims he makes against her father. Could her dad really be at the helm of a firm that distorts the truth and covers up wrongdoing by hugely profitable corporations that have allowed innocent victims to die? Is it possible that her father is the bad guy, and that the undeniably alluring criminal who calls himself Moses - and his radical band of teen activists - is right? Alix has to make a choice, and time is running out, but can she truly risk everything and blow the whistle on the man who loves her and raised her?

What listeners say about The Doubt Factory

This is an adult-themed novel despite speaking through the perspective of a teenage character. The author speaks truth to power through the vehicle of fiction. A good and thought-provoking listen.

Good story but a little predictable. I chose the book because of the author; not the story line. Check out his other works.

lame story. usually great author, would recommend other books. this one is not worth reading

After really enjoying The Water Knife, The Doubt Factory was a major disappointment- slow and strident at the same time, and very frustrating. The frustration came because the story was predictable yet very slow in getting around to telling the reader what the reader figured out pages - chapters - earlier.

Endless, numbing, moralizing passages that finally made me give up 6 hours in and start skipping forward. Hoped it was just a portion of the book but it wasn’t. Big fan of the author, but this was a weak, predictable work that isn’t worth the time.

The paranoia was distracting.

A factual account would be more interesting. This fictional account was just boring and predictable since the reader learns very quickly that companies are evil, will always be evil and never change. So every place that you expect possible plot twists just turns the same corner. Just being slightly more realistic, and acknowledging that sometimes there actually are cases of drug misuse and inappropriate off-label uses that result in injury and death, would be more interesting. BTW, not all pharma are multi-billion dollar companies either. There are some very small pharmaceutical companies who are damaged by the lawyers making false claims on the other side. There was slight mention of this, lawyers on both sides win big no matter what - evil?

The first couple of novels by Bacigalupi were okay, but this one is a teen novel for high school students. It doesn't help that it was set in a high school environment, and read by somebody who sounds like they're in high school, but I was expecting some sort of sci-fi literature or something, not a novel concerned with school cliques and family arguments around the dinner table.

I should've done my research and looked at other books which Emma Galvin had narrated, and I would have seen mostly teen books and romance novels. Though the thought of a Jewish teen narrating a romance novel is beyond me.

The first audiobook I ever finished was the Divergent series read by Emma Galvin, I loved it, so I went to buy other books she read.

I'm glad I did this. This book would have flown under my radar otherwise. It's an interesting Young Adult type of book that tells a very important story worth pondering.

love PGs stuff but this has a lot of redundant plot and reputation, particularly of emotional dialogue.