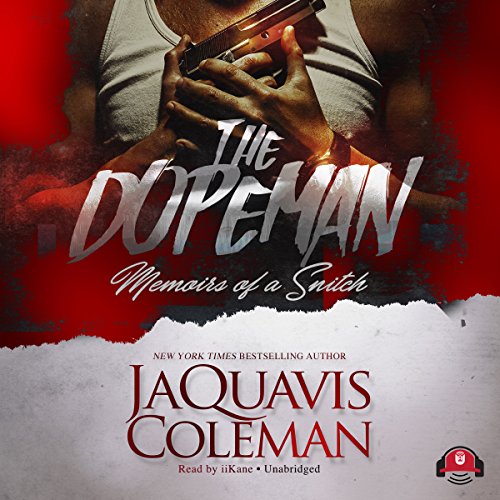 The Dopeman: Memoirs of a Snitch is a complex tale about the life and times of one the biggest drug traffickers the Midwest has ever seen.

In the summer of 2009, the FBI has launched an intricate plot to take down one of the most prolific drug organizations, and Seven Smith is their main target. Seven establishes a relationship with an up-and-coming hustler and takes him under his wing. But unbeknownst to Seven, his protégé works for the authorities.

The young hustler falls in love with a woman who is off-limits, and he has to make a difficult decision that puts many people's lives at risk.

Lola Banks is the daughter of a well-known hit man and street legend in Ohio. When she lays her eyes on the out-of-towner/snitch, it becomes a forbidden love. She is caught in a web of lies and deceit, only to learn the hurtful truth in the very end. This is a hustler's love story at its absolute finest.

What listeners say about The Dopeman

I love JaQuavis and his Wife Ashley!!!

This book is outstanding!. I love this writing duo together and separately. Definitely another banging book to add to my Ashley and JaQuavis collection. I have read all of them and not ONE disappoints. This one is at the top of my list now, along with Moth to a Flame by his wife:-) GOOD JOB!!!! Thank you for using this narrator. The last few books used Honey, and she is good but does not bring the stories to life like Nicole Small and iiKane.

Hands down a must read

Okay so when is Book 4 coming?

Good Book, Horrible Ending. Expecting a book 4, because that's no way to end a story! Moral of the story, "Always finish your breakfast & Never underestimate the power of a woman!"

I really hope the authors come out with a continuation of this story. it will be very unfair if they leave me hanging like this.

I love the plot twist. I love reading anything but the two of them. They never let me down.

all I have to say is please read the book! somebody needs to make a movie and I will be the first in the theatre!

Had me waiting for more to listen to more.

I needed more to read. Really enjoyed the trilogy ! I didn't want to leave my seat!

the narrative of this book is excellent. The plot and story flows will; a lot of surprises at the end- leaves you satisfied. Will listen to again

I haven't read a book I was displeased with.
Still catching up with the many books and stories. Love how they all tie in together some how.