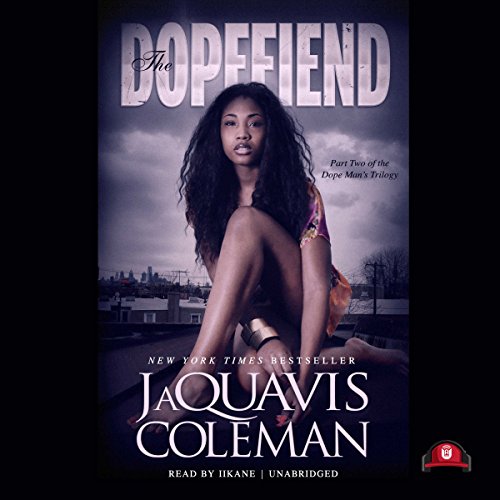 JaQuavis Coleman chillingly chronicles the life and crimes of Harlem resident Hazel Brown as she rises to the highest highs and spirals into an inevitable, devastating downfall.

Hazel has nothing and no one in her life; the only thing she "owns" is an insatiable addiction to heroin. Her addiction brings her to the slums, where she quickly learns the tricks of surviving - of hustling and getting her street smarts. She'll do anything to feed her habit, even if it means robbing and conning and selling her own body. Yet no matter how much heroin she does, the pain that has cut deep within her never goes away.

The Dopefiend is a story so intimate and compellingly written, you'll feel like you're walking in Hazel's shoes.

What listeners say about The Dopefiend

This author and narrator never disappoint. I like every book he has written and this one is no exception.

Although, was good, however, didn't like the time wasted listening to almost a chapter being repeated from Dopemans Wife

Wrong narrator for this book. It seemed to have potential but the narration made the book unbearable.

Damn this book was good!!

You know a book is good when you listen to it one day. Helps my work days move along faster

Ashley and Jaquavis are brilliant.

I am enjoying this trilogy, but I found myself rewinding several times due to iikane speaking so fast. I hate to knock her but she ruins stories with her speedy read game.

Not thrilled with performance

Too fast and lowering the speed down made it too slow. Reader wasn’t accurately placing the inflection on the wrong words and adding weird pauses. It was distracting

LOVED IT!!!!
This needs to be made for TV!
Maybe we'll get lucky!!
I'll be waiting,and so will you once you read this.

I loved it, didn't want to stop listening. Can't wait to read the next one.
only tho by is I think a man should've narrated.