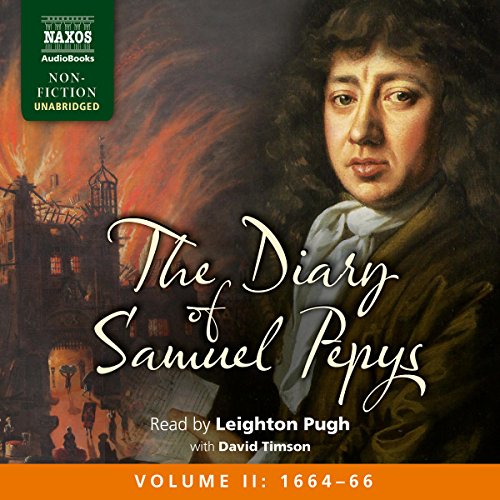 The Diary of Samuel Pepys

The Diary of Samuel Pepys is one of the most entertaining documents in English history. Written between 1660 and 1669, as Pepys was establishing himself as a key administrator in the naval office, it is an intimate portrait of life in seventeenth-century England, covering his professional and personal activities, including, famously, his love of music, theatre, food, and wine and his peccadilloes. This Naxos AudioBooks production is the world premiere recording of the diary in its entirety. It has been divided into three volumes. Volume II covers some of the most famous passages in the diary. Pepys was there, in London, during the terrible plague of 1665. And he was there during the Great Fire of London the following year, playing an active role in the actual event and the aftermath.

What listeners say about The Diary of Samuel Pepys

...but will esteem pleasure above all things

"...and God forgive me, I do still see that my nature is not to be quite conquered, but will esteem pleasure above all things; though, yet in the middle of it, it hath reluctantly after my business, which is neglected by my fallowing pleasure. However, music and women I cannot but give way to, whatever my business is."
- Samuel Pepys, Diary, 9 March 1966

The fifth volume (1664, with 132,000 words) contains such an amazing blend of those very human desires, human follies, and human wisdom that it keeps pulling me back volume after volume, day after day, page after page. There are times when I read about his multiple affairs with women, his fixation on money and status, that I think Pepys, while interesting, is just a son-of-a-bitch who would do well and fit in wherever he landed. However, his genuine curiosity, his integrity (minus the occasional small graft and dalliance with the ladies) reminds me that there is an actual heart beating in that social climber. He loves books, loves his job, loves food, loves theatre, and just happens to also like the occasional strange. Oh, and the year ended with a big comet, so next year might not end as well as this one.

1665 has been one of the most eventful years of Pepys' diary. He sees his fortune triple, due largely to multiple roles he is playing in the government (Treasurer of Tanger, Surveyor of the Victuals) in addition to his day job as Clerk of the Acts to the Navy Board. His skill and work ethic have earned him not just the attention and favor of Lord Sandwich, but also the Duke of Yorke and occasionally the King. This year the plague hits London hard. Those who can move their families out of the city. The Plague peaks during the Summer and begins to pull back as Winter freeze comes on.

Not much slows Pepys down, however, when it comes to the ladies. Sometimes I think the only reason Pepys learned basic French and Spanish was so he could write in code all the opportunities he takes to grope, fondle, kiss, and seduce the local wives and wenches. If there hasn't already been a PhD written on status, sex, and the mid-seventeenth century, Pepys' diary would be fertile ground for one.

Although the various episodes of Pepys behaving badly do spice the diary up, it isn't the reason I keep getting drawn further into this massive work. Pepys is a perfect cipher for the times. He unlocks so much about the enlightenment, the native curiosity of the times, the post Cromwell rationality and bureaucracy that starts to creep into government. Every pages seems to hold amazing tidbits.

Having survived and reported on the Great Plague of 1665, Pepys shows his luck and resilience by also surviving the Great Fire of London in 1666. Ironically, the biggest struggle facing England was not the Plague or the Fire, but the sad, vicious, and negligent Court. The dysfunction of government in England makes Pepys and others afraid that within a year they could see the ruin of the Kingdom within a year. Pepys' own fortunes, however, continue to grow, as does his groping of women (ça change, plus c'est la même chose).

Fascinating travel back in time

What did you love best about The Diary of Samuel Pepys?

A fascinating look at life in an interesting moment of history. I loved his enjoyment of his new books, music, plays, and even that tasty venison patsy, all the time wheeling and dealing to improve his standing and serve the King.

Have you listened to any of Leighton Pugh’s other performances before? How does this one compare?

The narrator was remarkable. Who knew you you make reading diaries lively and so filled with emotion at times.

It would be impossible to listen to this all in one sitting.

I enjoyed the introductions and wished there was a summary at the end of the second volume that briefly told what Pepys did with the rest of his life.


Still listening to this.

Naxos are to be applauded for producing audio recordings of this quality.

And a heartfelt 'thanks' to Sam and the folk who worked out his code.

I have become so attached to this vain, selfish but so clever, erudite and charming man.....the stories delight me and I fall asleep to the dulcet tones of the orator.....don't want it to end. What an insight to the private lives and times of London people in the 1600s......and what a naughty boy....didn't read those bits out at school!

I have listened to all three unabridged volumes of Mr Pepys diaries read by Leighton Pugh. He has made it an easy matter for me to travel back 350 years and to actually feel part of the story. A great investment in both time and (low) expense.

Enjoyed the book but somewhat spoiled by the lack of translation in foreign language sections.

Some one who is bored with life.
I bought this book because I wanted the facts about the Fire of London, this subject was only in the last 3 chapters. The rest of the book was a total waste of time.
I had also bought another Samuel Pepys book ,this has only 4 chapters but fills in all the details missing in the first book

Would you listen to another book narrated by Leighton Pugh?

If you could play editor, what scene or scenes would you have cut from The Diary of Samuel Pepys?

All but the last three chapters.

I feel this book was a waste of time.