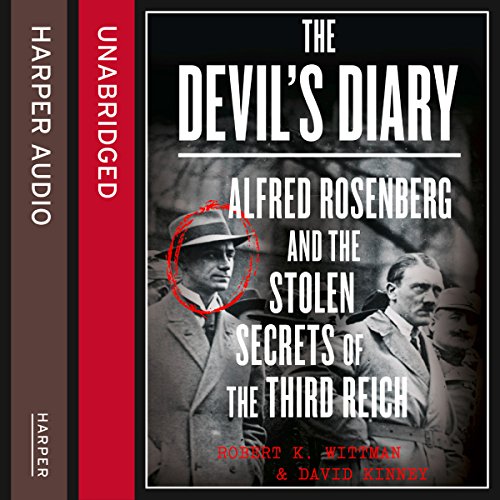 The Devil's Diary: Alfred Rosenberg and the Stolen Secrets of the Third Reich

An unprecedented, captivating narrative of the Nazi rise to power, the Holocaust, and Hitler's postinvasion plans for Russia told through the recently discovered lost diary of Alfred Rosenberg - Hitler's 'philosopher' and architect of Nazi ideology.

Only recently discovered by former FBI agent Robert Wittman, the diary of Nazi philosopher Alfred Rosenberg, who led the Nazi party when Hitler was interned in 1923, is a groundbreaking document and an object of rumour, obsession and evil.

Filled with observations, conversations and Nazi plans, it gives new details of Hitler's rise to power and personal governance of the Reich. Not simply the Nazi ideological progenitor, Rosenberg was a core member of Hitler's inner circle: his ideas for the Third Reich and the destruction it wrought laid the foundations for a brainwashed nation and gave its people the justification for the slaughter of millions; he helped plan the Nazi invasion and subsequent occupation of the Soviet Union and was named Reich Minister for the Eastern Territories.

With the first access to the diary's contents, The Devil's Diary is the thrilling story of Rosenberg; Robert Kempner, the German-born Jewish Nuremberg lawyer who prosecuted Göring and Frick and stole the diary; Henry Mayer, the archivist who has doggedly been searching for it for decades; and Bob Wittman, the former FBI agent who finally found it and returned it to its rightful place.

"A fascinating scholarly detective story centring on the often overlooked ideological architect of the Third Reich.... The authors do an excellent job of teasing out the fine details and placing them in the larger context, in the bargain offering overdue acknowledgement of Kempner's many contributions to the short-lived effort to bring Nazis to judgement. A footnote to a much larger story but a welcome one." (Kirkus)

What listeners say about The Devil's Diary: Alfred Rosenberg and the Stolen Secrets of the Third Reich

When fools come to power

Would you listen to The Devil's Diary: Alfred Rosenberg and the Stolen Secrets of the Third Reich again? Why?

Yes probably. This book is an excellent account of the Nazi Party, from its formation in the 1920s right through to its fall and the Nuremberg trials of the 1940s. If I did re listen it would more to familiarise myself with the chronological events leading up to, and during world war two rather than anything to do with the diary itself, although the diary is very interesting too!

I would probably say Robert Kempner, the Jewish refugee who fled to America and became a lawyer. I didn't find him overwhelmingly appealing, but he at least appeared to be the one guy trying to do the right thing amongst all the Nazis discussed in the book who were hell bent on making the most horrendous choices.

Have you listened to any of P. J. Ochlan’s other performances? How does this one compare?

I haven't listened to previous performances by this narrator. He was very clear throughout which is always good however, I didn't personally enjoy this narrator as much as others I've come across, hence I knocked off a star!

This would make a very interesting film but it would be very tricky to do since the book follows historical events, using the diary as a guide as opposed to heavily focusing on the diary itself. It might be more interesting to make a film about the Jewish refugee Robert Kempner, who came to have Rosenberg's diary in his possession during the Nuremberg trials and held onto it. Biographical details on Kempner intersperse the historical account of the Nazi party throughout. These details aren't terribly exciting but given what was going on at the time they are quite interesting.

Overall this is an excellent book based loosely on the diary of Alfred Rosenberg. I say loosely at the book does diverge to discuss other issues taking place such as Nazi policy, Nazi party members etc. I appreciated these divergences from Rosenberg as it allowed me to see a wider picture of what was taking place at the time. The sheer stupidity of the Nazi party never ceases to amaze me in both word and deed. If you would like to know more about the Nazi party, this book is a must read.