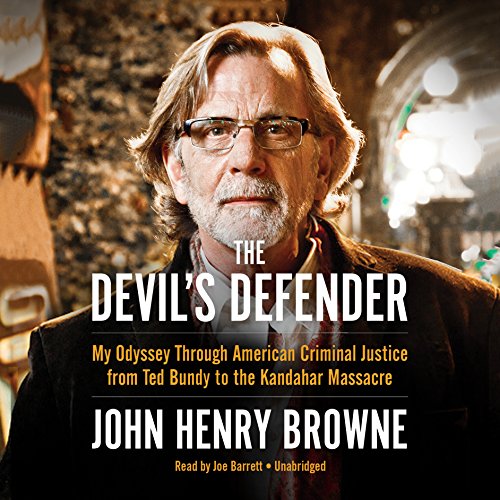 In the tradition of best-selling legal memoirs from Johnnie Cochran, F. Lee Bailey, Gerry Spence, and Alan Dershowitz, John Henry Browne's The Devil's Defender recounts his tortuous education in what it means to be an advocate - and a human being.

For the last four decades, Browne has defended the indefensible. From Facebook folk hero the "Barefoot Bandit" Colton Moore, to Benjamin Ng of the Wah Mee massacre and Kandahar massacre culprit Sergeant Robert Bales, Browne's unceasing advocacy and the daring to take on some of the most unwinnable cases - and nearly win them all - has led 48 Hours' Peter Van Sant to call him "the most famous lawyer in America." But although the Browne that America has come to know cuts a dashing and confident figure, he has forever been haunted by his job as counsel to Ted Bundy, the most infamous serial killer in American history.

Browne, a drug- and alcohol-addicted yet wildly successful defense attorney who could never let go of the case that started it all, here asks himself the question others have asked him all along: Does defending evil make you evil too?

What listeners say about The Devil's Defender

This is a good read by a good man. I had hoped though that being Bundy's Lawyer, he would have elaborated and offered some never before released details of Ted's awful crimes.

Despite his strong beliefs against the death penalty, I still struggle to see how he could have not shown his disgust to Ted personally more openly and directly. Ted respected him, and so perhaps would have made an impact on Ted. I would like to have heard Ted's responses.

An amazing Lawyer, it seems, and with a level of intelligence most of us wish we could have been born with.

Not what it promises

If you're looking for a true crime thriller written by the defense attorney, read the one about John Wayne gacy. This book barley has anything about bundy and what little it does is real outside peripheral. It's mostly about his life as a lawyer but he makes even drugs and rock n roll feel dull. I didn't finish it, I returned the book

Would you try another book from John Henry Browne and/or Joe Barrett?

no. he talked as if his book would be all about Bundy, but he did not tell us anything that was already known. I we very disappointed

Would you ever listen to anything by John Henry Browne again?

If you could play editor, what scene or scenes would you have cut from The Devil's Defender?

disappointed not worth the money

I went from admiring him to not really liking him. The narrator was wonderful.

If I could give 0 stars, I would

I couldn't finish. He starts saying Ted Bundy told him he chose him as an attorney because they were so much alike, insists then that it's untrue, then proceeds with a narcissistic narrative, bragging about attempting to cope the VP with LSD, stealing secret documents and name dropping gun such a manner one could only imagine Bundy would have, had he had the same opportunity. This guy's wealth and connections allowed him to lead a charmed life, but Bundy was right in recognizing himself in his attorney. I don't believe a more self absorbed person exists.

Joe Barrett was the perfect narrator for this book. He made it sound like he was the person who experienced the thoughts and emotions of the writer. And the author, John Henry Browne, sure can make dull court cases into an enthralling story. I felt personally involved with Ted Bundy in particular. Totally enjoyed it.

It was alright, not too exciting, but overall...

It was alright, not too exciting, but overall an interesting listen. Not many cases or details.

I liked this book but the voice of the narrator was so unlike the author's that it bothered me.

is this the real life? is it a fantasy?

the only thing more interesting than the book itself is that it's all real life..

Browne’s staggering egoism and self promotion does not bury an otherwise interesting tale.

With the exception of the lengthy and familiar discussion of the Bundy catastrophe, Browne’s unfortunate personality traits are outweighed by the fascination of his less familiar cases. Browne ponders how charming young Bobby Bales became mass murderer Sgt. Robert Bales. I’m more interested in understanding how the delightful teenager raised in Leave It To Beaverland became the Eddy Haskell who wrote this book.

When I found myself struggling to get through chapters, it was time to quit it. Not my thing

Really interesting and well narrated . Good read for anyone interested in true crime and law.