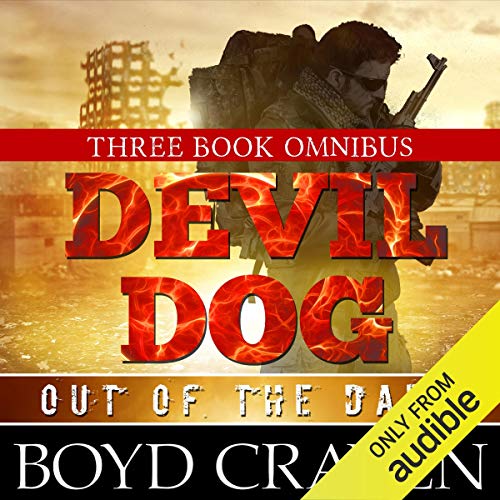 The Devil Dog Trilogy: Out of the Dark

The Devil Dog Trilogy: Out of the Dark

Dick aka Devil Dog's world changes drastically when the EMP takes out the power grid. The loss of electricity brings out the darker side of human nature across the city. A homeless Marine veteran living in the abandoned tunnels beneath Chicago, he's far better prepared than most people. Good folk have survived, but they are often outnumbered and outgunned. Only the tunnels provide the safety he needs.

Devil Dog becomes the reluctant savior of women and children from the worst of the gangs that now rule topside. Doing the right thing makes him new enemies, driving him ever deeper into the tunnels that keep his charges safe - until he runs across a young woman who might be his daughter.

With the horrors of Chicago put down hard, Dick aka Devil Dog, Jamie, Mel, Luis, and Courtney head west, where they are hoping to reunite with family. There are only a few problems along the way.... Only a few.

Rabid Cannibals, hunted by psychotic raiders, and a town that's forcing a "tithe" on travelers and a government gone wild...all before the main event....

If you like a good old-fashioned "good guys vs. bad guys" fast-action and a post-apocalyptic thriller, you're going to love the Devil Dog Saga.

The Devil’s Due, book three:

Dick is finally clean - mind and body - from his poisonous addiction, only to be sent reeling again upon awakening and discovering Steve and Jamie have startling secrets of their own. It will take every ounce of focus and resolve to shake off his new reality and make a trek to Arkansas to reunite with his wife and daughter, especially with the other challenges he faces along the way. He thought he was ready to face the world anew, until he realized the world was out to get him first.

Devil Dog III is the ending to the action-packed prepper thriller trilogy, filled with real-life gut-wrenching decisions, and a twist so sharp it may snap your neck.

Great trilogy ending left a lot to be desired. Too many unanswered questions and too many things just fall into place too conveniently in order to finish the trilogy felt rushed.

I have well over a month of listening time to this genre and I have to say this is one of the good one! A story within a story...

Found this entertaining throughout. I think the second book was the best and only once or twice, during this three book journey, did I want the story to “get in with it” but really you never wait long for that. It did get a little situationally repetitive at times and the narrator doesn’t differentiate his characters amazingly but it did not detract from the enjoyment. Would def “read” another of this authors stories even with the same narrator.

Oh Boyd Craven you little devil. Never saw that ending coming. WOW. Love the characters, they become friends, I found myself cheering them along. Kevin Pierce does an awesome job of bringing the story to life.

I bought the trilogy and dove straight in mainly because it was narrated by Mr. Pierce who was the voice of Franklin Hortons series and didn't really expect what I got from the series.
Although my story has a different ending and of course the world hasn't gone shit as much as this story has portrayed, changed some names and this could have been me.
so maybe you could understand the I don't want to finish and the I must finish the series delima I faced.
fortunately my "Mary and Maggie" encouraged me to follow through. I'm glad I did. For those who were never down range, it was a small glimpse into the struggles.
I would read or listen to them again and will recommend.

loved it. ending is jaw dropping but great. once again Boyd is the man, need some more.

My fave was 3rd

I was so curious about what other reviews said about the ending that I couldn’t wait to get there. I wasn’t as surprised as I expected to be. I suspected it but it was so well written that if you weren’t paying close attention you might be blindsided.
Having the 3 books together was great for an extended listen(and for one credit!). The first really got me interested in the characters and storyline. I’ve never been into the prepper/apocalypse genre but it didn’t seem “out there” and is well written so it moved along quickly.
I was worried that the 2nd & 3rd would have to rehash so much that I’d get bored but it didn’t happen, again- well written not repetitive.
The 2nd didn’t capture my attention as much as the 1st but provided good details and you really get to know the characters well. The 3rd was my favorite since it brought it all together and by then , with hours & hours of listening, I felt committed to it.
I did feel like I wanted a little bit more to the story. Just a few chapters of “what does he do now?/what happens to the country now?) But then again that may be a completely different series.
A big take away- PTSD is real. Done well in books of fiction-it brings home that point solidly.

I listen to a lot of books on the extinction of the American Way of life. This one was far more believable , as in life there are Protectors, Prey, and Predators. And being also a true crime fan, Kevin Pierce is a favorite narrator of mine. Overall this book was a character driven book with great personalities. Violence , but no real gore. Long , but includes three volumes.

A survival story that's not sloshing with gore.

This series has been an enjoyable listen. A test of humanity inside and out. Dispatching of all the gore that's common in such distopian stories as this. The author brings us into the struggles of our own minds. Showing us that real pain shows no scars.

If you haven’t read or listened to any of this authors books, fix that immediately! The story has so much depth that I cannot fathom how he does it.

a different kind of survivor series with a deep story line many characters stretching from Chicago to texas and everqhere in between . vigilante survivor politician 9f sorts and more