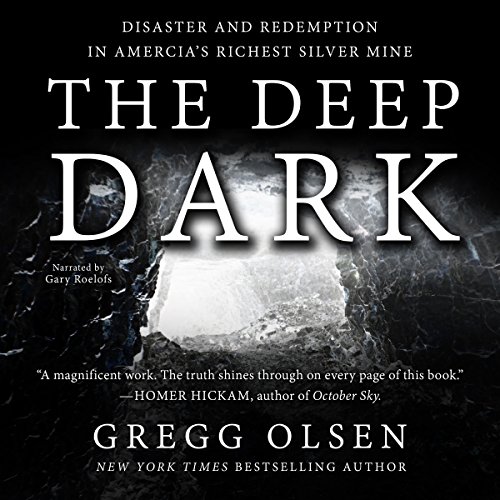 For nearly a century, Kellogg, Idaho, was home to America's richest silver mine, Sunshine Mine. Mining there, as everywhere, was not an easy life, but regardless of the risk, there was something about being underground, the lure of hitting a deep vein of silver. The promise of good money and the intense bonds of friendship brought men back year after year. Mining is about being a man and a fighter in a job where tomorrow always brings the hope of a big score.

On May 2, 1972, 174 miners entered Sunshine Mine on their daily quest for silver. Aboveground, safety engineer Bob Launhardt sat in his office, filing his usual mountain of federal and state paperwork. From his office window he could see the air shafts that fed fresh air into the mine, more than a mile below the surface. The air shafts usually emitted only tiny coughs of exhaust; unlike dangerously combustible coal mines, Sunshine was a fireproof hardrock mine, nothing but cold, dripping wet stone. There were many safety concerns at Sunshine, but fire wasn't one of them. The men and the company swore the mine was unburnable, so when thick black smoke began pouring from one of the air shafts, Launhardt was as amazed as he was alarmed.

When the alarm sounded, less than half of the dayshift was able to return to the surface. The others were trapped underground, too deep in the mine to escape. Scores of miners died almost immediately, frozen in place as they drilled, ate lunch, napped, or chatted. No one knew what was burning or where the smoke had come from. But in one of the deepest corners of the mine, Ron Flory and Tom Wilkinson were left alone and in total darkness, surviving off a trickle of fresh air from a borehole.

The miners' families waited and prayed, while Launhardt, reeling from the shock of losing so many men on his watch, refused to close up the mine or give up the search until he could be sure that no one was left underground.

What listeners say about The Deep Dark

This book is excellent and full of great detail. The true story of the 1972 silver mine fire in Idaho was a disaster that resulted in the people and their town to be changed forever. I recommend this book to anyone. Just be warned that there are graphic parts pertaining to the condition of those that were killed.

The narration is horrible.

I found this to be a great story about a tragedy I was never aware of. Mr. Olsen obviously did a tremendous job in his research for this book. However, this is one of the three worst narrators I've ever heard (I have heard roughly 150 Audible books). He couldn't pronounce the name of a popular Indian tribe, he would start and stop repeatedly, and he doesn't know how to end a sentence. It's sad. I feel that having this narrator did the survivors and their families a great disservice. It's a well researched and written story. It should have been told MUCH better.

Started out not so great, but very glad I stayed w

The first part, hour or more, I was rather irritated at the narrator who seemed to be affecting this “grizzled old miner’s” manner of speaking, and I hate that fakery in narrations and I avoid books where it’s not just reading the book, it is “performing” it. Also, it did seem like a lot of the introductory info wasn’t going anywhere, and I hate that, too. But hey, it’s Gregg Olsen, I’ve got to keep on... Never encountered a GO book that wasn’t totally worth it.

I do want to comment, however, all throughout the book there are numerous flaws in the narration that definitely should have been cleaned up. It ticks me off that Audible doesn’t seem to take this care anymore, just push it out for sale and on to the next. Things like the narrator pausing briefly saying “two seconds” then continuing. This happened many times. Also quite a few mispronunciations that he corrected and continued on. Obviously those items should have been cut out but that would not be his job. For all this type thing, of which there were many in total, I do not blame the narrator at all.

So, all that said, this is an incredible work. Some might complain about the depth Gregg goes into about each of the personalities involved, the life of underground miners, their families, etc. But he tells it like no one else can. You are THERE and it is all completely absorbing and real. No dramatics, no cute fluff added or needed. This was a story of all real life.

The sum total of the story angered me, of course, but notably lacking from the telling was any attempt at manipulation of my emotions. Or at least, it may have been so skillfully done that I was unaware of it. The bare facts, looked at from various perspectives of those involved, and still around to talk about it, were enough to make me both angry but also to confirm my understanding of how the world we live in works. And doesn’t work. No surprises there, really. But Gregg has a clarity in understanding and relating this stuff like no one else.

I was a young single mother at the time of this tragedy and not the news hound that I am now, but I do remember hearing about remnants of it on TV. No internet then! So it was quite satisfying to me to get all the breadth and depth about it that Gregg was able to put into it, and for that I am grateful to him.

If you have even a mild interest in this event and wonder what “really” went on, you will not be disappointed in this work.

Enjoyed the content of the book but hated the narration. The narrator doesn't know how to end a sentence. Theavk of tone ending makes all the sentences run together. I will never buy another Audible book with this narrator.

Great book. Terrifying. So so narration.

The book was good. A really great account of a truly terrifying circumstance. I watched a video documentary and got to see the faces of the survivors telling the same stories as they’re told in the book. The details given in the book are a lot more illustrative so it’s a really intense story.

It would have been a lot more immersive if the narration wasn’t so poor. Very staccato. Lots of odd pacing and undulations in the readers cadence. The only bummer about the experience.

I have to say Gregg Olsen is in a league of his own. All his books are so different you never know what to expect. This book is not what I usually would read but I really liked it and am glad I did. Dont miss this one.

I live about an hour away from the Sunshine mine. I was young when it happened and don't remember much about it. The story was very good but really sad. What those miners went through because of NO Regulations, greed, and extremely poor administration. I had learned so much about mining, miners, and their families. A great book for a book club to discuss!