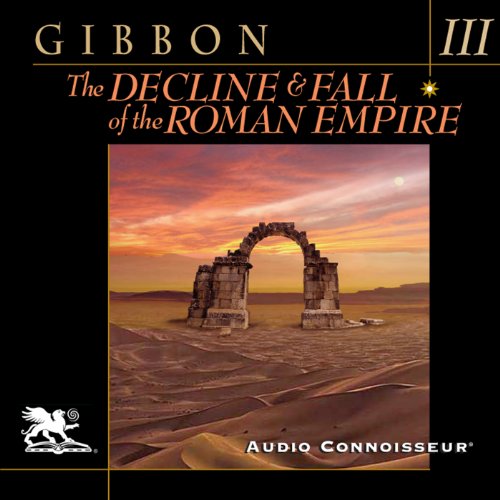 The Decline and Fall of the Roman Empire, Volume Three

In Volume Three, Gibbon picks up his story with the chaotic events following the retreat of the Eastern Roman Empire from the Italian peninsula in the seventh century. As the German conquerors settle into the new territories they took from the old Roman Empire, Islam suddenly emerges on the Arabian peninsula and sweeps across North Africa and into Spain. Muslim forces move north and threaten Constantinople itself.

This marks the beginning of an 800 year struggle between the Byzantine Empire and Islam. Gibbon describes in breathtaking style the last years of Constantinople and its final death struggle with the Ottoman Empire.

What listeners say about The Decline and Fall of the Roman Empire, Volume Three

I loved this series of books. The story was rich with history which, I have been unable to find, short of Caesar and Christ by Will Durant.
The narrator did a wonderful job, with this lengthy manuscript.

If you think Eastern people are degenerate, take your Religious bigotry with a Know Nothing flair, Gibbon is your guy. Book contains reading errors as Reader clears throat so editing mixed.

Gibbon helped create several myths so he must be understood and this is the most painless way to do so.