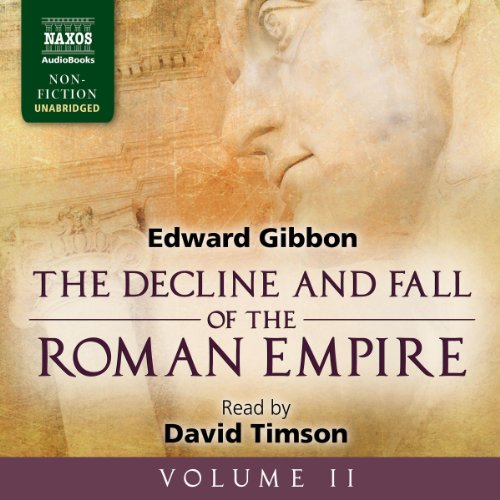 The Decline and Fall of the Roman Empire, Volume II

By: Edward Gibbon
Narrated by: David Timson
Series: The Decline and Fall of the Roman Empire, Book 2
Length: 22 hrs and 31 mins
Categories: History, Ancient
4.5 out of 5 stars 4.5 (2 ratings)

The Decline and Fall of the Roman Empire, Volume II

The Decline and Fall of the Roman Empire has always maintained its initial appeal to both the general public and scholars alike. Its sheer scale is daunting, encompassing over a millennium of history, covering not merely the Western Empire from the days of the early emperors to its extinction in AD 476, but also the Eastern Empire, which lasted for another thousand years until the Turks vanquished it in 1453. But Gibbon’s style, part historical fact and part literature, is enticing, and the sheer honesty of the man, who endeavours to be scrupulously impartial in his presentation, endears him to the reader. In this recording, David Timson incorporates the most salient of Gibbon’s footnotes.

In Volume II (Chapters XVI-XXVI), Gibbon continues his powerful history of the Empire, shining the spotlight on some of the best-known figures and their impact on the growing influence of Christianity, including Nero and, three centuries later, Constantine, whose establishment of Constantinople resulted in the division of the Empire into East and West. Gibbon also presents a sympathetic portrait of Julian, whose wisdom, courage and clarity bore the hallmarks of the great emperor that Rome needed.

This version includes Gibbon's lengthy (and often essential) footnotes, inserted into the body of the text (with the words "footnote" and "end footnote" before and after). I believe the result is the best audiobook version of this classic. The reader is excellent: always energetic, while bringing the required weight, wit, and occasional sarcasm into his delivery.

I'm just a sucker for the subject

Gibbon writes beautifully and captures the reader well. Compelling characters and events the form into a beautiful drama about a civilization. Big fan of Julian the apostate especially.

Tried to hang in there for 9 chapters thinking it would come around. Please refund my wasted money for this one.