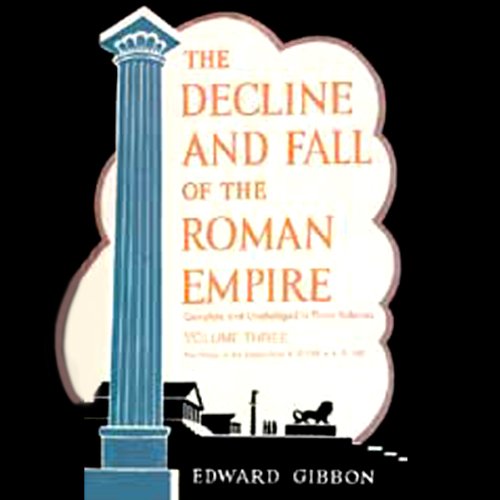 The Decline and Fall of the Roman Empire, Volume 3

Considered one of the finest historical works in the English language, The Decline and Fall of the Roman Empire is lauded for its graceful, elegant prose style as much as for its grand scope and considerable accuracy. It is a remarkable survey of what the author calls "the greatest and, perhaps, most awful scene in the history of mankind."

This third volume of Gibbon's masterpiece covers the years A.D. 1185 to A.D. 1453 and explores the rise of Islam, the Crusades, the invention of gunpowder, Genghis Khan and the Mongol invasions, the Turkish conquests, and the beginning of the Renaissance.

The publication of this work in 1788 ended 20 years of Gibbon's contemplation and vast research on his subject and made this virtually self-educated man the most famous historian of his time.

"[Gibbon] stood on the summit of the Renaissance achievement and looked back over the waste of history to ancient Rome, as from one mountain top to another." (Christopher Dawson)

What listeners say about The Decline and Fall of the Roman Empire, Volume 3

An Amazing Piece of History

There was some drudgery with the minor, post Constantine emperors. I was also not as excited by the HRE sections as I was by the sections on the Rise of Islam, the Mongols, the Ottoman Empire, and the Crusades. Those sections alone are why I rated the second half 5 stars and not 4. Anyway, a fantastic read. Ironic to finish it right after S&P lowers our national credit rating and our senators again fail to do anything productive. Thrilled that so much effort was put into making this available in Audio format.

Ancient History At Its Best

This exhaustive history is one of the best on the subject. Gibbon knew his material and gave us one of the greatest works about the long period that this history covers. Where this history might seem long and tedious in places, it is made up for by the numerous explanations of battles and descriptions of the cities and characters of the times. Where Gibbon sometimes seems to opinionated about the times and people, he gives reasons for this and helps the listener to understand the circumstances and ideas of the times. The narration is at times tedious as well. You get the idea that you are in a college lecture hall rather than listening to the reading of a book. Bernard Mayes does a good job with the material. Overall, I would recommend this set of volumes to anyone who is interested in the hisory of the world. Others will find this material tedious and boring at times. My advice? Give a listen and stick with this. You might find out some things that you didn't know and might find this history as extremely interesting as I have.

The Prophet Mohammed, his followers and successors, and the rise and spread of Islam. The empires of Ghengis Kahn, Timour the Lame, Charlemagne, and Mahomet II. Orthodox iconoclasts and Catholic image worshippers. Popes and anti-Popes. Hyperactive Norman Robber-Adventurers. The zeal, ignorance, and "baleful fountain of holy war" of the Crusades. Rapacious acts and pusillanimity aplenty. Some heroism for hope. Everywhere ambition, pride, scheming, and betrayals. Greek fire, gunpowder, sea battles, and wars involving the deaths or slavery of tens of thousands. The state of Rome in the waning middle ages. The long decline of the Eastern Empire culminating in the inevitable fall of Constantinople.

When I finished the third and final audiobook volume of Edward Gibbon's The Decline and Fall of the Roman Empire, including the fifth and sixth volumes (1788-89) of his classic six-volume history, I felt fulfilled. The roughly 120 hours of the three audiobook volumes take the reader from about the 2nd century AD till about the middle of the 15th, from when the empire was a young single entity through its division into two, Eastern and Western, and recounting their respective declines and falls and relationships with each other and with the major barbarian and other civilizations that came and went. The history is everywhere uplifted by Gibbon's Age of Enlightenment reason, moderation, humanity, and elegant and witty prose.

Bernard Mayes, ever the avuncular, dryly enthusiastic British guide, is a perfect reader for the long history, occasionally nearly succumbing to his own fatigue at so much declining and falling, but ever enhancing Gibbon's love for the material, never missing a beat, mangling a rhythm, or mispronouncing a word. Gibbon's lively notes are missing from the audiobook, so I recommend getting one of the several e-books of his history so as to be able to peruse them.

The third volume, like the first two, teems with lines full of wit and wisdom, pathos and comedy:

"Ambition is a weed of quick and early vegetation in the vineyard of Christ."

"The dominion of priests is most odious to a liberal spirit."

"Solitude is the school of genius."

"Of human life, the most glorious or humble prospects are alike soon bound by the sepulcher."

"In speech they (Bulgarians, Hungarians, and Russians) were slow, in action prompt, in treaty perfidious. . . . Whatever they saw, they coveted; their desires were insatiate, and their sole industry was the hand of violence and rapine."

"The discipline of the soldier is formed by exercise rather than by study. . . the battles won by lessons of tactics may be numbered with the epic poems created from the rules of criticism."

"If we contrast the rapid progress of this mischievous discovery [gunpowder] with the slow and laborious advances of reason, science, and the arts of peace, a philosopher, according to his temper, will laugh or weep at the folly of mankind."

And with vivid portraits of key historical figures:

"In the blaze of prosperity, [the Tribune Rienzi's] virtues were insensibly tinctured with the adjacent vices; justice with cruelty, liberality with profusion, and the desire of fame with puerile and ostentatious vanity."

"Of the three popes, John the Twenty-third was the first victim: he fled and was brought back a prisoner: the most scandalous charges were suppressed; the vicar of Christ was only accused of piracy, murder, rape, sodomy, and incest."

"[The Hermit Peter's] stature was small, his appearance contemptible, but his eye was keen and lively, and he possessed that vehemence of speech that seldom fails to impart the persuasion of the soul."

"Bold and subtle, rapacious and profuse, the avarice and ambition of Apocaucus [enemy of John Cantacuzene] were by turns subservient to each other; and his talents were applied to the ruin of his country."

"A beautiful female, a matron in rank, a prostitute in manners, instructed the Younger Andronicus in the rudiments of love; but he had reason to suspect the nocturnal visits of a rival; and a stranger passing through the streets was pierced by the arrows of his guards, who were placed in ambush at her door. That stranger was his brother, Prince Manuel, who languished and died of his wound…"

If the first audiobook volume has the most compelling figure in the history, the Apostate Emperor Julian, and the second one the most compelling supporting players (like Belisarius), this third one has the most charismatic city, Constantinople, the capital of the Eastern Empire, inhabited by wealthy, decadent, proud, weak, and short-sighted people. After a selective but lengthy listing of the many tongue-twisting titles for the specialized ranks of Byzantine hierarchy, among them Autocrator (emperor) Sebastocrator (sub-emperor), Logothete (accountant), Protovestiare (wardrobe), Dragoman (interpreter of foreign ambassadors), and Protostrator (horse assistant), Gibbon says: "Their honors and emoluments, their dress and titles, their mutual salutations and respective preeminence, were balanced with more exquisite labor than would have fixed the constitution of a free people; and the code was almost perfect when this baseless fabric, the monument of pride and servitude, was forever buried in the ruins of the empire." He takes a nearly perverse pleasure in detailing how "The Greeks, by their intestine divisions, were the authors of their final ruin."

Gibbon's account of the taking of Constantinople by the Turks in 1453 after a furious 53-day siege is gripping. Ancient weapons (bows and catapults) fighting with modern ones (guns and gigantic canons). Irony and drama abounding, as when the last Greek emperor, Constantine, gives a morale raising speech, which turns out to be "the funeral oration of the empire;" as when, the Ottoman Janissaries, Christian tribute slaves molded into elite Moslem infantry, storm the Christian capital; or as when "The Greeks and Turks were involved in a cloud of [artillery barrage] smoke which could only be dispelled by the final deliverance or destruction of the Roman empire."

For the intrepid, Gibbon's history gives much literary pleasure and historical insight, and is well worth the time it demands.

Would you listen to The Decline and Fall of the Roman Empire, Volume 3 again? Why?

What was one of the most memorable moments of The Decline and Fall of the Roman Empire, Volume 3?

The final fall of Constantinople

It's a marathon and the reader could be better. For example, in the case of the city of Nicea, he at first says Neekay, then Neesay and finally Nighsee, but never Nighseeuh.

Extremely Complex to Digest in One Pass

Would you listen to The Decline and Fall of the Roman Empire, Volume 3 again? Why?

I would have to, or read it then listen again. Gibbon's history is extremely compressed and, thinly covered, as to characters and events, plus he uses indirect references which require keeping the thread that actually refers to what he is talking about. Nevertheless, it is stimulating to read further.